Published 21 September 2016 by Events and Tours

Part of a busy pedestrian route near Waterloo station is about to be partially sealed off — for a PR stunt.

A missive gushes that “speedy pavement pedestrians will no longer need to get stuck behind those dawdling or playing on their phones, thanks to London’s first-ever pedestrian fast lane at Waterloo.”

The 50-metre segregated lane will be carved out of the existing pavement, and is being sponsored by an insurance firm on Thursday and Friday.

The brandname plastered fast lane will only allow those walking over 3 mph (the average walking speed) and not using their phones or dawdling.

The press release generously notes that “those traveling at a slower pace will be free to use the rest of the pavement.”

You the fast walkers will have access to the VIP enclosure, sponsored by a brandname while the plebs, the disabled, the elderly, those with children shall be confined to the now reduced width of the lower class pavement.

Now, as a fast walker, yes, actually I’d love a fast lane, and many a reader was once fooled by a similar announcement for Oxford Street, on April Fools Day.

However, this is not a fast lane, it’s a PR stunt by a company looking for some cheap publicity. But more heinously in my mind, they aren’t adding capacity to the pavement, but sealing off part of a public, and often very busy path for their own commercial gain.

I am sure harried commuters leaving Waterloo Station over the next couple of days will delight at finding a busy path suddenly more crowded than normal.

A spokesperson for the insurance firm gushed that “although only open for two days in London, it has the potential to go nationwide, we want to encourage councils across the country to do the same.”

Frankly, I hope not. 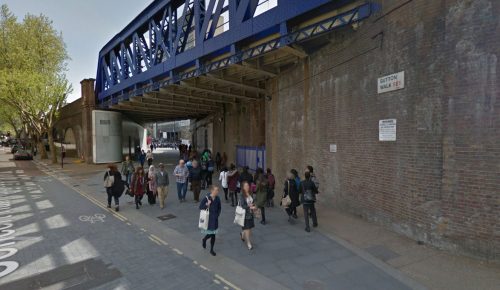