There is often told tales by the subterranean conspiracy lot of a private entrance inside Westminster tube station that our elected masters can use to get into the Parliamentary Estate – should they deign to travel by London Underground.

I find it amusing that such tales get spread as the secret entrance is actually in full view of anyone who walks past it – and it has a sign on the door saying what it is. I mean, that it is an entrance, not that it is a secret. 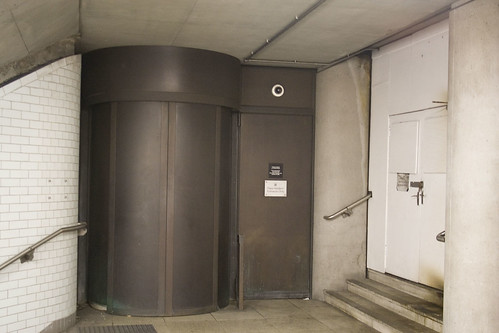 It’s actually not in Westminster Tube, but next to the subway that runs under the road – and which often provides a much faster way of crossing the road than the congested traffic lights by Parliament Square.

Also, while the general public cant use it, neither is it limited to MPs. Anyone with a permanent pass to Parliament can use it. The restriction on the general public is simply because it doesn’t have the necessary bag search systems in place.

I actually find it fascinating how such rumours of secret tunnels and hidden doorways are invented then spread without question or investigation, especially when the truth is in plain sight.

Oh, and while we are on the topic, no there isn’t a private tube train to Buckingham Palace. Why put the Royal Family on a tube train to Heathrow in the middle of a coup/war, when they would be expected to take helicopters to RAF Northolt?