Readers with very good memories may recall that just over a year ago, I wrote a polemic about how the SouthBank Centre’s website had redesigned its listings page in a way that made them essentially useless.

Well, praise where praise is due, for sometime last month, they launched a replacement listings page, and it is almost perfect.

Not quite, of course, for that would be a miracle, but oh, so much better than before.

What was a page of meaningless icons and headlines, with no information about the event has returned, nearly to what they had before, which is a simply top down listing of events, and a short sentence describing each event.

So thank you SouthBank Centre for ditching the “advent calendar” for something that is actually usable.

…if I may add, put back the “next month” option. Not sure why, but a lot of websites seem to be removing that at the moment, but if, for example, on the 20th Feb I wanted to see everything in March, I only got the first three weeks of March.

Not sure why websites seem to be ditching that option, but the SouthBank Centre isn’t the only one who limits searches to “next X days”.

Also, probably because I am a contrary sort who wants to see 30 days worth of stuff on one simple list, all the css/mouseovers etc, really causes the web browser to scream in agony — especially as I have to mouse over every single listing to see what it says.

Plain text works so much better don’t you think?

But it is still such a huge improvement on what was there before, so hurruh for good news.

Has finally been replaced with this: 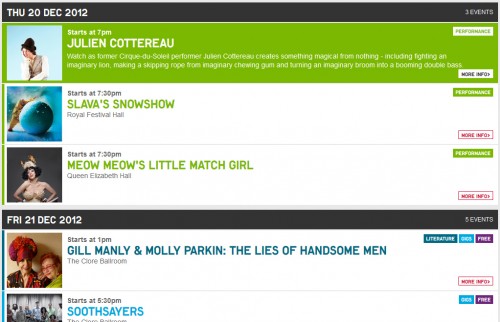