Imagine if you will the Crystal Palace in all its glory – but rather than a single impressive building in Hyde Park, or later down in Sydenham bend your imagination to thoughts of the grandest of grand Victorian visions, and encircle the centre of our Metropolis with a vast crystal snake.

This was the Great Victorian Way — a railway that would have run for 10 miles around London, and would have been contained within a Crystal Palace that even crossed the river at three locations.

Conceived by the same man who designed the Crystal Palace, Sir Joseph Paxton, this Crystalline Ouroboros would have run — clockwise — from London Bridge, down towards Lambeth, then leapt across the Thames to land just south of Parliament. Thence, around to where Slone Square, up towards Kensington and across the centre of Hyde Park. Passing Paddington, it would dip through Marylebone before sweeping back up to Kings Cross, then around past Barbican and down to Bank once again.

A one-mile spur would have run into the centre of London from the south, terminating at today’s Picadilly Circus. 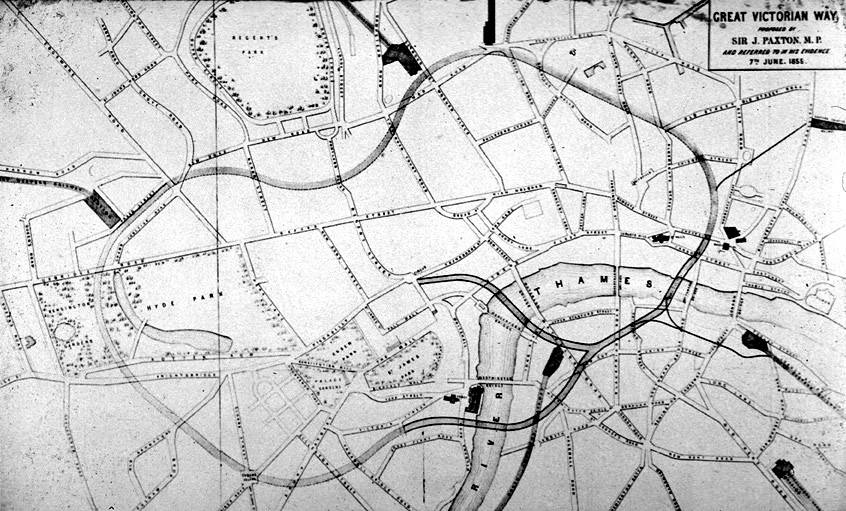 While I call this a railway, and its primary function was to relieve the congestion of the roads, the railway was but a small part of the proposed structure which would have included shops, housing and a private road running alongside the railways.

As described in a Parliamentary report on “Metropolitan Communications in 1855, this “vast scheme contemplates reaching all the railways coming into London,” and that “it possesses in its details […] many features of remarkable novelty”.

Apart from its length, the structure was equally impressive in width and height. A glass-roofed arcade was planned, some 72 feet wide and 108 high covering a central road. The road would have been lined with shops in some areas, and houses in others. At Kensington, the arcade would be opened up as a public promenade. The plan was the road would be open to trades in the morning for deliveries, but then restricted to cabs and omnibuses for the rest of the day.

The purpose of the roofed arcade was to protect people within from the smokes and fumes of London’s polluted industrial air. It also aimed to protect the road from the weather, which at the time was an ongoing problem with horses churning up the mud and dust as the seasons desired. 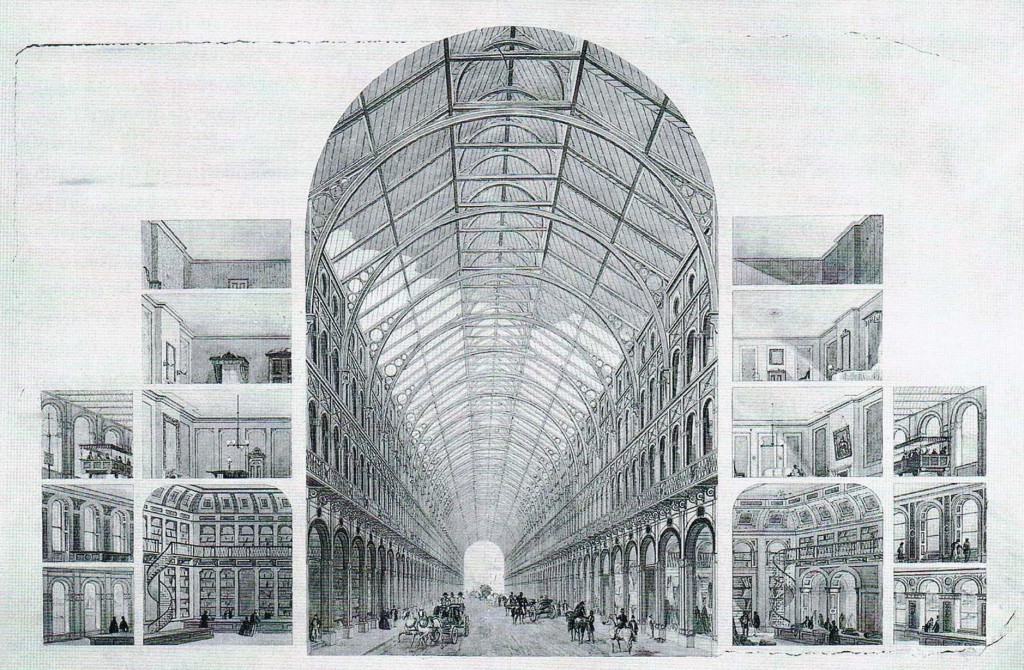 On an upper level, behind the shops would run a railway, with tracks running on either side of the main arcade. There would originally have been two tracks on either side, but in presenting his evidence to Parliament, Sir Joe said that he had already amended the plans for two additional lines above the two originally planned – giving eight tracks in total.

Four lines would be express services, and the other four would be intermediate stopping services. The express trains would have been able to travel about halfway around any part of the railway in just 15 minutes, which would still be a struggle today.

The railway was proposed to be of the Atmospheric design, which is pushed along by air pressure in a side tube. This wouldn’t have worked, and the design was supposed to be adaptable to be run with conventional steam locomotives. A double wall would prevent vibration from the railway affecting the houses underneath.

It was projected that around 105,000 passengers per day would use the railway.

While some people were talking at the time of subterranean railways, Sir Joe was scathing of the idea, telling the Parliamentary Committee that people would “never go under ground” to catch a railway. He was however right in dismissing other claims, that a 108-foot high structure crossing the river could impede the free flow of air along the Thames.

The railway would have always been at least 24 feet above the road – so that it could leap over existing streets that it crossed without demolishing everything in its path.

The total cost of this crystalline loop was put at around £34 million.

Sir Joe claimed to have the support of Prince Albert for his Girdle around London, but Parliament was not impressed. The Daily Telegraph was not entirely convinced either: “We must protest against being disturbed in our slumbers by a whistle and a roar overhead.”

The scheme was not approved, because it was too expensive and he was seeking government support for the financing.

But what if it had been?

Setting aside the railway for a moment, the sheer size of the building would have transformed how people look at London, as the city within and without in a way that hadn’t existed since Mediaeval times.

Even if the railway had later been submerged into the ground to free up surface space occupied by the Iron and glass girdle that encircled the centre, its footprint on London would still be obvious by how other buildings and roads adapted to its existence. Especially considering that with 8 railway lines, it would have been even more dominant a transport service than the Underground for probably the first 50 years of its life. 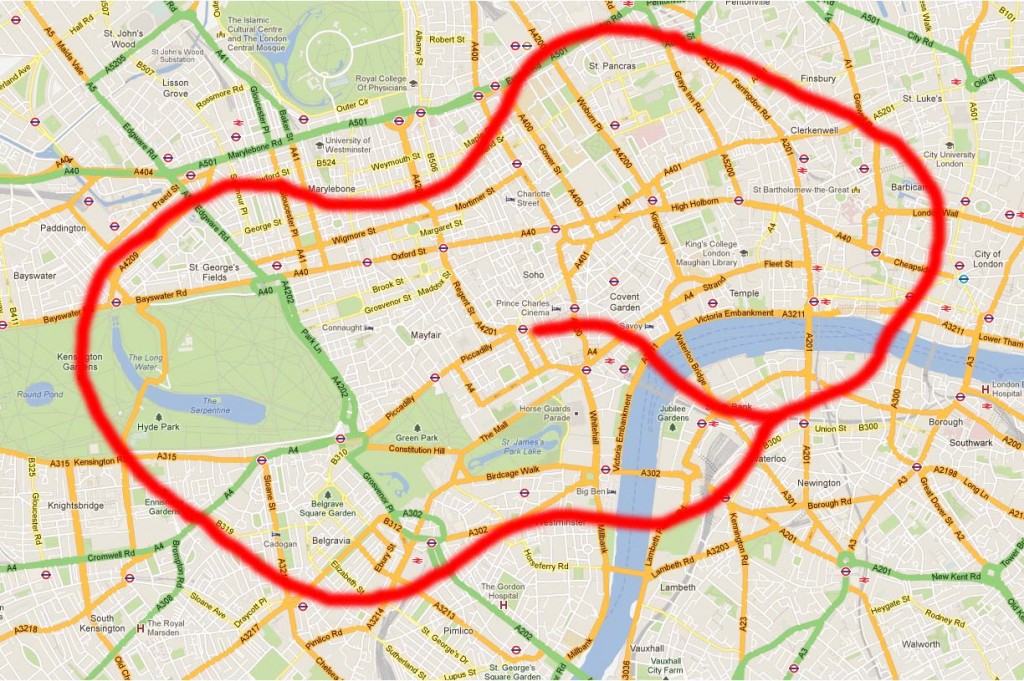 WW2 would have probably put paid to the railway and promenade as a single entity though, and it is likely that all we would have today would be a few isolated fragments dotted along the former line.

And an active vocal lobby calling for its complete restoration.