Over the Easter weekend a delayed plan to replace an old railway bridge swung into action as a road in North Dulwich was sealed off and handed over to an army of hard hat wearing builders and massive machines.

Replacing a bridge is a huge undertaking, and one that needs tons of planning to make sure that the old bridge can be removed, the new one put in place and the railway restored before trains want to use it again.

Easter is a convenient window to do this, although in fact the bridge was supposed to be replaced earlier this year, but the weather put paid to that. High winds and high cranes are not a good mix.

The local councillor was out and about, keeping an eye on things for residents, and as a self-confessed geek, enjoying every minute of the proceedings. As she said, this bridge is rated to last 200 years, so accidents aside, we will never see it being replaced in our lifetimes.

I was told that when a bridge a few roads down the line was replaced last year, the locals backed little railway cakes, but on the move date, we had a drizzle and rain to accompany the bridge.

The old bridge was well, very old and very tired, and the rumble of trains overhead was loudly accompanied by the cooing of pigeons beneath. Three cast iron poles supported the bridge on either side, but the replacement would need neither poles, nor offer accommodation to the pigeons. 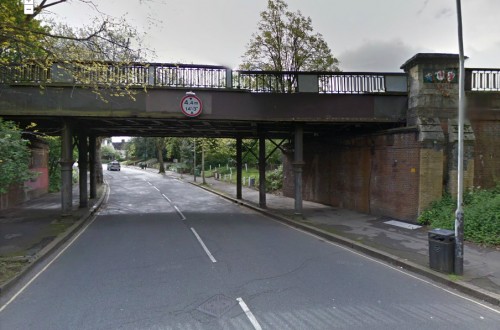 The décor is apparently a special shade of heritage green that is appropriate to the railway as it once was when the bridge was first built, and replica crests have been installed on the sides.

Some photos over the past few days:

The sealed off road ahead of the bridge removal 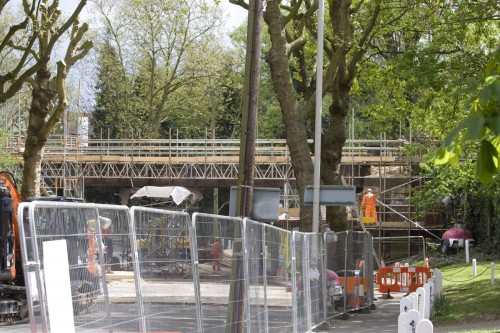 To lift a replacement bridge, you need a big crane. 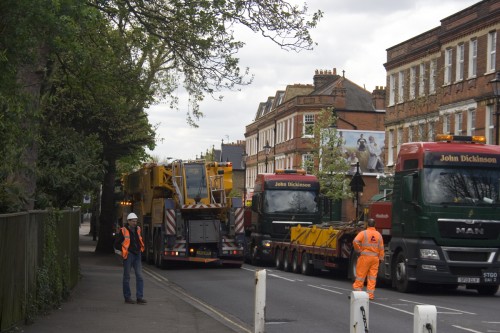 A very big crane. Best to give way when these come towards you 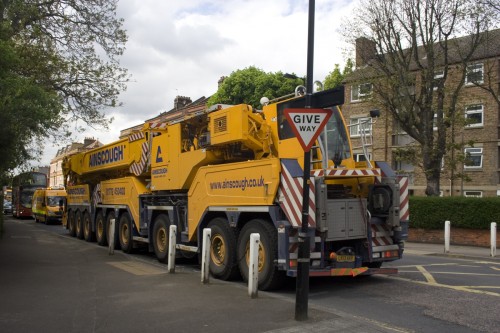 Nice wheel turning action to get into the narrow side street. 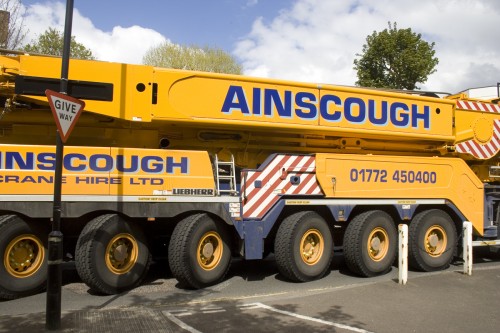 Looming over the area the following afternoon 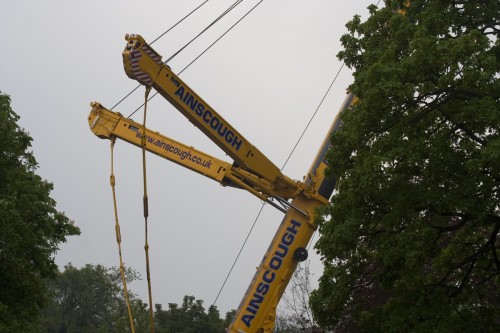 Two lengths of green railway bridge had arrived at 8am all the way from Wales.
With a police escort. 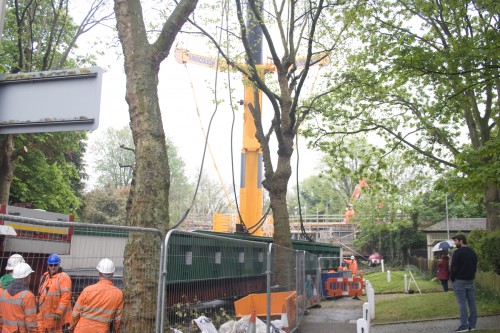 The old bridge was now missing, leaving just a maze of scaffolding in its wake.
The pigeons were most upset. 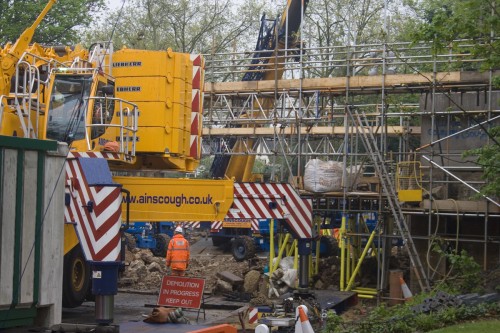 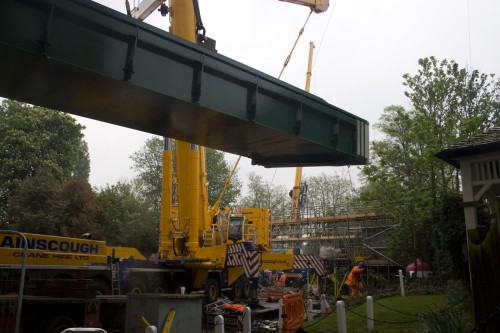 After a moment where the guide ropes got stuck in local branches, under which was sitting my camera lens bag, the bridge was free to fly again 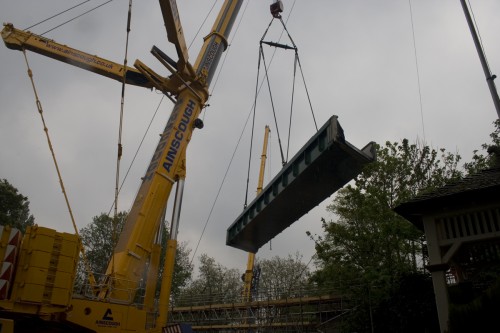 And swung around to slot neatly into place where the previous railway had sat for around 150 years. 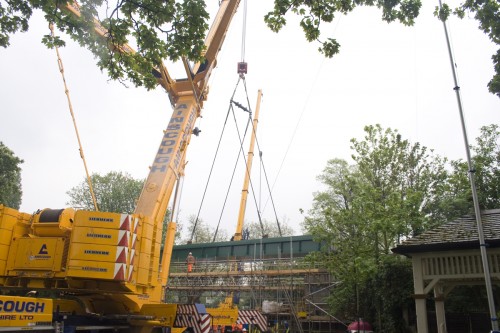 Despite the huge size, it took just four bolts to secure the bridge into place.
With some assistance from a crowbar and hammer. 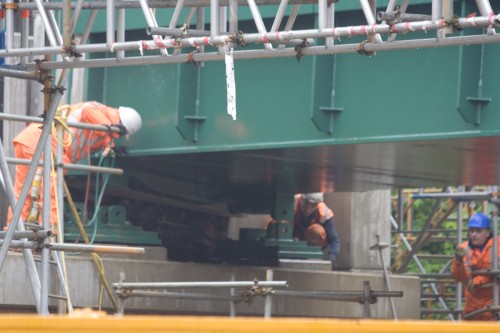 Bolt in place, several attempts needed.
It’s quite something that a crane can both carry upmteen tons of heavy metal, and yet also position it to near millimetre accuracy. 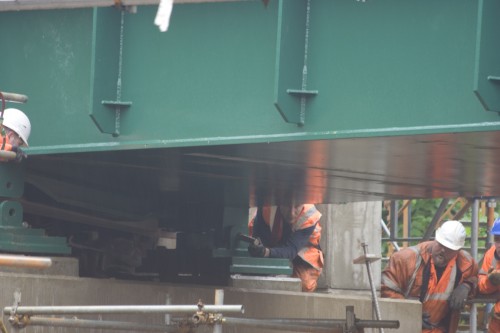 And one bolt in place. Just three more to go, then the second bridge after that. 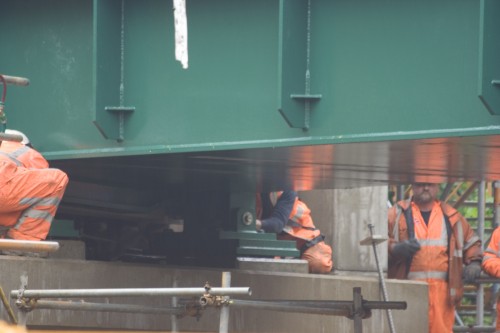 On the Tuesday, the bridge was firmly in place, with trains running overhead as builders clean up the work site below. 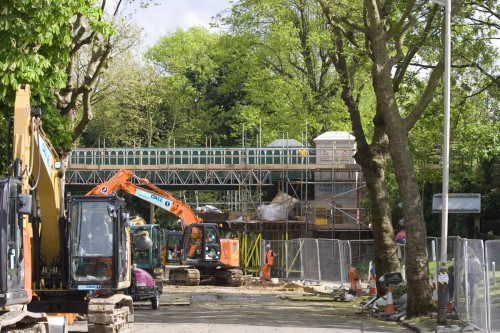 Fresh detailing on the new bridge to mirror the old balustrade. And replica crests on the stonework. 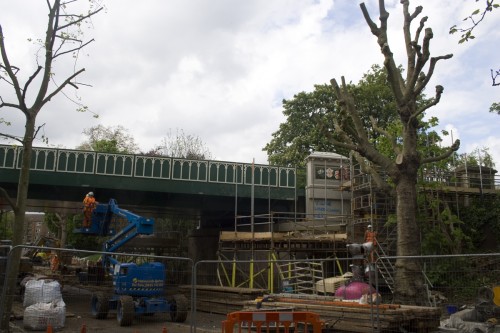 While trains rumble overhead, no pigeons will be roosting here.
Although I have my suspicions about the walkways on either side. Pigeons are stubborn like that. 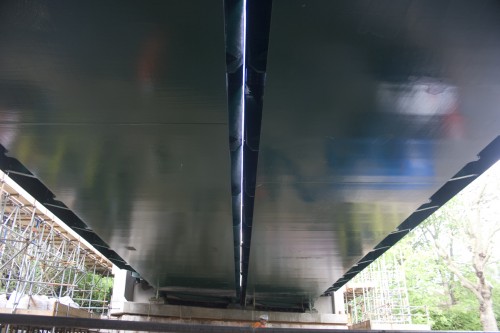 From above — a nearby vantage point.

The railway before the old bridge was removed 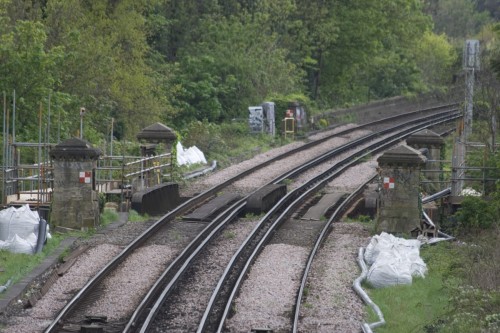 On the day of the removal 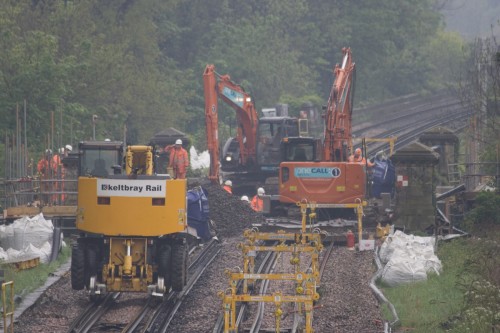 The new bridge in place 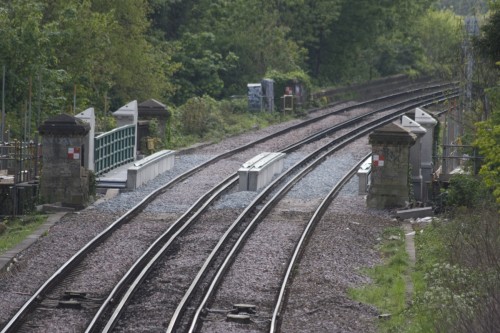 A weekend’s work, and that should now last another couple of hundred years before it needs replacing again.