Today, some 500 people will have the chance to walk through the Crossrail tunnel that runs under the Thames at Woolwich. Around 400 local residents were given first choice tickets, with the rest for the general public.

This is Crossrail’s only tunnel under the Thames, and also as it cuts through chalk instead of clay had to use different tunnel boring machine designs from the other tunnels across London.

Due to the placement of the portals on either side of the river, the tunnel curves in a backward S shape which gives it an unusually curved profile which at times can test the engineers controlling the TBM. Despite that, only once did they deviate more than 50mm from the target position while tunnelling.

There are also two side passages, for use in emergencies, and a 5-metre deep sump in the middle to collect water.

With some commentary, here are some photos from this morning:

In the future, this will be the entrance to the Woolwich station 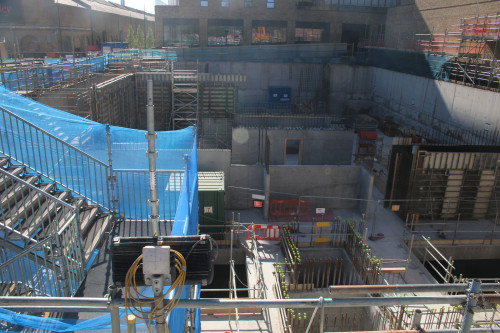 Inside the Woolwich station — the metal struts hanging down will hold the platform edge doors and barrier, as on the Jubilee Line extension. To see the station before it was fitted out, click here. 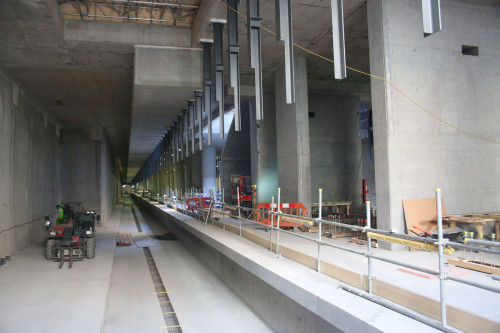 The entrance to the tunnel that runs under the Thames.

Today people walked westwards, along what will when finished, be the eastbound train line. 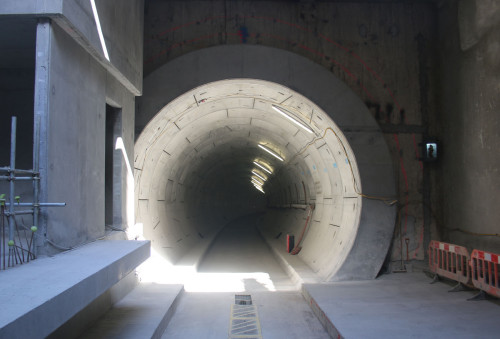 Inside the tunnel — the floor of the tunnel is the base level, and tilts slightly to assist in trains turning corners at speed. About another waist height of material is to be lain on top of the floor to take it up to track height. 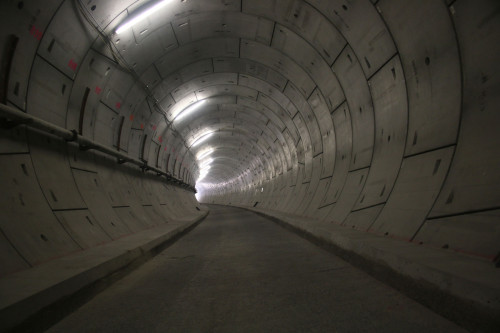 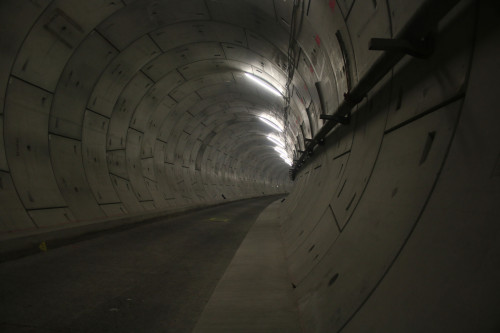 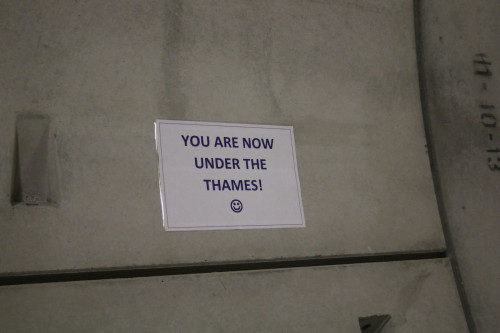 Here is the central section where the S curve twists on itself. 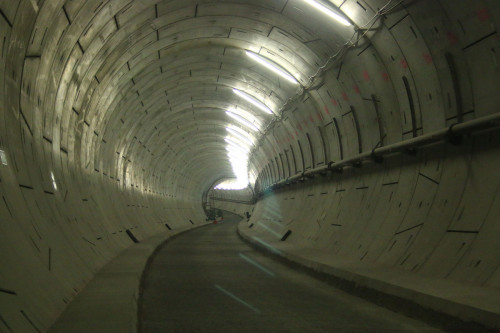 This is one of two side passages that were cut out of the tunnel after the TBM had passed by. These are still dug by machine-assisted manual labour. As the cross-passages are under the Thames, and in chalk, they had to fill the space between the tunnels with grout to reinforce the soil for tunneling, Although they still got a lot of water blasting into the tunnels at times, it was expected.

The southern of the two cross-passages also contains a hidden, but substantial 5-metre deep shaft which links to a drain at the deepest point in the tunnel — this is to absorb water that will eventually start to leak into the tunnel, before it is pumped away. 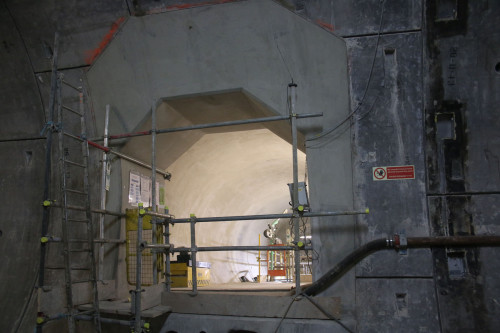 The manhole cover in the center here is the deepest point in the tunnel — that cover leads to a drainage tunnel running down to the sump mentioned above. 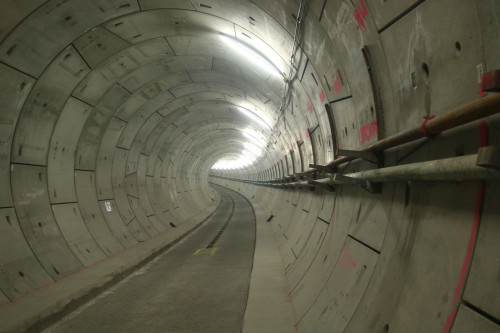 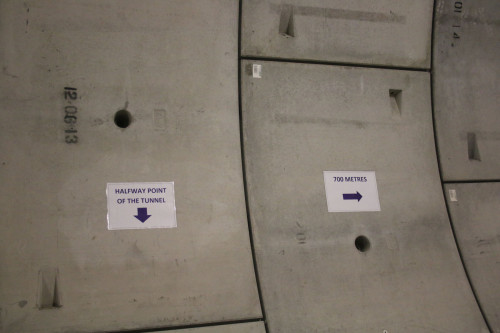 Purely for the photograph.

One of the lights was a slightly different colour, giving this interesting blue halo effect in the tunnel. 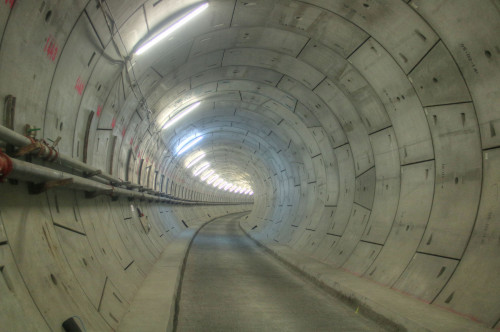 Nearing the end of the tunnel. 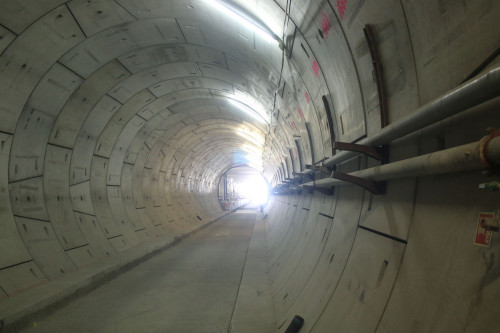 The end of the tunnel, and into the portal on the north side of the river. 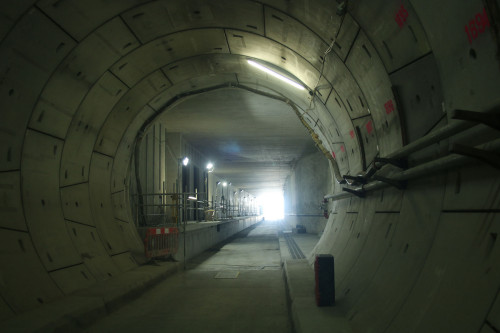 Looking back at the tunnel 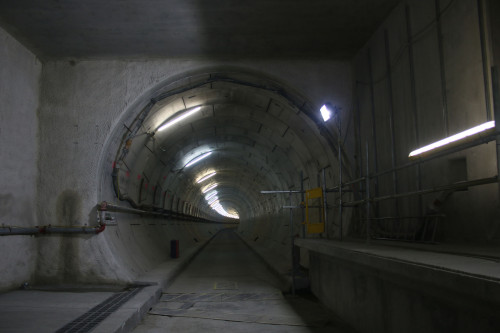 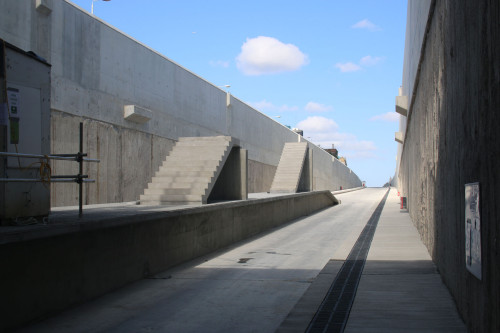 And finally, the portal slope leading down to the tunnels on the north side of the river.

In 3 years, Elizabeth line trains will be running where we stood. 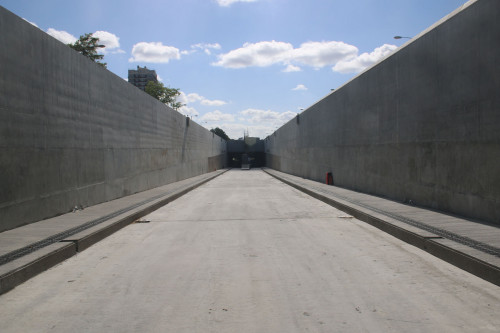