Published 25 May 2012 by By Ian Mansfield Transport News, Underground London

People using Farringdon station will not be unaware that a considerable amount of construction work has been taking place over the past few years, and may know that a lot of work is going to carry on as the Thameslink upgrade is completed, just in time for Crossrail to drill its way through the site.

Yesterday was a chance to have a look around the site – mainly from a Crossrail perspective, but Network Rail are also keen to show off their efforts on the site as they close down their construction site.

Railway heritage in London can be an often confusing mix of disused lines, renamed lines and stations moving around the place, and frankly, the Farringdon-Barbican-CityThameslink bit is probably one of the most complex bits of that railway heritage around.

And in a few years time, another set of railway lines will appear on the spaghetti junction of a map – for Crossrail. 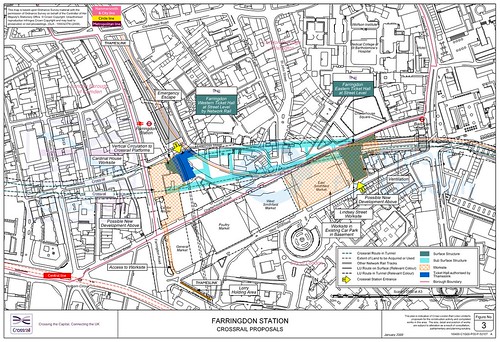 At Farringdon, the planning permission for the Thameslink upgrade was granted in 2006, but had to be revised when Crossrail was approved in 2008. This involved obvious changes to the new station entrance to ensure it would cope with the higher passenger numbers, lift shafts would need to be deeper than expected, and a lot of services that were to be upgraded would need more upgrades than planned.

So in essence, quite a bit of Crossrail construction at Farringdon has already taken place – but it’s all the hidden stuff that the public never see anyway.

Talking of hidden – the roof of the new building is interesting as it is a “brown roof” in that it will be covered in a couple of inches of soil and planted, not for the staff to enjoy but for wildlife. This one roof represents 20% of the local council’s land reclamation target, and I personally thoroughly approve of such things. 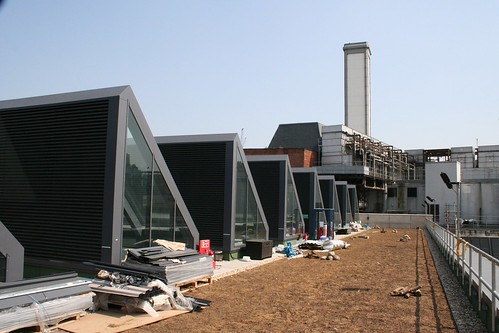 You’ll also be able to see a hint of the hidden stuff next week when an exhibition of the history and upgrade is opened in the old Pharmacy outside the tube station entrance.

An interesting curiosity is that although this is a site used by two different railways, the entire site is owned by London Underground and the Thameslink franchise, First Capital Connect basically rent capacity. However, during the recent refurbishment, it was decided that the new control room would be a joint centre for both tube and Thameslink, and space exists for Crossrail to put their staff in there as well later on.

Should make communications between the teams easier, and it now strikes me as curious that the same thing wasn’t done at the new Blackfriars Station where the two sides sit in separate rooms.

They have now taken over several building sites in the area, including a huge one right next to the new Farringdon Station building, where they are now starting to dig down to create reception chambers for the Tunnel Boring Machines that should arrive next March on their journey from Paddington. 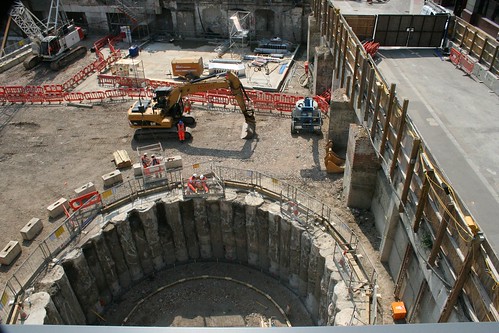 If you are a tunnel boring machine (TBM), then Farringdon is actually a bit of a pain to drill through.

Remember, this was originally the Fleet river until it was turned into a sewer, so the soil here is different to most of the trip from Paddington, and TBMs prefer their soil to be consistent. Also, there is a fault line running right across the line of the tunnels and the soil on the other side is different again.

Original plans a few years ago were to avoid the use of TBMs altogether, then that was to use a special TBM at this spot – but now they will drill straight through because it is expected that the staff using them will be sufficiently experienced by next March to deal with any problems that crop up.

Another interesting innovation is how the new buildings are being supported on the deep piles that are driven into the soil. These are double-lined steel tubes filled with concrete and the intention is that the building is supported on the inner tube, and when the TBM arrives and shakes up the soil and causes expected subsidence, the outer tube will slip down without affecting the building above.

As you can’t replace the foundations of old buildings, to prevent subsidence elsewhere, they are drilling shafts into the ground then pumping concrete out sideways in a fan shape to compensate for the loss of soil underneath.

Some of these are just a hole in the ground with pipes fanning out – and some are vast structures underneath Finsbury Circus that will leave behind a concrete web that would probably look not that dissimilar to a giant fish backbone swimming in the clay above the railway tunnel.

When Crossrail arrives at Farringdon, it will continue towards Barbican and its route here takes it underneath the historic Smithfield Meat Market, which will need works underneath to stop the TBM causing subsidence.

Fortunately, there is a large set of disused railway tracks right underneath the meat market already, and they make a suitable place to drill down without causing too much interference above ground.

And obviously, a chance for us to go and take a wander through these abandoned railway lines and take photos!

They won’t be abandoned forever though for when Crossrail leave the site, it will be handed back to London Underground who plan to convert the site into sidings for tube trains so that there is a more central location to keep them overnight.

Works are taking place under here right now to make it safe for staff to walk around the place, with lighting being installed as we were there. The gloom proving to be a challenge for the camera (really should have brought my floodlight with me) but it does add to the atmosphere! 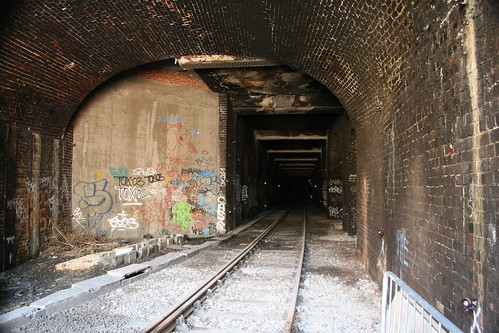 Entrance portal at Barbican end - Sealed off bit goes to a modern car park that took over part of the site. 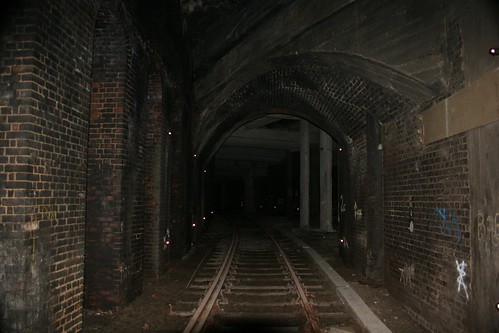 Victorian arches - the dots of light are movement sensors reflecting the light of my camera. 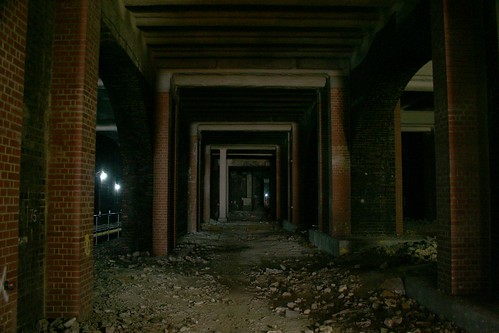 Modern brick work upgrades and fireproofing of the old arches 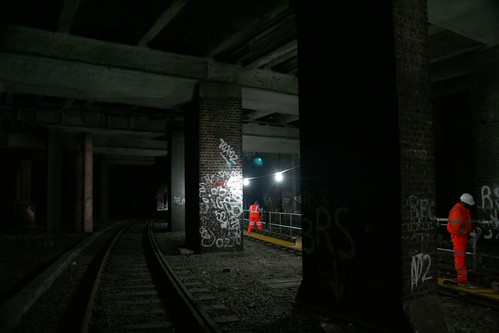 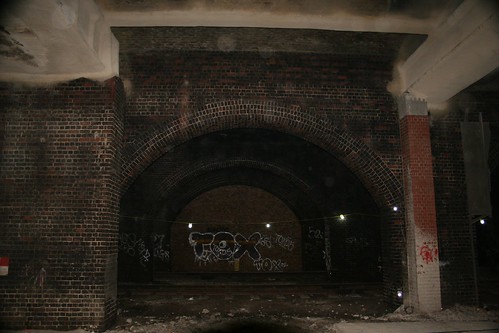 The old arches and modern inserts - and graffiti 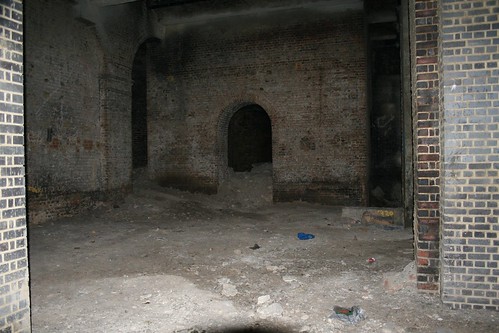 Although they didn’t come out in the photos, we could see the remains of the original “holes in the roof” from our perspective or holes in the floor from the meat market’s perspective that allowed meat to be hoisted up from the railway wagons below straight into the market.

One curiosity to finish with is in a side bit of the brick arches near the Barbican end, and here was originally a rest room for the station staff squashed into a narrow gap. Long abandoned, the chimney is slowly falling down and the original iron cooker is still there, covered in rubble and muck.

As a part of the site it has no use to the builders and will probably be left untouched and maybe in 100 years time it will still be there imperceptibly decaying in the darkness for one of my successors to take a photo of and write about. 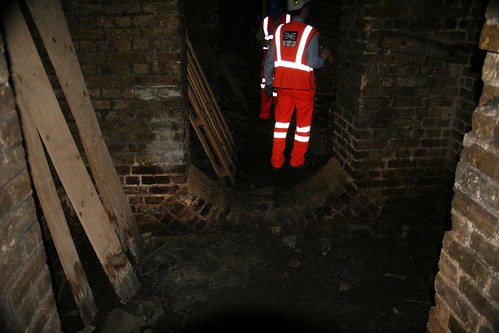 Thanks to the staff at Network Rail, Crossrail and FCC for the site visit, even if they did manage to choose one of the hottest days ever to be wandering around in heavy boots and overalls! Not sure how the builders cope with that throughout the summer months.

The full set of photos can be seen here.