In a few weeks time, the fifth of Crossrail’s eight tunnel boring machines will join the other four already underground and start grinding its way through the soil leaving behind a  slick grey concrete tunnel in its wake.

This tunnel will run from a part of the Crossrail project that hasn’t garnered all that much publicity being right out on the eastern-fringes of the tunnelling project – at Plumstead. This will be the point where the tunnels end and the trains run above ground to Abbey Wood – the very final station on the line. 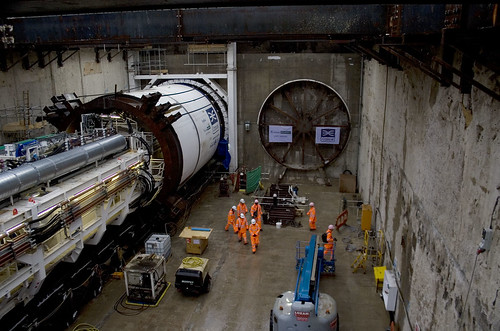 This tunnel from Plumstead to Woolwich, under the Thames and then to North Woolwich is technically Contract C310 and was awarded to a joint venture comprising: Hochtief Construction and J Murphy & Sons. Those two companies were also responsible for the Thames tunnels for High-Speed 1, and they learnt a lot about the problems in dealing with South London’s unforgiving geology on that project, to implement them here.

North London has nice clay to dig though – but South London is chalk.

Rather than churning up the soil as it burrows through the chalk, the TBMs pressurize the cutting head with a special fluid, Bentonite (which is also used to make cat litter!) and then it mixes the chalk and flints with water to create a soup. This is then pumped out to a treatment plant in Plumstead. Here, the liquid chalk is separated and the chalk is dried into large “cakes”. 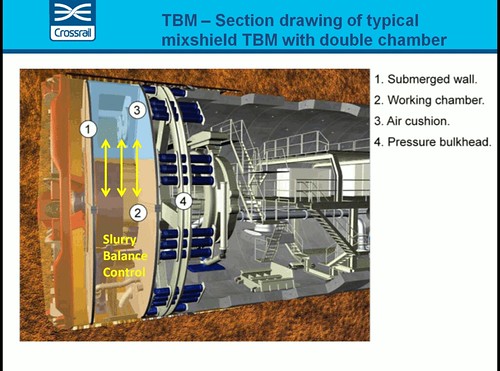 While the clay dug out north of the Thames is being sent to create a nature reserve in Wallasey Island, the chalk from south London may – although not signed off yet – be sent to Northfleet to fill in old chalk quarries so they can be used for housing.

Curiously, it is at Northfleet that the clay from North London is transferred from rail to barges to be sent to the nature reserve.

But back to Plumstead.

On a thin strip of land right next to the existing overground railway, they have constructed a concrete sloping portal that leads down to where the tunnels will emerge, and over the past month, they have been assembling the first of the two 1,000 ton machines that will dig the tunnels.

To give an idea of how big these machines are – a photo from a crane above with a normal passenger train passing by the TBM which you can see sitting down in the portal next to it. 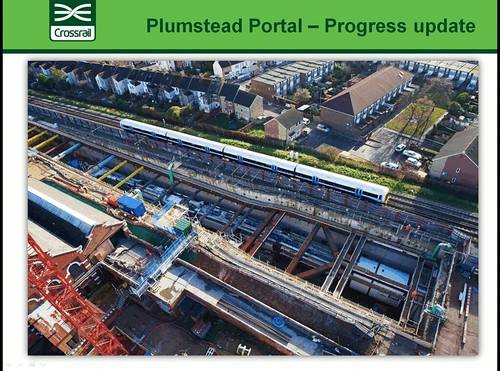 They expect to launch the first TBM in early January, with the second following a few months later.

Apart from the difficulty of assembling both next to each other in the portal, the main reason why both machines aren’t digging together is that they would churn out too much chalk-soup for the processing plant to cope with. Also, they consume too much electricity. As it is, EDF had to install a new dedicated power line to the construction site, otherwise, Plumstead might have seen its lights go out.

The construction site is also slightly hampered by having two listed buildings right next to it – one empty, but the other contains an electricity sub-station and also sits directly above the future Crossrail tunnels.

As is traditional, each of the tunnel boring machines have been given a name. This is Sophia, named after the wife of Marc Brunel, who started the first tunnel to cross under the Thames in 1825. 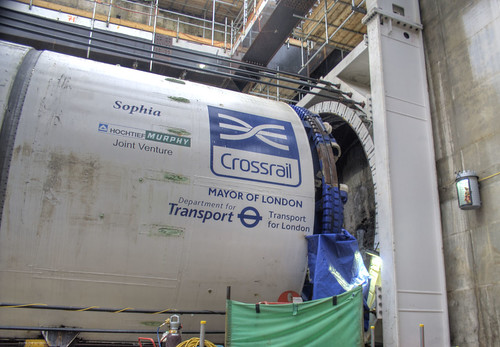 Another tradition, which is mainly German, but spreading, and quite apt here as the TBMs came from Germany is an icon to St Barbara, the patron saint of miners which has been put on the wall between the two tunnel entrances. Note the two hammers, for the West Ham football club. This is a football loving saint. 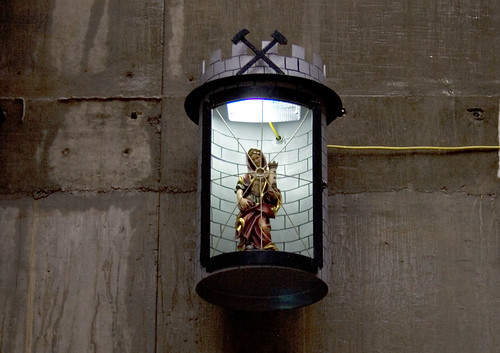 Once launched next month, the first TBM will drill along to Woolwich, where it will enter the empty station box and rest, while the second TBM will then follow behind. They will then separately dig about 2 metres above the DLR tunnels, then down to around 15 metres under the Thames and re-emerge in a portal at North Woolwich. 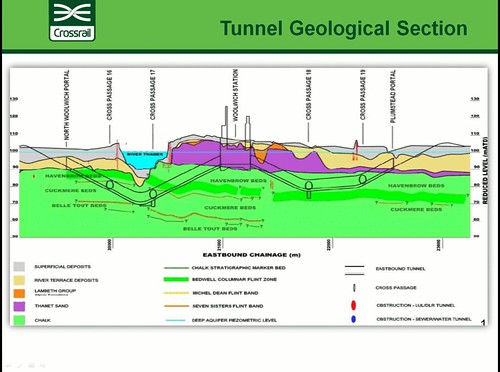 Slide by Crossrail – note, is compressed horizontally. The tunnels aren’t that steep!

You can see where the TBMs are at any time under London via this map.

After the tunnels are dug out, the Plumstead site will later take on new importance though, as it is where the tunnel fit-out will start for the eastern tunnels from around 2014.

But right now, they are still completing the assembly work on the TBM, although they will get a few days off over Xmas, as once the TBM starts, it will be working 24/7 with three shifts per day. 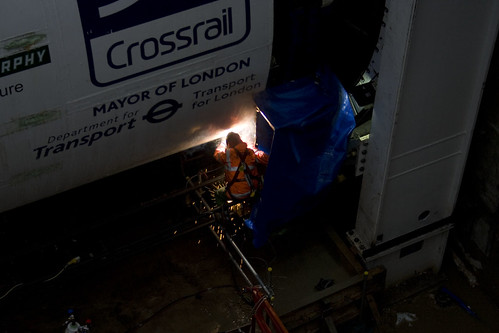 When they chew through the soil, concrete rings will be inserted behind the cutter head to form the eventual tunnel. Curiously, while most of the concrete ring segments for Crossrail are coming from dedicated plants in North London and at Chatham, the ones for this bit of tunnel come from Ireland. The rings are slightly different here, and the tunnel length is too short to build a bespoke factory – so they bought them from a factory in Ireland that happens to be able to supply what they need.

Each stack makes up one ring in the tunnel. 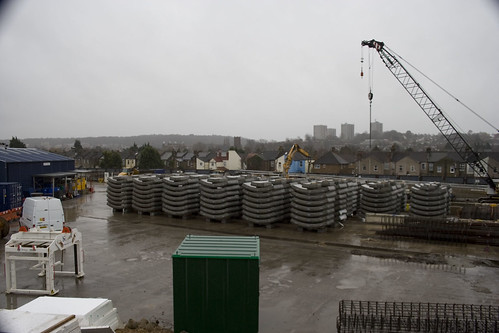 These TBMs are huge machines that grind through dirt and muck all day, but are exceptionally complex machines once you get up close to the “tail” behind the main cutting head and seem curiously unprotected from the dirt. Of course, the exposed tail will be inside the newly lain concrete tunnel by then, so doesn’t need the protective walls around it. 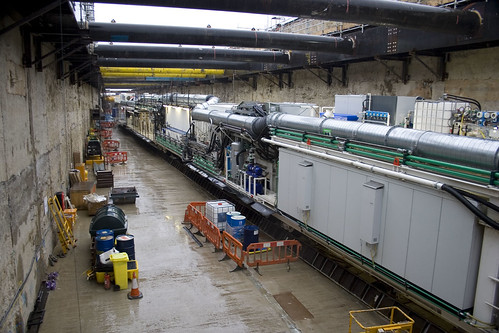 For those of us in the tunnel portal though, it was a miserably cold and wet morning. Of course, the rain stopped as soon as we finished the site visit.