Deep under Euston station lies a network of long-disused tunnels and a tiny ticket office that have rarely been seen by anyone for over 50 years, until now.

As part of the Transport Museum’s Hidden London series, there has been a chance to go down and see them.

The disused tunnels have been in this state ever since the 1960s when the newly built Victoria line arrived, and new tunnels replaced the old, leaving the old sealed off and, for the general public, largely forgotten. 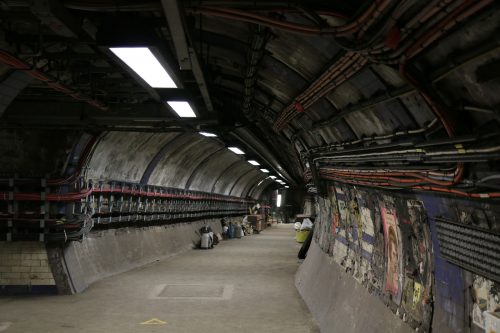 When the two branches of the Northern line were originally constructed, they were built by two competing companies — and the mainline railway company insisted that they have two separate entrances.

In a concession, they were allowed to have a shared entrance inside the mainline station. Like all stations of the time, this had lifts that took passengers down, and here, they could turn left to the Charing Cross branch, or right to the Bank branch.

Unsurprisingly, customers found the entrance inside the mainline station considerably more convenient than the outside stations, and in 1914, those were closed down.

One has since been demolished, and the other now serves, as does most “disused” tunnels under London, as a ventilation shaft for the tube network.

In the 1960s though, they built the Victoria Line, so in addition to a new ticket hall, and more controversially, a new mainline station, they reshaped the Northern line tunnels.

Gone went the old connecting tunnel, in favour of the current layout, and those old tunnels were sealed off. Today they serve a dual function of ventilating the station, and as storage for maintenance.

Oh, and that old tube station entrance that used to be inside the mainline station, that went as well, but its location can be found, as it is now the ventilation shaft above the Nandos outside the modern station.

Starting in the remaining external station, which is still clad in its original ox-blood tiles, was a chance to see what a ventilation shaft looks like from above. Which is to say, a large metal tube with a very noisy fan.

Remnants of the old station tiling inside could be seen, but realistically, it’s a machine room, albeit something never really seen by people. 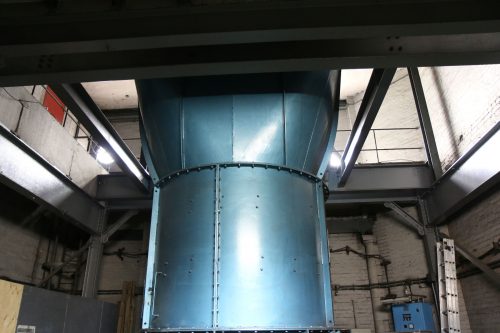 Of course, that’s a nice aperitif, but what you want is the main course, which is to be found waiting deep down on one of the Northern line platforms.

(click on any of the photos for larger versions)

A door unlocked, and a staircase that would be familiar to many as most stations have similar designs, but instantly mysterious with exposed cables and wires bolted brutally into formally carefully decorated walls and left exposed for all to see. 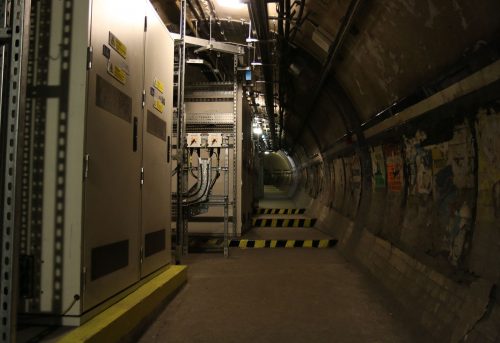 This is the nature of tunnels that were once used by passengers and are now the realm of the tube staff — a once polished tiled rudely punched through with scarcely a thought to decorative appeal — all is functional where people wont see it. 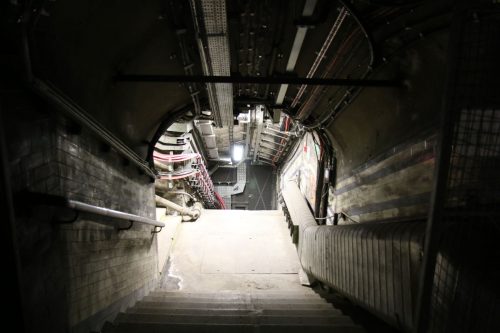 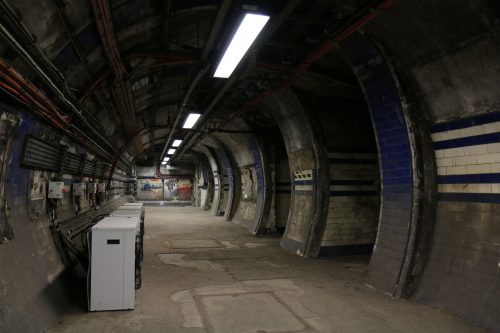 No need to clear away old posters, so in this most industrial of space, adverts for holidays, for plays, the theatre, hairdressing. All the lingering echoes of swinging London in the 1960s still down here underneath the modern intrusions. 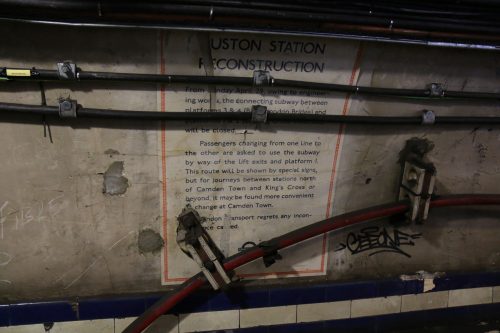 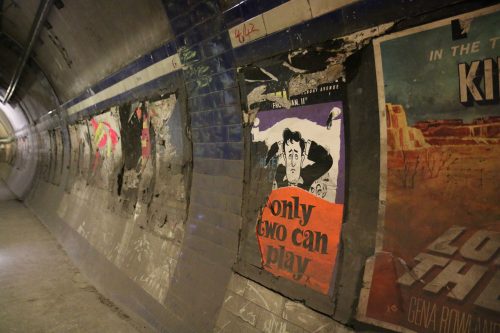 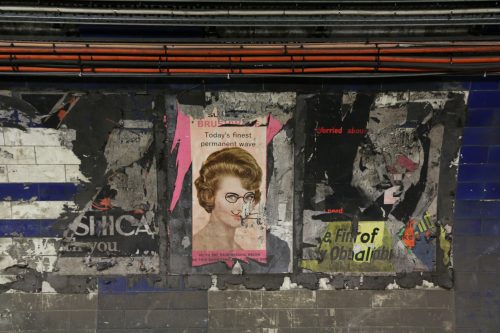 One of the oddest things to find down here though, deep in the tunnel network, is a tiny ticket office. Sitting in the corridor between the two underground lines, is a fully built ticket office with the tiling and decoration you normally find on the surface.

In the gloom, with the blacked-out room behind, it’s a bizarre sight. 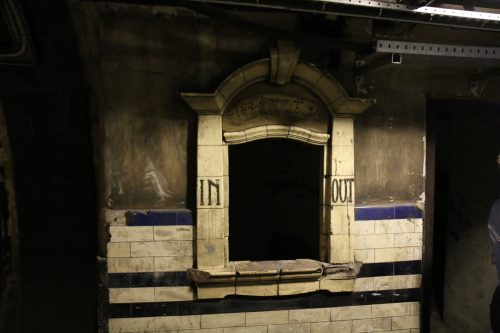 Its purpose is a legacy of a time when the two branches of the Northern line were separate companies, and passengers needed different tickets for each one. So passengers switching lines at Euston could go to the surface to buy a ticket, but so much more convenient to have a little ticket office in the corridor instead.

Further around corners, and dead-ends. Sometimes with moderns doors offering staff access to platforms, but sometimes totally bricked up and sealed off. One of the curiosities of writing this blog is the number of people who “know” that there are secret doors and passageways in old tunnels where I have stood facing bricked up walls and dead ends. I nod quietly and wonder why people make up this rubbish. 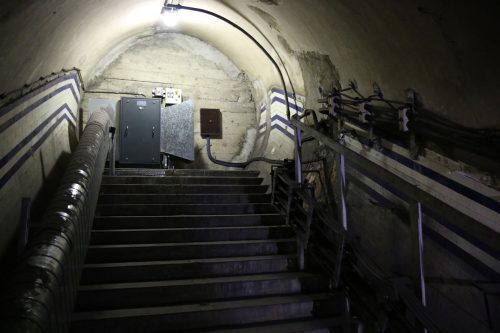 Maybe opening up some of the tunnels to public tours as is now becoming possible will dispel some of this more bizarre conspiracy theories.

But in the tour, a chance also to stand at the bottom of the old lift shaft, then on to something modern. 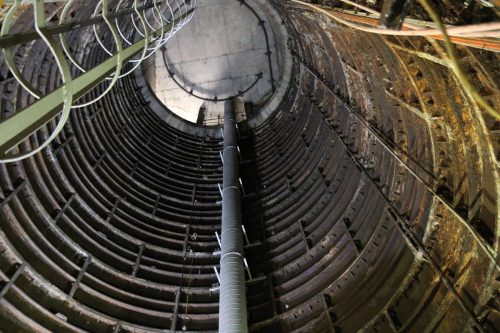 When building the Victoria Line, knowing that the old lift shaft would be ideal for ventilation, they had to dig more tunnels to take the air to the Northern line platforms.

Modern, massive tunnels are unfinished and dimly lit. A steep slope to walk up without any steps and a curved wall in the middle of one section that eluded much mystery, but was in fact, just a curved wall. 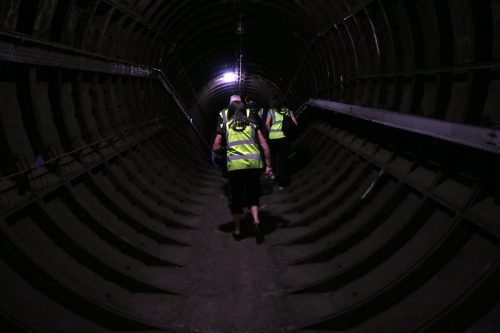 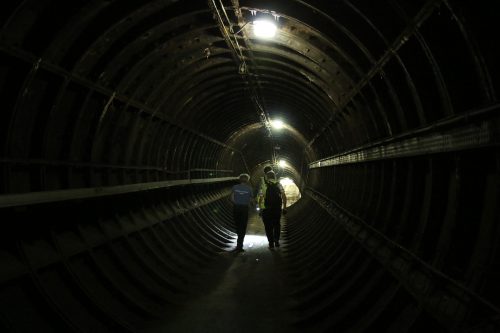 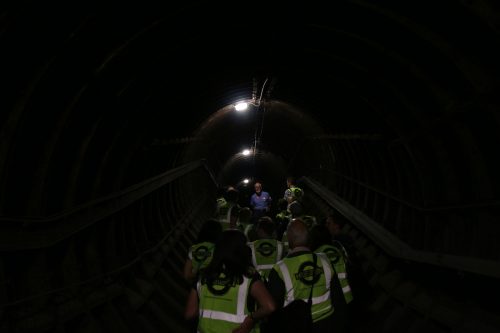 At the end, deep recesses and looking down, through the grill, could be seen normality. People waiting on platforms for trains unaware that just above them, hidden eyes were looking down, unseen behind grills in the gloom.

Trains pulled in, and the purpose of the tunnel became clear as blasts of cold air washed around before being sucked away again as the red-and-white metal tubes below sucked away the passengers.

Empty platforms, nothing to look at, and the tour was over.

A return from the past to the present, from the eerie empty spaces punctuated by the dull distant rumble of trains passing through tunnels that could be felt to bright lights and the roar of trains entering stations.

From a curiously peaceful space to the hubbub of London.

Just 40 minutes in the tunnels, but an aeon of experience. 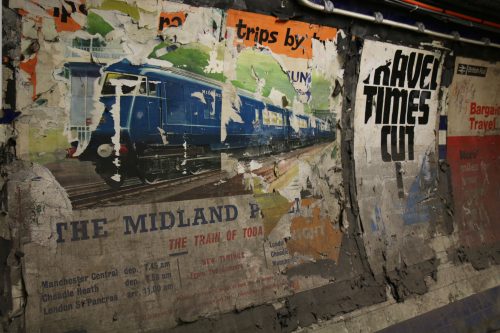 Tours of Euston are now sold out, but they should be available again, probably next year. The museum still has tickets to visit Down Street and the Clapham South WW2 shelters.