Photos of the Crossrail Station at Paddington

One of the curious things about huge construction projects, is that for all the disruption they cause to some people, it is quite possible for others to have no idea anything is going on.

King’s Cross managed to erect a massive new concourse, with many passengers using platforms 1-8 being totally unaware of it until it opened.

Likewise, the hundreds of thousands of people who use Paddington Station each week, rushing between tube and train could be equally unaware that a vast construction site sits right next to the main station — for this is where a future Crossrail station is being built. 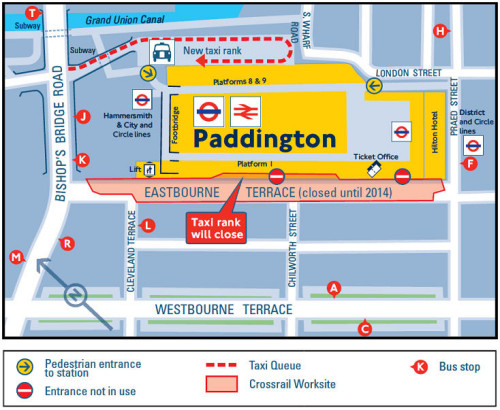 If you are rich enough to use taxis, then you’d have noticed, because the new Crossrail station sits where the taxi rank used to be, and it had to be moved.

So, just outside the station, and running parallel to the main platforms, but noticeably deeper, will eventually be two new platforms, for Crossrail. 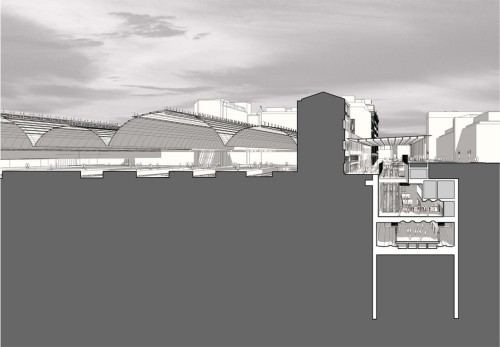 The building site that they have taken over is, as mentioned the old taxi-rank, and the road that ran along side it — so a very long, but quite narrow site to work on, and in places as it turned out, too narrow for the station to fit into.

In essence, the station will be a big long rectangle in the ground, with escalators down to the ticket hall, then another lower floor for the trains.

There are two ways of building a long rectangular hole in the ground.

Both need a concrete wall to be driven down into the ground to form the edges of the box, then you can either dig out the box and prop up the sides as you go down, or the other method, chosen here is to put the lid on first, then dig underneath that and lay each floor as you dig down. Underdigging.

The choice of under digging here would have been partially driven by the need to return the road next to the site back to its users (and bus routes) by next February. By laying the ground floor slab first, they can shift their work equipment onto that and release the road space back to its more conventional users.

At the moment, they have started under digging the first level, which is being used at either end of the box for an intermediate floor for the staff and services. In total about 40% of the station interior will be given over to staff-only areas.

Another reason for having the extra floors at the ends is that the surrounding wall here is slightly weaker in design due to the need to have a Tunnel Boring Machine run through the site, and they generally don’t like running into metre thick walls of reinforced steel concrete, so gaps are left in the wall, and some extra floors help stabilise the sides.

The TBMs was passing through the station as the side walls were being driven down, so deep underneath the site today are two train tunnels. Once they dig down deep enough from above, those tunnels will be exposed, and removed — and the station platforms installed next to them.

That’s the same technique as is being used at Bond Street and Tottenham Court Road — dig the tunnels first, then construct the station around them.

Remember that the building site is a bit too narrow? The foundation bricks underneath the outside wall of Paddington station spread out as they get deeper — from 400mm at the top to 1500mm at the base. These have been thined down, and a new concrete wall underpins the building now — which is much narrower, and releases the extra width needed for the station building.

One of the other innovations in the design of the station is that it wont have any buildings above it. Stations elsewhere tend to have offices and shops above them — but here, there is nothing, so they have taken advantage of that in the design.

The final roof will be glass (with clouds painted on) and and you may be able to see from the cross section below, the two main rows of escalators down to the ticket hall in the centre of the station form a deep V-shaped hole — which will have a glass roof.

So you will be in effect descending not down into an underground box, but into a sunlit valley. 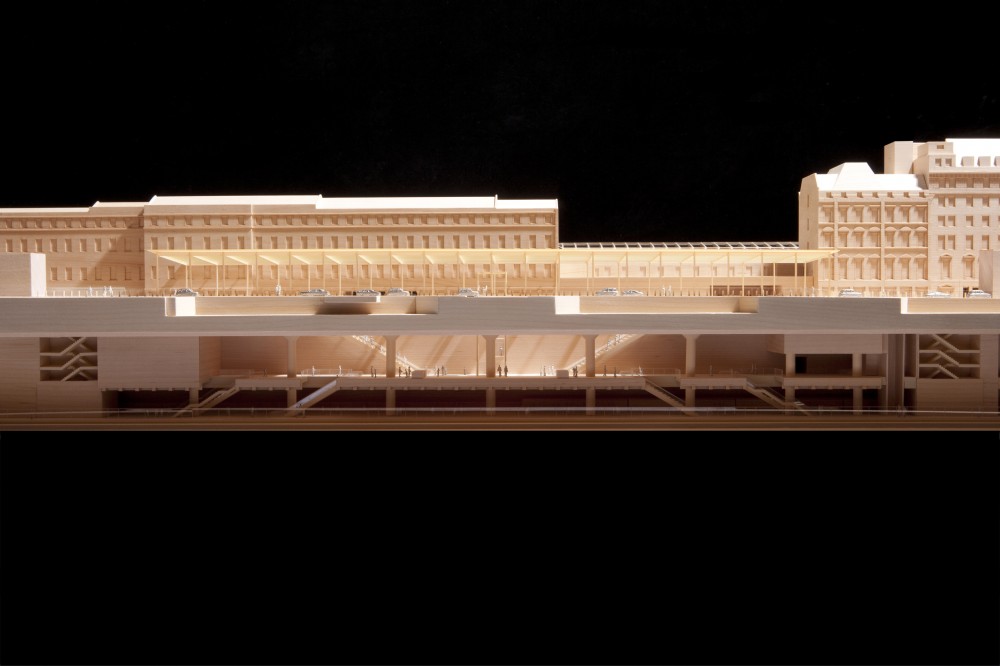 Although the station’s main entry points will be at the surface, for both mainline station and locals, there are plans to drive a tunnel from the ticket hall level underneath the main station to the Bakerloo Line. Approved in principle, there seems to be a bit of haggling over the details. 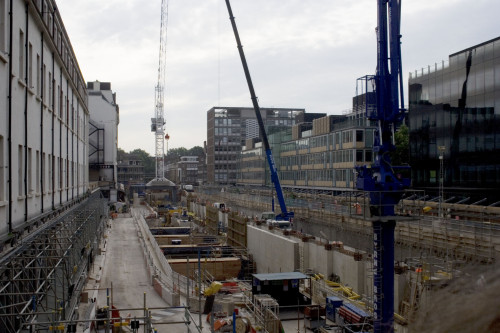 Incidentally, the Crossrail tracks approach Paddington on the north side, but the new station is to the south — so the new tunnels that start just outside Paddington dive under the other railway lines to get to the correct side of the station.

At the moment, the station status is that the ground floor slab has been poured, and they have started the under digging process, while some surface works are being erected.

A third crane will arrive shortly, mainly so that deliveries at one end of the narrow building site can be carried down to the southern end.

The tunnel linings should be exposed around this time next year — which should be an interesting sight to see.

If you have a chance to wander past the building site before next February do so — there are some very interesting historical photos on the walls.

The site visit was part of the weekend’s Open Doors event, courtesy of Skanska. 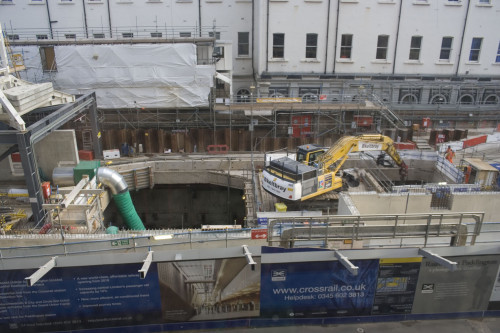 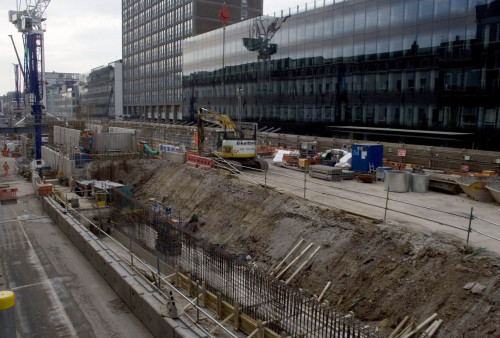 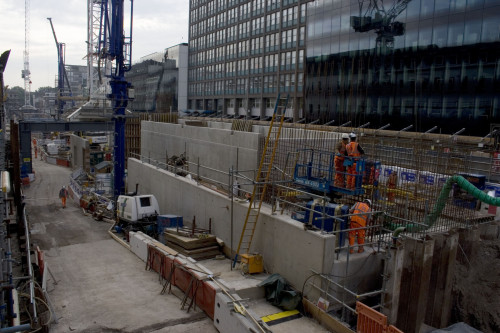 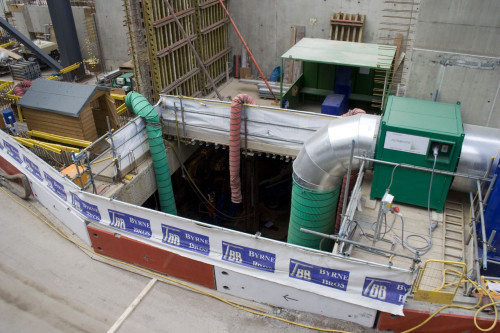 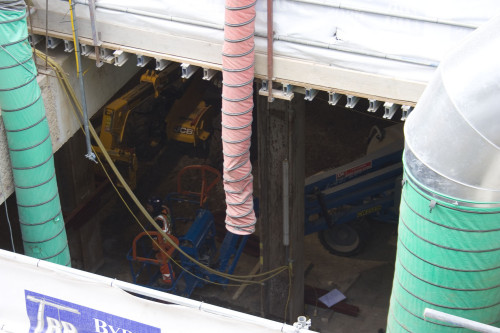 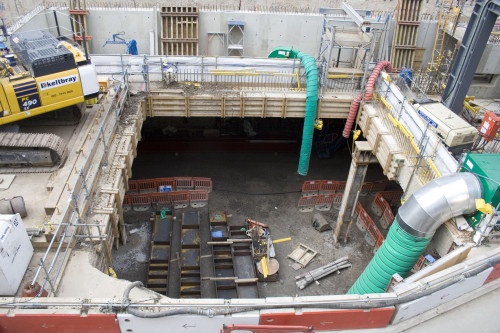 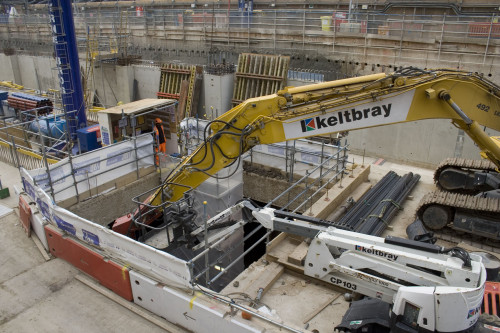 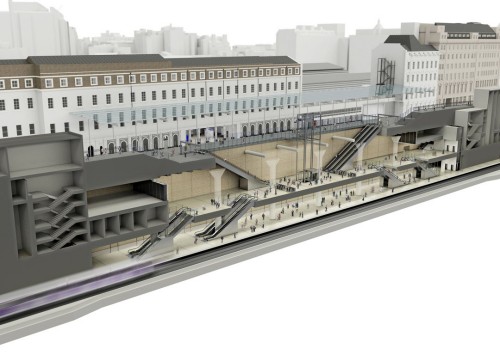