Photos – Inside the Crossrail station at Bond Street

When constructing a train station on the edges of a city, you may be blessed by large amounts of open space to work with – such as the huge Crossrail station built inside an old Victorian dock at Canary Wharf.

But building a station in the centre of town is rather more problematic — such as the Crossrail station at Bond Street. Not only do they have very limited space to work in, but all their deliveries have to cope with the local offices and homes…. and there is a complex tube station sitting right next to the building site.

In order to build a large underground station, they have taken over two plots of land and are digging down, then sideways to create a warren of tunnels underneath Bond Street. Yesterday was a chance to have a look.

What is essentially being constructed are two new station entrances at either end of the future Crossrail platforms, with the Western End bolting onto the existing tube station, which itself is getting an upgrade to cope with the extra passengers.

The 3D image below, courtesy of Crossrail shows the site in detail, and the lower-right box is the Eastern entrance, with the upper-left box being another exit and the route to the Jubilee and Central Lines. 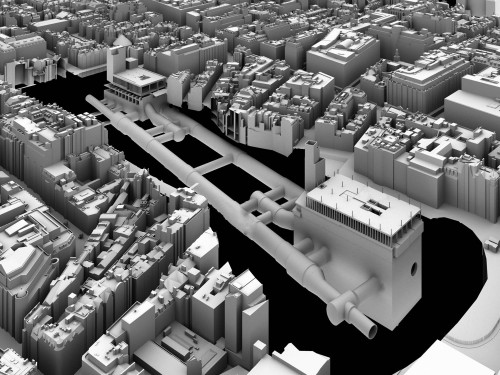 Although essentially the same railway station, the two boxes are being constructed in somewhat different ways.

Starting with the Eastern ticket hall – once the previous occupant had been demolished, piles were driven around 50 metres down into the ground around the site to create a “diaphragm wall”, and then due to the nature of the location, they had to install a couple more temporary walls within the site to support the sides as they dig down.

Three shafts were dug down, and then the soil was removed around each floor, leaving a visually distinctive profile. This is all temporary though – eventually, all of it will be cut away to reveal a large empty box, into which the station will be fitted. 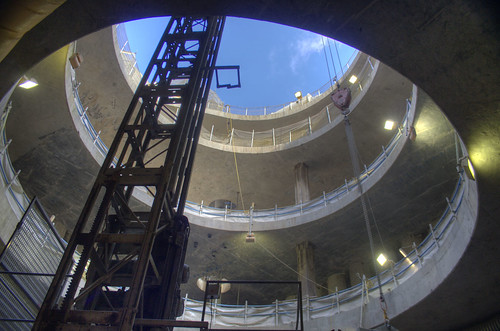 The intention as you can probably see from the above 3D layout is that the station box will take passengers down to a central corridor, and then they take short side passages to the platform tunnels.

While the main tunnel is being dug by a nice big machine, the side passages are still dug by hand. Well, by conventional digging machines used by humans. Then the tunnels are spray lined with concrete to stop them from falling down.

And that is what is going on right now.

In fact, if you count from the bottom on that 3D drawing above, it is the 3rd from bottom side tunnel that is being completed right now. And this is what it looks like. 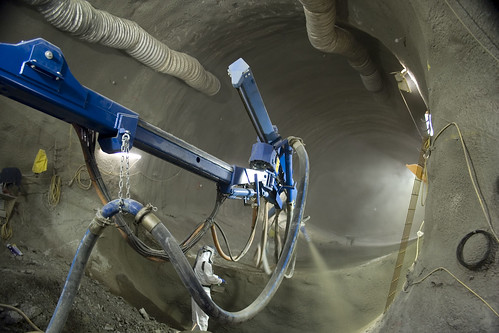 The large arm is remotely controlled by the man in the protective white overalls, while another chap stood behind controlling the machine back end. Other people handle the deliveries of concrete that come down in containers from the surface by crane.

Concrete is not a particularly pleasant material to get onto your skin, so they have to wear all-body overalls, and a special headpiece with its own air filtration supply to stop them from breathing in the concrete dust.

We were off to one side and still had to have dust masks and the usual paraphernalia of subterranean building site visits. Emergency rebreather gas masks are on a wall behind, just in case of a gas leak, or similar oxygen sucking event. 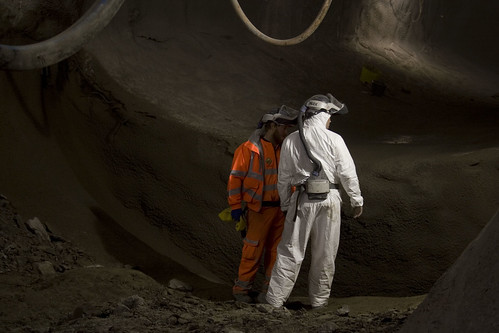 Despite the cold wind chilling the bones at the surface, it was almost uncomfortably warm down below with all the machinery blasting out hot air and the concrete dust around.

These side tunnels have to be done by hand though. Machines will probably never replace humans in these tasks, if only because geology is so inconsistent.

Most of the staff doing the spray concrete work are trained in Ilford, where Crossrail have built a tunnel training academy, and where your correspondent got to play with the remote concrete spraying arm last year.

It’s not just a case of spray and go though – you do need to be quite careful to spray enough to stop the tunnel collapsing, but not so much that the concrete takes too long to set and become strong. 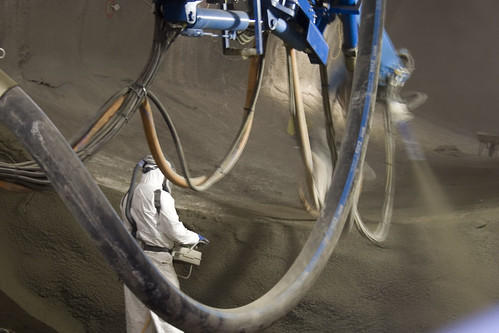 The Western Ticket hall is a totally different site, and actually, in places not that dissimilar to how the lower half of the Canary Wharf station was built. On a much smaller scale though.

Again, once the previous incumbent was removed from the site, they put a diaphragm wall all around the edges to form the outer wall, within which the station will be dug out.

Here, they are using an underdigging technique, which works really well, even if it means it looks from the outside as if a building site has absolutely nothing going on. Everything is hidden underground. 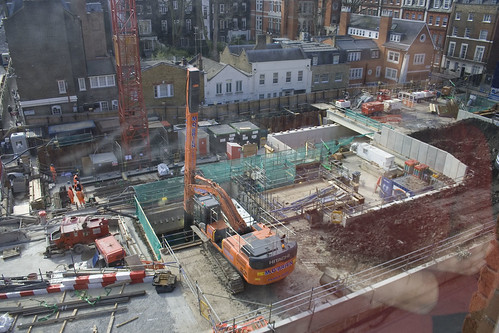 First, a ground floor concrete slab was laid on the site and piles were driven down into the ground to form what will later be the pillars holding up the floors below.

Now, they dig down underneath the concrete slab, which is held up by those piles.

Down one floor, and thin concrete skin is laid, and on top of that – a much thicker floor slab, typically 75cm thick is formed on top. Now dig down again underneath that floor to reveal the next level down. Hack off the thin concrete skin, and you are left with nice clean roof above your head. They repeat as often as needed. In this case five times. 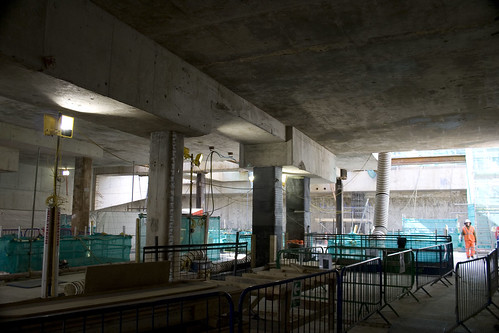 At the moment, they are at level -2, and as of yesterday were preparing the lay the main concrete floor at one end, while still digging out the London clay at the other. This floor will be structurally sound by the end of the month, which is when they start digging down to level -3. 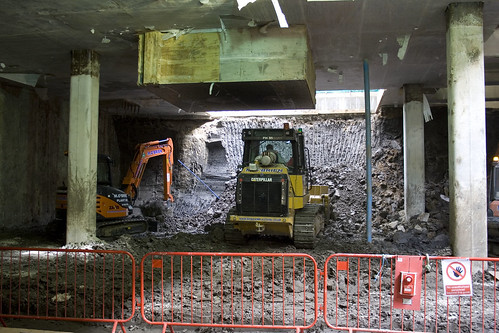 The whole operation should be completed by around October time – which is when the spray concrete workers from the other ticket hall can come over and start hand digging their side tunnels.

A useful side drawing of the Western ticket hall is below- courtesy of Crossrail. The two circles underneath the station box are the Jubilee Line tunnels, and the two semi-circular portals at the bottom of the Crossrail escalators are the side passages leading to the platforms.

Once the stations are completed, they will be built above ground to the first floor, then developers will put offices on top afterwards. A large ventilation shaft is also being provided at one end.

In the next couple of weeks, the first of the Tunnel Boring Machines that set off from the Royal Oak portal last year will arrive at Bond Street, and drill straight past it.

Once the TBMs have passed, they will leave a train tunnel sized tube behind, which will then be dug out again manually to enlarge it to the correct size for the platforms as well. It’s more work to do it this way than build the larger tunnel first, but a lot less risky. If problems with the platform tunnels occurs, then it delays the TBMs, and that is a bigger problem.

The TBM will stop for a very short rest at the Eastern ticket hall though where a void in the ground is being dug ahead of it so that maintenance engineers can take a look at the cutting head and carry out any repairs.

Building the train tunnel before the platforms also means, rather usefully, that the muck from the platform tunnel widening can be carried away down the new train tunnel, rather than by trucks on the road.

A total of 1.2 kilometres of passenger, service and platform tunnels are being mined here at Bond Street. These are in addition to the train tunnels that will pass through this station.

Oh, you may remember that the waste soil is being taken to build a nature reserve in the Thames estuary. I rather liked this sign on the building site asking them to keep the mud nice and clean for the birds.

Access to the two building sites was thanks to Crossrail and the contractors. 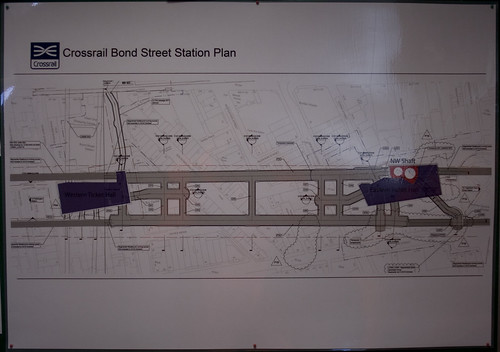 More photos from the visit are available over here.