Photos from the tunnels under Reigate

Published 15 May 2016 by Day trips from London, Surrey

Nearly 1000 years ago, a Norman baron dug a tunnel under a castle to improve his security, and for the next 800 years, the local residents did much the same thing under their back gardens, for their prosperity.

The castle, which no longer exists was in Reigate, but many of the tunnels still remain and on a few days of the year, some of them are open to the public.

Although commonly known as Reigate Caves, technically speaking, caves are made by the effect of nature, while man made diggings are known as mines, so these are the Reigate Mines.

On the open days, there are three to visit.

The oldest is the Barons’ Cave 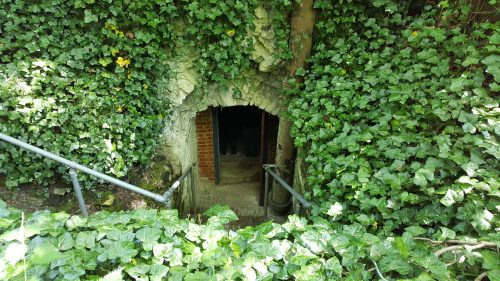 Following the Norman Invasion, William de Warenne was made Earl of Surrey and his son built a wooden castle on the hill at Reigate, which was later replaced with a stone version, as presumably the subdued Brits were not as subdued as had been hoped for.

Part of the defenses included a tunnel, dug out of the hill. Digging escape tunnels out of castles is a fairly rare thing to do, but here at least it was made possible due to the hill being made largely from sand, which was exceptionally easy to dig through. 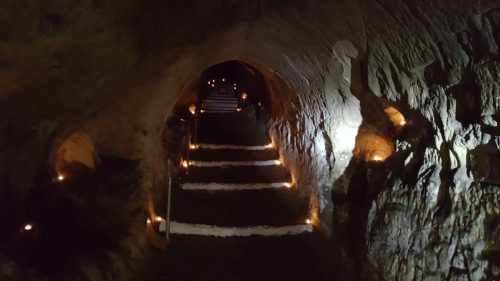 Beyond the sign warning of falling stones, is a stone lined corridor leading up to the castle — which today is marked on the surface by a stone pyramid, but the rest of the tunnel is carved from the sand — soft enough to carve, but just strong enough to stay stable without further support.

One of the mysteries of the tunnel though is deeper down, and off to one side — a massive long chamber. Quite what it was for is a mystery, with plenty of theories to pick from, each of equally dubious historical legitimacy. 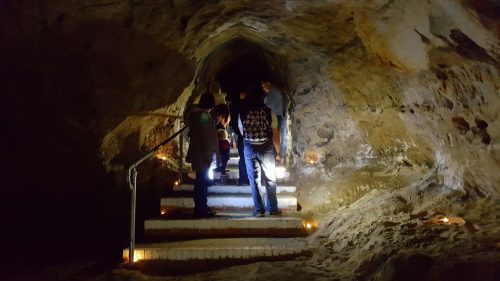 The tour guide did demonstrate though one tale which at least seems to work. The bell to summon people. Legend has it that a stone ball was used to summon people — presumably servants — from the castle down to the Baron in the subterranean chamber.

As a test, the chamber was once filled with girl scouts screaming, and no one on the surface could hear them — but a bowling ball sized stone thrown at the floor sent a deep rumble throughout the tunnels, which was clearly audible at the surface. A dull rumbling that was demonstrated this morning. 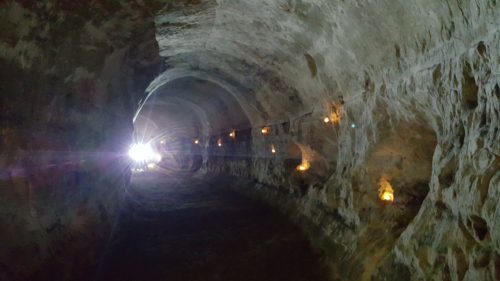 Another side chamber, more modern having been dug out during Victorian times now also houses a plastic dinosaur — apparently a prop from Dr Who. 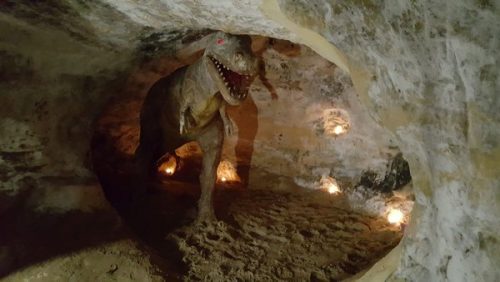 The road tunnel is actually open all the time, but it houses the entrances to the other two caves, and is worth mentioning in its own right. 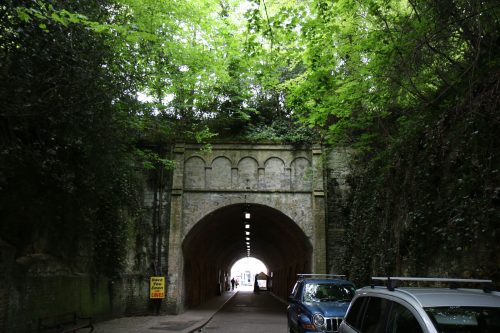 Quite short, it is however the oldest road tunnel in Britain (possibly in Europe), and while allegedly built for traffic, it was a tourist attraction in its own right in the early years.

I say allegedly built for traffic, the claim that it was to avoid a detour around the castle seems wrong. The detour is but a few minutes, and I cannot imagine the saving in time of a minute or two per journey would come close to covering the cost of constructing the tunnel.

A query about taking photos was responded with a note that it’s allowed, except where there are signs saying not to take photos, as part of the caves are used by a riffle association.

And indeed, down here in the cool sandy interior is a large riffle club — originally a cycle club, around a 100 years ago, they drops bikes for guns and never went back.

Amusingly, while being in a tunnel carved from sand, they have to have sand delivered to the riffle club. It seems that sand used behind the targets to absorb bullets has to be of a certain grade, and that has to be imported from elsewhere. So every few months, fresh sand is delivered to a town built on sand.

Down here is also a modern section as the tunnels were used as air raid shelters during WW2, and in some corridors evidence of bunk beds long since removed can be seen, as is a brick wall with a handrail on its own 2 stories above our heads — the last remnant of a long since vanished staircase.

I was starting to despair of taking any photos, as every single tunnel had a no photography sign in it.

Now though, we were deep within the tunnel complex, and back here is a very modern tunnel. Following subsidence, the local council decided to fill in some of the tunnels to prevent further damage to the surface, and needed to dig their own new tunnel to get to some of the locations.

A small narrow, very fun tunnel to walk through, although using it regularly for work must have been very unpleasant. 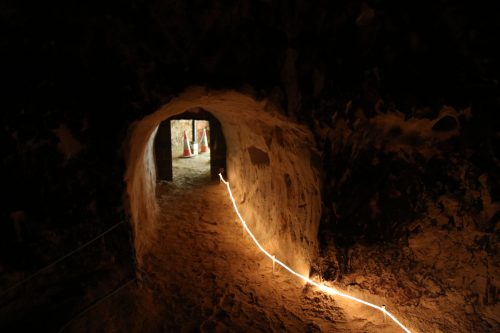 But finally, I was in a section that permitted photos, and was much more atmospheric, being for visitors rather than gun owners. The main reason why the tunnels exist here at all though is that while sand is hardly a difficult thing to acquire — the sand under Reigate is unusually pure with few minerals that can cause discolouring when heated. Reigate sand made the best clear glass in the UK and was highly prized for its purity. 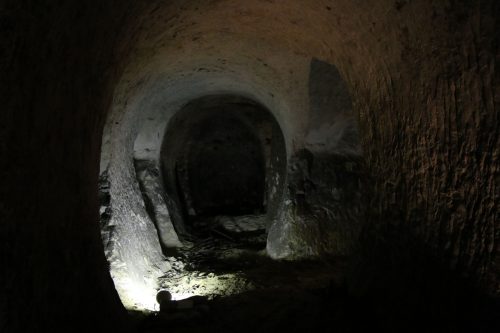 While the caves we were standing in were of a more commercial scale, people had been digging out bags of sand to sell ad-hock to travellers heading to London for many centuries. And on occasion, several neighbours digging away caused their houses to vanish into the spaces below.

The Victorian invention of the steam powered “jcb” enabled the industry to move to open-cast mining rather than tunneling, and the Reigate market dried up, much to the relief of the local council which had to deal with sudden subsidence problems every so often. 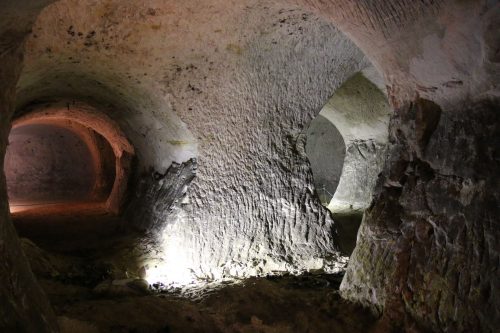 Down in the caves though, mighty pillars of sand still hold up the ceiling, with the occasional brick support thrown in where needed. 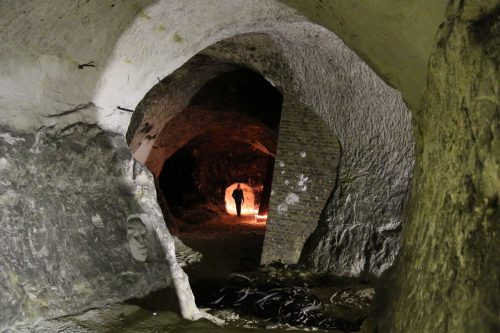 Ancient graffiti still marks the walls, varying from the “i woz ere” variety through to quite ornate decoration.

Sadly, the sandy tunnels were much larger, but for understandable reasons, much was filled in a long time ago. In fact, we walked around the edges of the tunnel complex as the middle was filled in by an accident. Around 150 years ago, what was a cricket pitch on the top of the hill suddenly became a deep depression — as the entire lot dropped down into the caves below, allegedly burying a huge cargo of wine being stored in the caves.

No one has ever excavated it since. 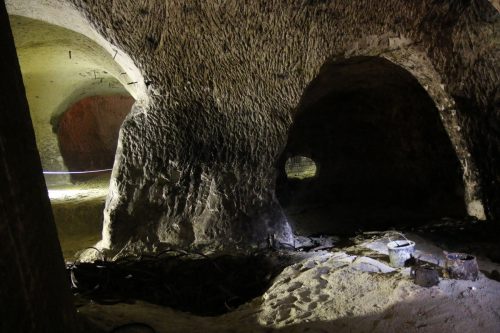 The other tunnel caves

On the opposite side of the road is another tunnel complex, this time laid out more as a museum of the local area, and also showing how the tunnels were used during WW2 and the Cold War by the local government as a headquarters.

Amusingly, having just been into two rough cut unfinished tunnels, these more family friendly tunnels require the wearing of a hard hat to go inside. Absolutely bonkers. 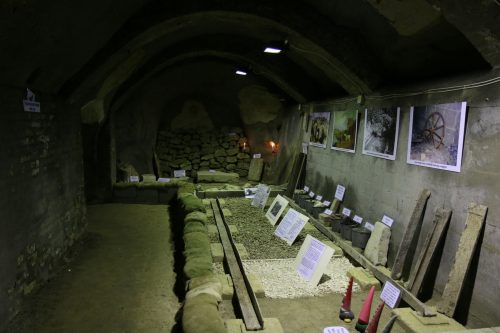 Originally the tunnels were used for storage by local beer and wine merchants, but during WW2 they became a mix of air raid shelter and command centre for the local council. So down here is an odd mix of old industry and modern warfare.

Do read the sign on the apparently ordinary dining table, as it may surprise you. 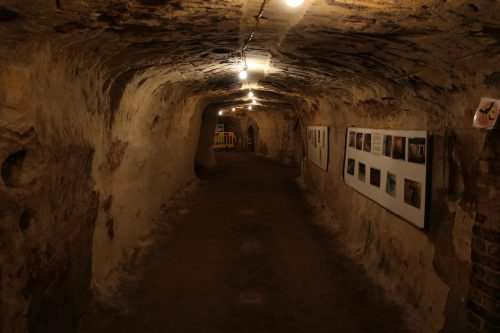 A room shows off how the local police would have had a base down here, and another looks at the precautions taken to survive a much deadlier, nuclear attack. 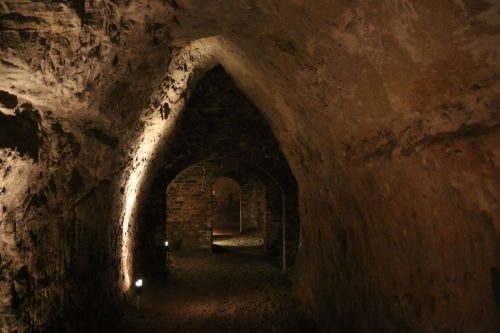 Apart from the artifacts though, these tunnels are a wonderfully atmospheric mix of sandstone carving and brick supports which look like good and proper tunnels, without the dampness that permeates the natural versions. 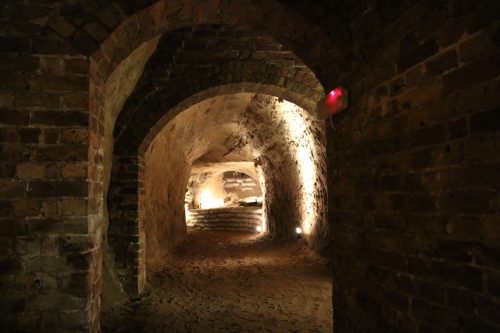 The Reigate Caves are open on the following dates, and tours of the Barons’ Cave and the main tunnel caves take place every 15 minutes. The museum caves are open to just wander around.

Cost for all three tunnel sites is £4.50. All told allow maybe three hours for the three sites.

The tour guides are all members of the the Wealden Cave & Mine Society.