Photos from the deep excavations under Victoria Street

If you were to descend deep down underneath Victoria Street in central London — some five floors down — you might be met by a metal leviathan clawing away in the darkness. 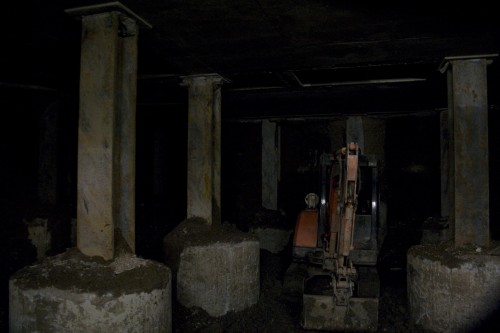 This is in fact one of a number of machines digging down a full five storeys to carve out more space under London for a couple of tower blocks above as part of Land Securities revamping of the old government office estate into one more suited to modern commercial tenants.

What was a tedious slab of a building is being replaced by one modest tower block for residential flats, and another — nicknamed the ZigZag Building — that will be for offices. More ground floor space is being created, and as there are two separate buildings, it will finally be possible to walk to the other side without going all the way around.

But, to get the offices above, they need not all that significantly less needs to be built beneath them.

This is actually the bottom 3rd,4th and 5th floors of a giant basement being dug out underneath the new office blocks. 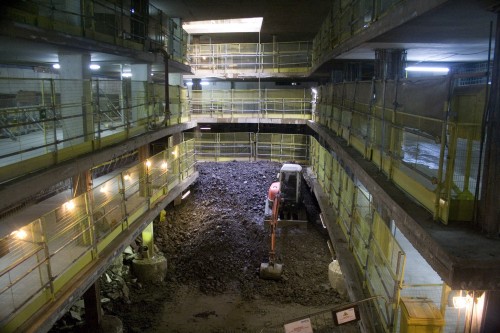 In fact, the block of flats is getting five floors below, mostly for a car park. With even the studio flats selling for a million quid, telling residents they can’t park their car in the building was out of the question!

Having cleared the old site, the main method used here is to underdig the site – going down floor by floor.

First, surround the site with the exterior wall — in this case piles driven into the ground and filled with concrete. Drill down in the middle of the site for the supporting piles.

Then, clear the soil and make it fairly flat. Pour a few inches of concrete and create a very flat surface. Then lay a thin layer, sometimes of plastic, sometimes of wood. Upon that make up the steelworks and pour the concrete to form the main slab.

Once set, start digging away underneath the slab. The thin skin falls away to reveal the flat base of the main concrete slab, and you keep digging down until you reach the base of the next level. Then repeat, as often as necessary.

The huge advantage of this method is that the ground floor slab is in place above the heads of the workers, so that as they dig down, it is possible to build upwards as well. 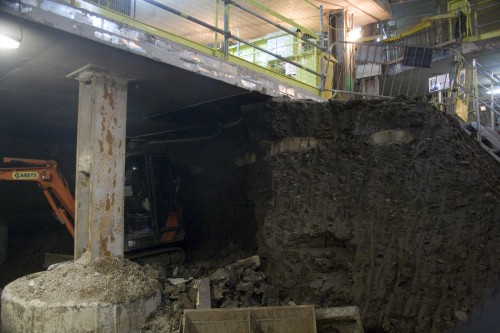 A site of this depth is going to punch through several layers of soil, and as Victoria is built on formerly exceptionally wet lands, the upper layers of the soil were unsurprisingly very wet. In fact, they detected the water levels moving in time with the tides in the Thames, even though it’s about a mile away.

What surprised me though was that it isn’t that far down before you reach lovely London clay. If you are a tube tunnel builder, London Clay is lovely. It is so solid and stable that you can tunnel through it and leave the walls unsupported for quite some time before having to put in the supporting rings. Indeed, it is probably the fact that early tube tunnels could dig through lovely London Clay instead of sandy sediments that enabled the early tubes to be a success.

Thanks to the solidity of the clay, the surrounding diaphragm wall didn’t need to be solid at this depth, and you can see the clay standing up quite solidly between the concrete piles without any need for support. 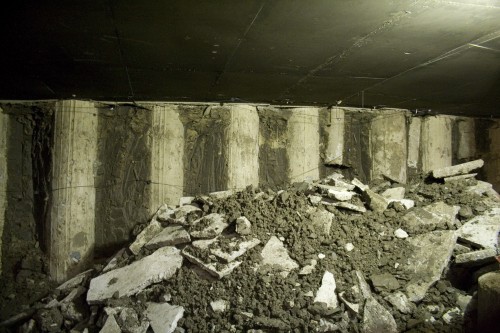 There is something curiously impressive about standing 5 floors below ground and being able to walk up to a solid wall of clay and touch mud that was lain down around 50 million years ago.

London was probably a tropical forest at the time.

Back to modern times, and further up, finishing work is underway. A padded plastic skin is being inserted between the outer and inner walls. If, or maybe when, the outer wall starts to leak, the plastic will stop the water from straining the inner wall, and the padded effect leave drainage channels down to sumps below where the water can be pumped away. 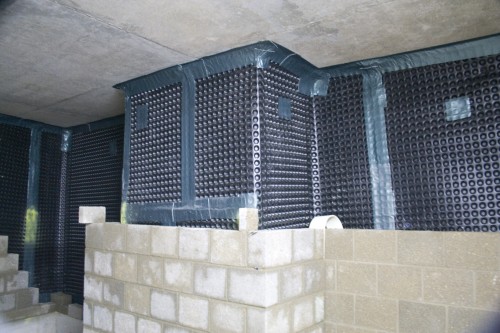 Elsewhere in the basement will sit the unseen side of modern infrastructure. A giant electricity substation. As electricity consumption in the area is rising with all these new office blocks, UK Power Networks need somewhere to put a new substation to cope.

As most of the demand is because of Land Securities upgrades, it is convenient that the substation could be sited underneath one of their office blocks.

It is also down here that a regulatory curiosity exists. In a realm of concrete, sits a large room made from brick. It’s a requirement that substations are built from brick to certain tolerances, so, deep under London in a concrete box, is a brick room.

Because that’s what the rules say.

The building next door has four floors of basement, one for the retail stores, and the rest for the plant room and machinery that makes modern office buildings work.

Interestingly, they are trying out a new cooling system for the building, for which the chillers will be down here as well. Rather than conventional air conditioning blowing cooled air around a building, they intend to cool the building itself.

Concrete absorbs heat. In fact, if you shut London down completely, it would still be hotter than the countryside, because the buildings absorb solar radiation and store it. So, the technique here is to use a type of underfloor heating, but for cooling, and to directly cool the building structure.

That should avoid all the ceiling ducting that modern air conditioning systems need, which is good for building maintenance — and avoid cold drafts for the office users.

Quite an interesting idea.

But the most amazing thing is yet to come.

Most buildings can be deemed to be a solid structure from the bottom to the very top — all one unit. But this one isn’t. In fact, the building from the surface upwards is not connected to the basement at all.

The top of the building sits on giant rubber laminate bearings that are designed to act as shock-absorbers.

As is very evident if you go down into the basement, it sits right next to the Circle/District Line tunnels. At its closest point they are just 2 meters apart, and the deep growling rumble of the trains passing by was felt every few minutes.

Cars and machines in the basement don’t care about that, but the people above will.

So, the entire building sits on rows of big blocks of rubber. In fact, they are bespoke designed, and made up of layers of metal and rubber. Actually, they didn’t arrive until after the building was being constructed, so how do you slide something into a gap between two giant buildings.

They are jacking the building up!

Yes, the blue boxes you can see here are replicated though out the building, and are pushing the entire structure up by some 12mm, so that the black rubber boxes can be installed. 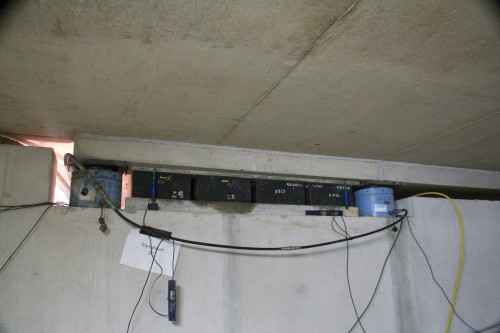 I am not sure how to express how impressed I was with that — but an  entire building is sitting on little blue hydraulic jacks pushing it up. Gazillions of tons of concrete and steel being slowly pushed upwards.

In the long term, the building will be lowered back down again and will come to rest on a thick rim of rubber, and hopefully the coffees sitting on tables above will never know a tube train just rumbled past. 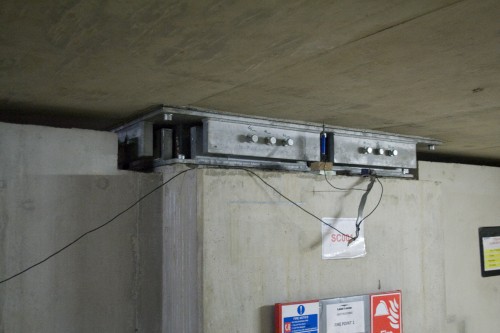 Thanks to the project manager at Land Securities for taking time to show a small group of people around. The visit was organised by Sub Brit, who regularly organise tours of underground places. 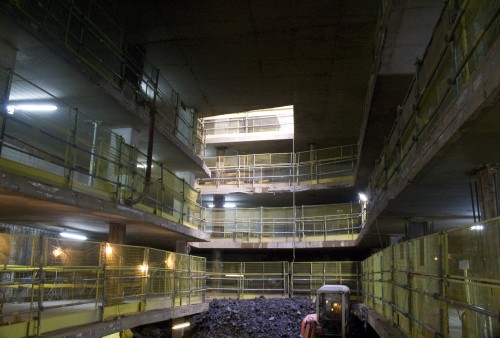