Photos from the Crossrail tunnels under Farringdon

Of all the stations being built by Crossrail, one of the most complex is at Farringdon, and all thanks to an event in the North Sea roughly 10 million years ago.

Although London’s underground geology is famously ideal for tunneling through, there are pockets of resistance that can thwart a tunnelers goals. And a major problem exists at Farringdon. Where original plans had tunnel boring machines, as at most of the tube stations passing right through London clay unimpeded, here there plans had to be changed.

What caused the problem is that the London Clay that is so ideal for tunneling doesn’t descend deep enough for Crossrail, leading them into much softer sands which are not an ideal tunneling material. But more critically, the area is crossed with geological fault lines.

Five of them in fact, and it’s all because of the North Sea. 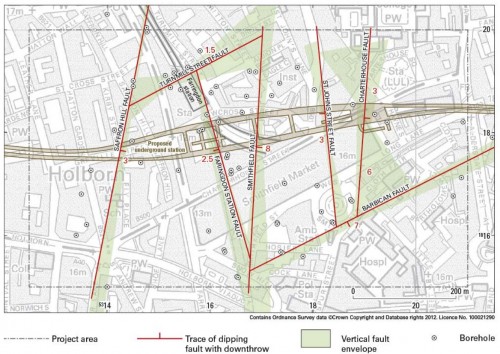 Via: Benefits of a 3D geological model for major tunnelling works

The side-effects of the opening of the North Sea Basin around 10-20 million years ago, which was caused by northwards movement of African tectonic plates is thought to be the reason for the fault-lines which cross the area.

London has other faults, notably the Wimbledon-Woolwich line, but the cluster of small faults and different soil layers at Farringdon just happened to be right in the middle of Crossrail’s route.

Because of the complexity of the soil, a lot of preparation work was needed to make the ground stable enough for a tunnel boring machine to avoid getting stuck. It helped that Crossrail had paid a full £10 million for each TBM, preferring to pay a premium and avoid more costly problems that might have occurred.

While the soil is not uniform, another key problem is the presence of “sand lenses” throughout the site caused by the old geological faults. These, filled with loose sand had to be filled with, what was basically a form of super-glue, to help stabilise the soil. 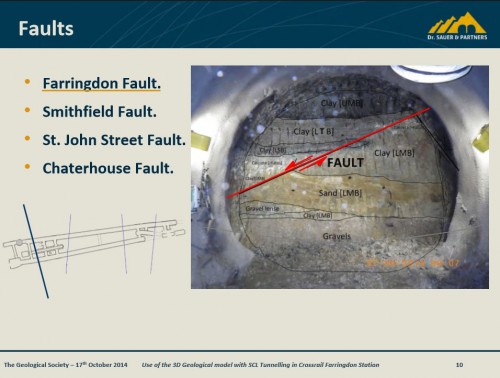 Two of the TBMs were then able to pass through the site and stop just short of the eastern end, where a large hand dug cavern was cut out to await the arrival of the TBMs from the other side of London.

So the tunnels boring machines headed into the centre from east and west, and met at Farringdon.

Above ground, two building sites have been taken over, one by the current Farringdon station, where the main interchange will be built for the Thameslink and Underground lines, while a second ticket hall is being built at the other end of the platforms, close to Barbican.

In fact, the enforced location of the eastern ticket hall next to Smithfield meat market means that this is also the longest station on the Crossrail network, at some 350 metres, compared to the 250 metres average elsewhere.

The eastern ticket hall has been dug down as a box into which plant and ventilation equipment will later be installed, with an office block on top. To get down to the trains, two escalators are needed, one within the station box, then another set to get down to the platforms, using the slopes to absorb some of the long length of the platforms. 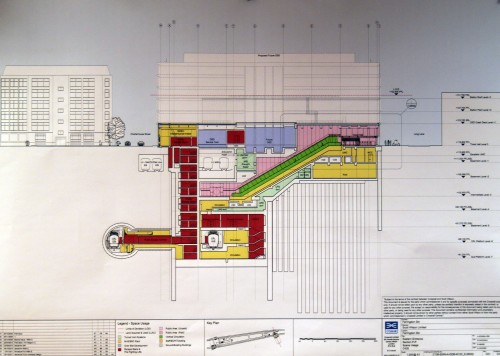 Down here, all is bare concrete, sprayed onto soil and waiting for its main concrete skin to be applied. 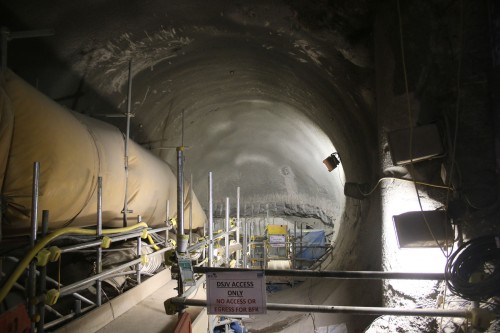 A ventilation tunnel leading down to the platforms.

Before that happens, a large red waterproof membrane is being applied to the walls — here a cross passage between the train tunnels. 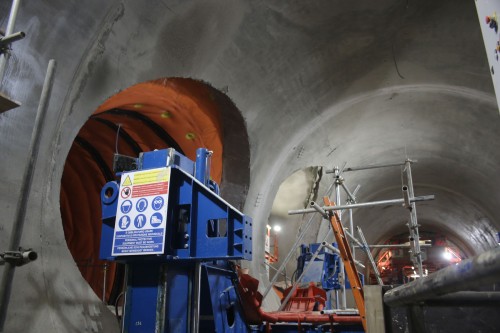 The tunnels for the station were drilled out earlier, and subsequently widened to the width needed for the station platforms. At the moment, two more TBMs which came in from the east are sitting in caverns dug for them next to the station and being dismantled. 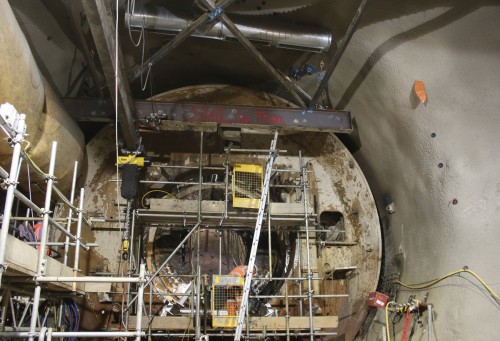 This is what remains of Elizabeth, with the cutting head removed already, and most of of the machine behind dismantled and removed via a shaft in Stepney. What you can see is the main bearing, which is to be removed, and sent back to the manufacturers in Germany for recycling. The huge front “can” that remains was to be left in place, with trains running through them — but that plan has within the past few days changed.

They are about to dig a new shaft down for access, and it happens to lie where the can sits, so its ever so slightly easier to cut up the can, and remove it than to try and work around it. So, people will have the rather unpleasant task of cutting up the huge can into chunks small enough to be removed by cranes.

There was also a concern that running trains and power cables through the can could have set up electromagnetic interference and affect the train signals, so removing the can has other benefits. 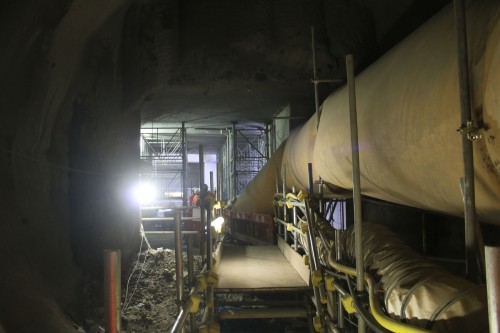 While the TBMs are being cut up, the station is being finished off. A huge mobile gantry within the station tunnel is currently applying the main structural layer of concrete. Over at the western ticket hall, the platforms are being installed, and some of the platform edge facilities already prepared.

When finished, the station will superficially look the same as all the other “tube” stations being built by Crossrail, such as at Bond Street, but behind all that cladding will lay one of the most challenging geological sites faced by the railway. 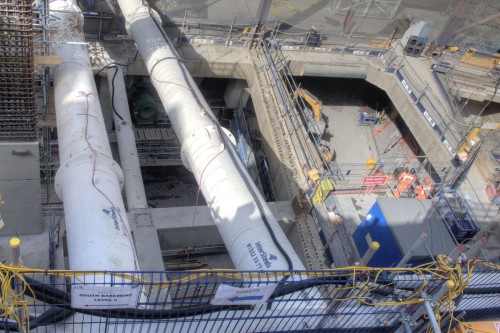 Looking down into the box of the eastern ticket hall 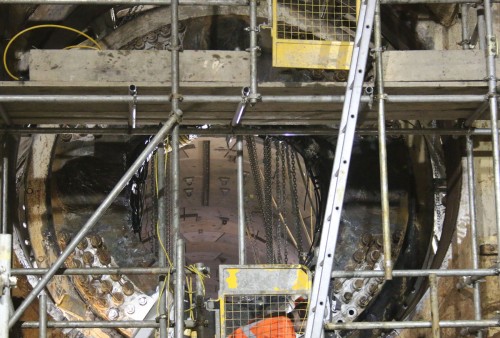 Peering through the dismantled TBM to the finished tunnel behind 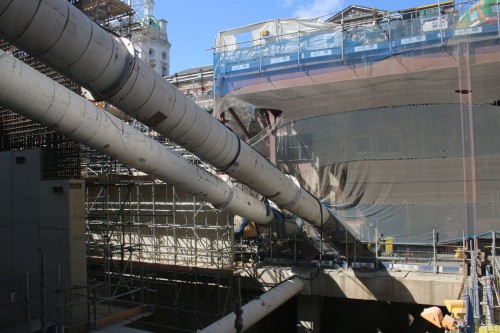 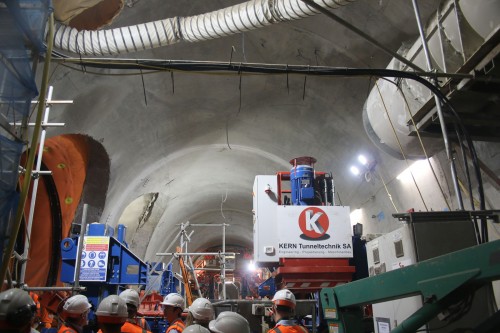 Looking towards the railway platform tunnel 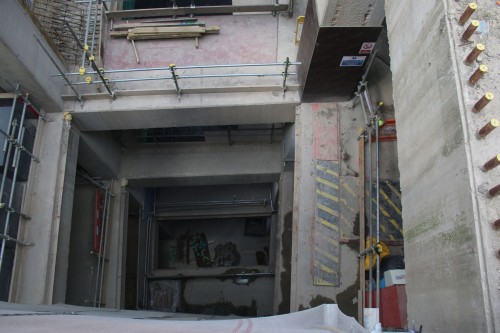 Looking down to the bottom of the ticket hall box 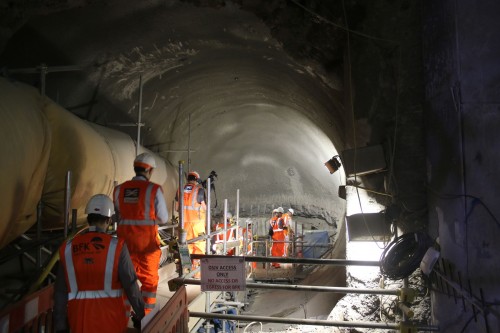 Another view of the ventilation shaft leading down to the platforms 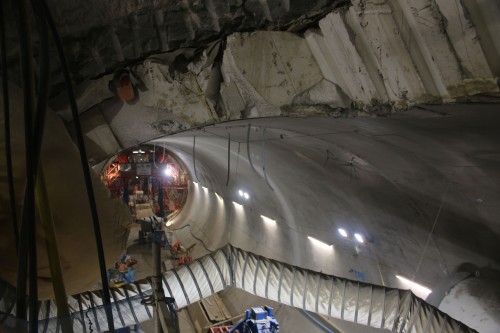 Above the platform tunnel — the clay layer behind the sprayed concrete can be seen here.