The original plans for Crossrail did not include a station here, but a lengthy discussion with Berkley Homes who are redeveloping the Woolwich Arsenal into housing secured a deal. Berkley Homes are building and paying for the construction of the basic box shell, and then it is up to Crossrail to decide if it will fund the fit-out costs to turn an otherwise empty concrete box into a functioning train station.

Obviously, Berkeley Homes wants the station to be fitted out, and is squirrelling away every cost-saving it can find to transfer to the fit-out costs. In fact, the station box cost has already been halved from the initial proposals.

It’s expected that a final decision will be taken before the end of the year, and apparently, everyone wants it to happen, if only they can find the cash to pay for it. 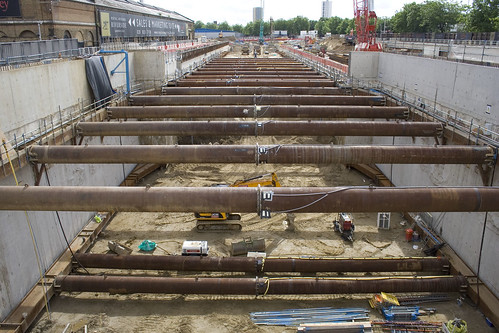 The housing company held an open day for the public on Sunday, and it offered a chance to look around the edges of the building site. As it was for the public, the route we followed was safely set up for us, but what makes people think you can go onto a building site in sandals or with pushchairs?

The site was largely used as a car park before they started digging down and had a public road splitting the site in half. The road has been closed while they dig the station hole, but they plan to rebuild it eventually. The old road junction was designed so that people leaving the estate could only turn left, away from the town centre, so as part of the works they will change that to allow people to turn right as well. Apparently, that will save most motorists about 1km of distance on the one-way road system. 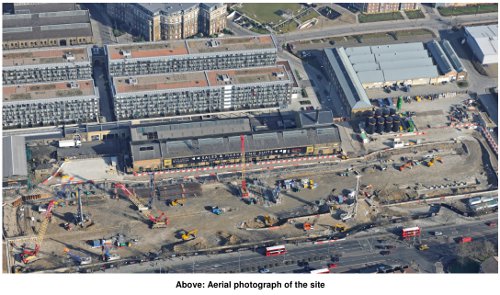 Photo from the Crossrail Newsletter

There are in fact two main construction sites sitting side by side here. The first and deepest of the two is the future train station, which you saw in the photo at the top of this article, with the steel beams holding the walls upright during construction work.

Construction is starting at one end and working slowly along the station box length, so obviously, at this location, the station is nearing completion of primary works, whereas, at the other end, they have barely started digging down.

Not to say they haven’t done any work at the other end as a sewer and services have had to be moved. That required a “mini-crossrail” as a shaft was dug down, and then a small tunnel boring machine lowered down to dig new sewer tunnels. 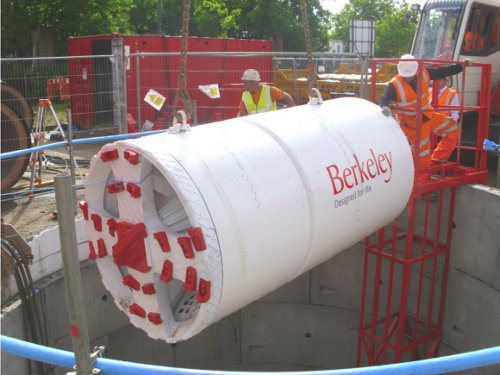 Photo via the Crossrail Newsletter

Actually, that might cause a bit of an issue later as future buildings on top will be restricted by the services below impacting on their foundations.

Other secondary works include installing sheet piling deep into the ground between the building site and some listed buildings to help mitigate any issues with subsidence. When the TBMs arrive at the station, they will head westwards under the Arsenal and another listed building. They doubt they will need compensation grouting as the TBM drills underneath though.

Back to our end of the box, there is another deep excavation taking place next door, which superficially looks the same. It is however smaller, being a two-story deep basement structure for the housing development that they plan to build on top of the station to pay for all this work. 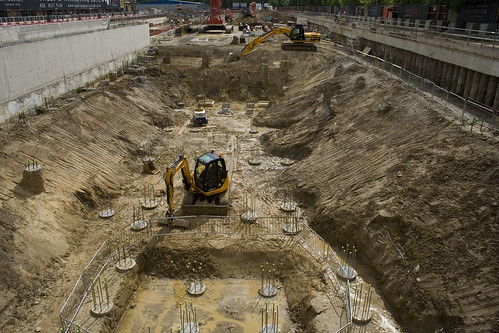 It was also here that they found the most significant archaeological finds – three cannons leftover from when this area was the Royal Arsenal. Three cast iron tubes were disturbed by the impending arrival of two very large concrete tubes.

The tunnel boring machines that will dig the tunnels in this part of London will start a couple of miles further eastwards, at a concrete portal being built at Plumstead. When launched next year it should take a few months to arrive at Woolwich, and will then head under the Thames over towards Silvertown and the Connaught Tunnel.

The Plumstead portal is being constructed next to the existing railway, and future Crossrail trains will link up with the existing lines to Abbey Wood. The concept is very similar to that used at Royal Oak, where TBMs have already started chewing their way to Farringdon. 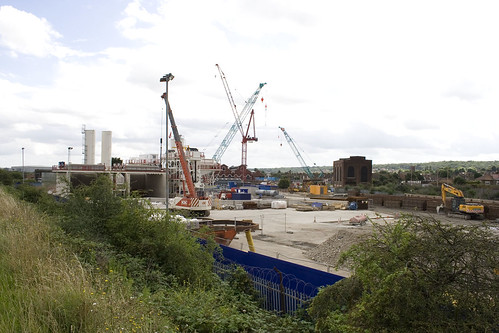 There is a good vantage of point of the preparation site from the nearby Southern Outfall Sewer. The view also included possibly the early construction of the tunnel eyes for the portal wall. Possibly.

Unfortunately, plans to wander around to the other side to see the portal itself were thwarted when the heavens dropped about a years worth of rain on the area. I don’t mind a bit of rain, but that was ridiculous! 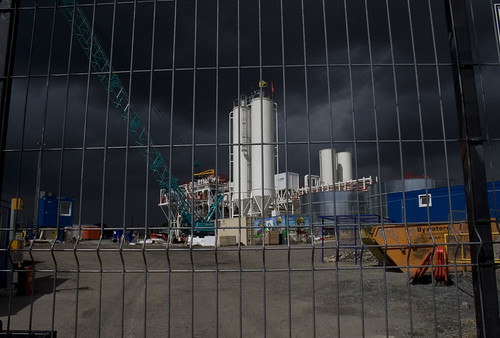 Some more photos taken when it was dry can be found here.