Deep under the centre of London, Crossrail is laying some rather unusual railway tracks that are not often used in the UK. 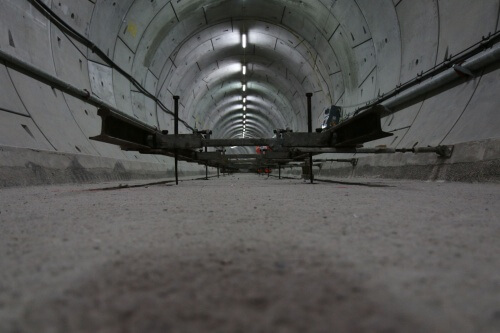 Not entirely in the air, but on a bed of vibration absorbing materials that are being used to deal with two troublesome areas.

Railways cause vibration, and while generally most of Crossrail tunnels are too deep to feel, some parts of London have deep basements — not rich oligarchs — but recording studios in Soho, or the concert halls in the Barbican.

The Barbican isn’t that deep, but the construction method used for the tube tunnels means trains under the Barbican are noisier than today would be allowed, and also meant the occupants were understandably concerned about another railway under them.

The significance of getting this right can be found if you think back to the 1990 football world cup — the recording of Nessun Dorma by Pavarotti was made in London, and it is possible to hear the Piccadilly Line trains rumbling past on it. 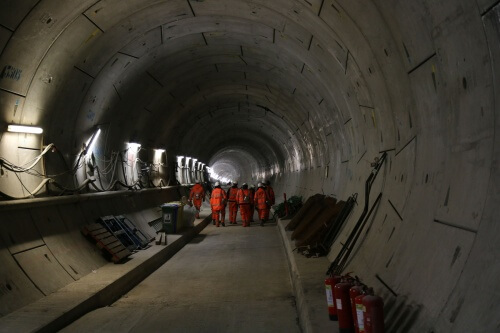 Although around 80% of the Crossrail’s tunnel tracks will be conventional standard track slab, they are using four different types of track slab in special areas.

The Connaught tunnel gets special treatment due to its Victorian construction. In some places, high attenuation sleepers are used — basically, normal track, but a rubber sleeve is wrapped around the sleeper to absorb vibrations.

However, it’s under Soho that what is known as “floating track slab light” is being used.

Due to the extra depth added by the spring base of the floating track, and to improve the vibration absorption, an incredibly dense concrete called Magnadense is used. Magnadense is over twice as dense as normal concrete due to its natural iron ore content.

This adds a further complication though. Each of the 50 metre long slabs of concrete have to be poured in one go, and they are up to 800 metres from the nearest access point, meaning the pipe from the surface lorries to the delivery point is an almost unprecedented distance, and practically at the limit of how far its possible to pump concrete.

Crossrail have carried out tests above ground to make sure its possible to pump this special dense concrete that far. Their suppliers also had to buy specially made pumps just for this job.

In preparation though, the steel reinforcing for the slabs have to be laid — and that is what’s happening at the moment. 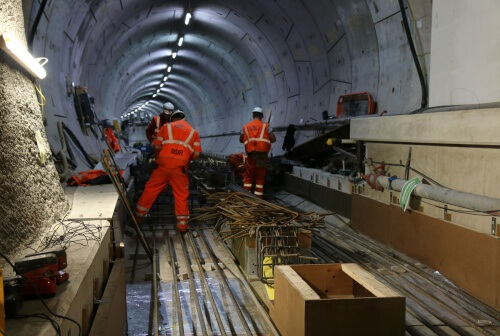 Along the length of where the floating track will run, small metal plates cover the space where the bearings will go. In the middle, large boxes protect space that will become manhole covers to maintain the bearings in the future. 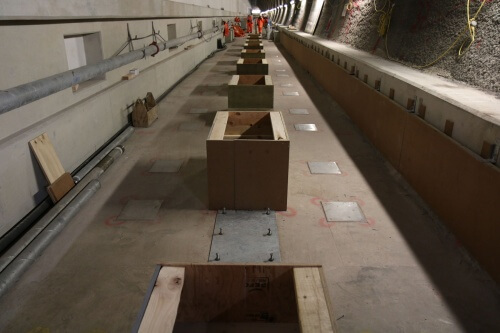 The bottom of the Crossrail tunnel will be coated in a debonding material, and then the concrete poured on top to form the 50 metre long slab. Once set, it can be lifted up by hydraulic jacks and then the bearings installed underneath.

At the moment, they are laying tracks, but these are temporary to ensure that everything fits in place. Later they will be replaced with 108 metre long sections of permanent rail (made from British steel in Scunthorpe, should you be wondering). 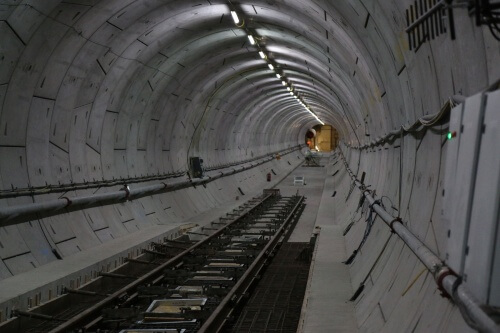 There are a number of ways of building floating track slabs, but this is the one that was used in the HS1 tunnels just outside St Pancras Station, and indeed, many of the people on that project are now working on this one.

One of the more interesting side effects of a floating slab is when trains apply their brakes, as that can cause the slab to move forward slightly, so to prevent a ripple effect running down the tunnel, a series of heavily reinforced concrete braking blocks are cast into the side of the track slab which send braking forces into the concrete tunnel rings. 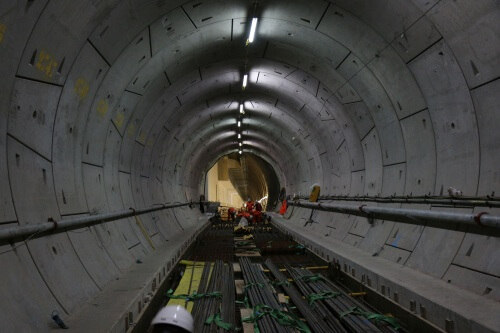 Helping to deliver the heavy steel being used in the construction is a most curious “spider”. What is formally known as a multi-purpose gantry is a vehicle that can drive along the sides of the tunnels carrying underneath whatever is needed at the construction site.

What’s impressive is how almost every part of the vehicle can adapt to the space its working in, and even collapse down to a space small enough to fit onto the back of a railway trailer. 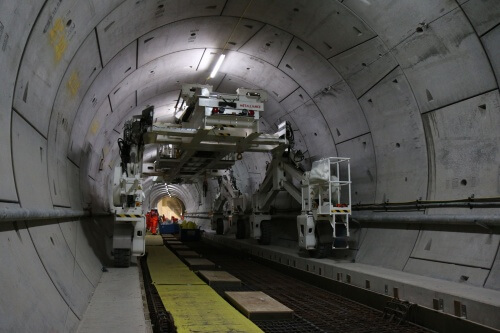 The additional cost of these floating slabs adds a modest £2 million to the cost of the line, and as a result, when trains rumble between the two stations, musicians in their basement recording studios shouldn’t notice, and neither should future football fans when a musical anthem is composed.

Crossrail is over 70% complete. Over 10km of permanent track has been laid beneath the Thames and running through South East London. The track laying works from the east are now approaching the Stepney Green area.

Track installation in the west of the route started in March and significant progress is being made towards the new Paddington and Bond Street Crossrail stations. Track work is due to be completed in 2017.

The Crossrail drilling rig is coming to the end of its phase 1 works in the Thames tunnel. Its focus now is to follow the concreting train towards Stepney Green. More than 2km of permanent mechanical and electrical (M&E) bracketry and tunnel walkways have already been installed. The brackets will be used to support all the power, communication and signalling cables that will be installed throughout 2016/17.

The railway systems team is on target to hand over zone 1&2 of the infrastructure for dynamic testing from November 2017.

The Elizabeth line services will operate from December 2018. 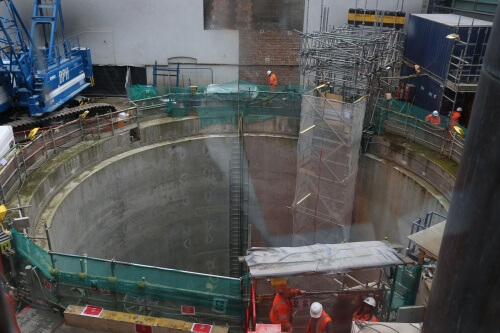 Looking down on the shaft down to Crossrail 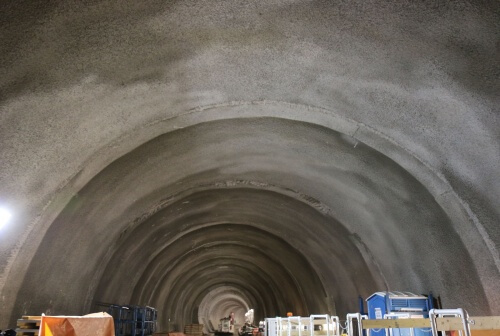 The dramatic spraycrete ceiling of the crossover cavern between the tunnels — dug by hand. 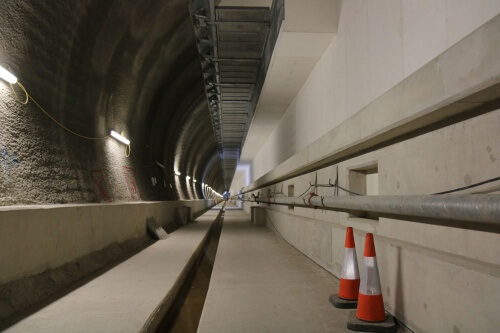 Tottenham Court Road station — standing on the track side, with the platform sealed off behind hoardings. 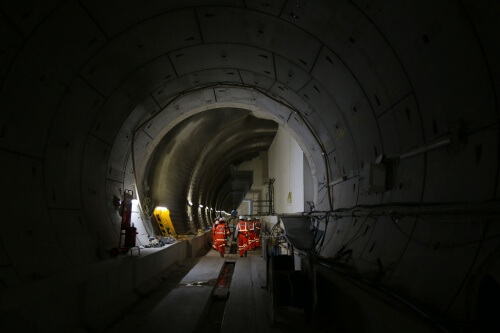 The approach to TCR station 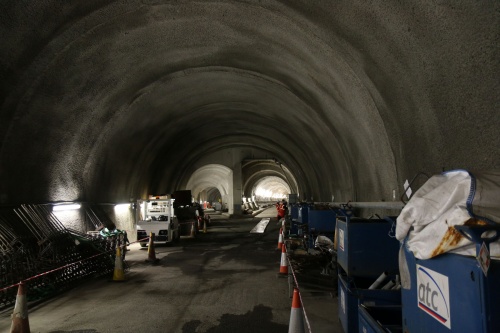 In the giant crossover junction letting trains eastbound trains reverse back to the west. 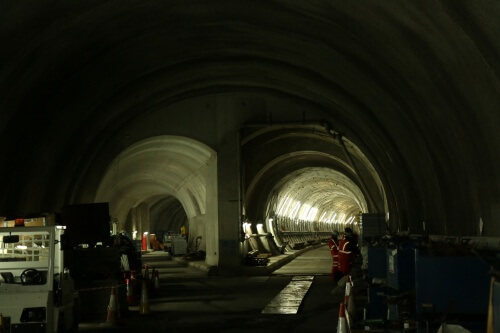 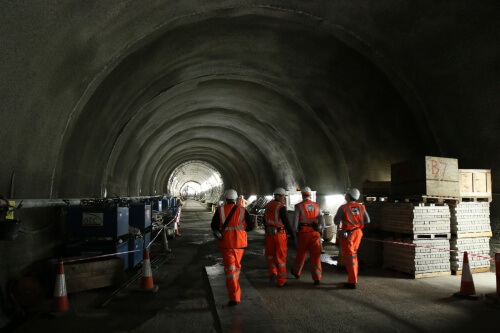 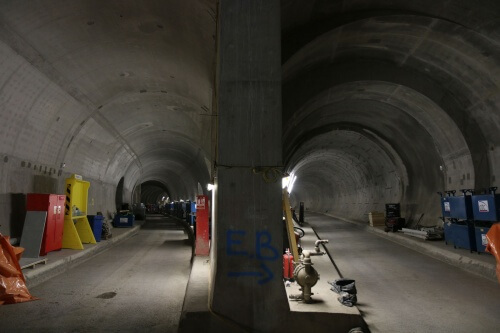 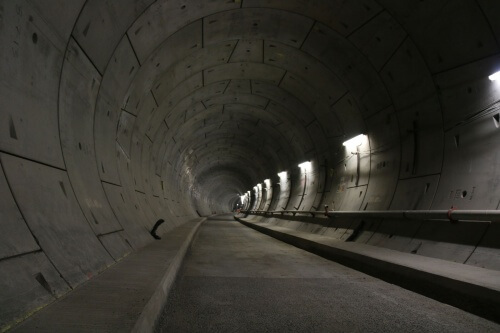 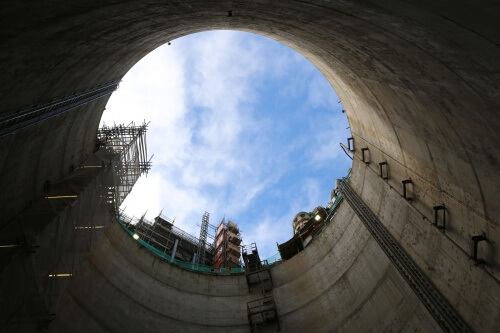 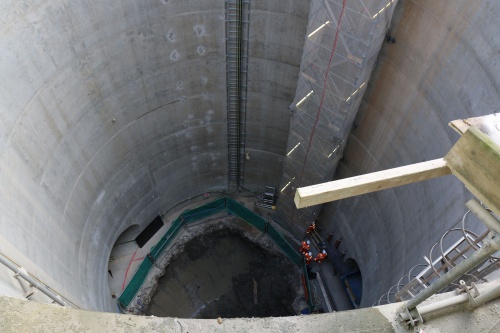 One day, this will be an emergency exit.