When the tunnel boring machines (TBMs) drill under London, the tunnels are often ever so slightly smaller than the hole dug out for them. Just a millimetre or two, but scaled up for the whole tunnel, and that can lead to subsidence at the surface.

To counter this, Crossrail will inject “compensation grouting” into the soil above the tunnel – but in order to do that, they need a building site to work from. Conveniently, as the TBMs approach Holborn, there is an abandoned tunnel that Crossrail can use – the disused tramway that runs under Kingsway down to Aldwych. 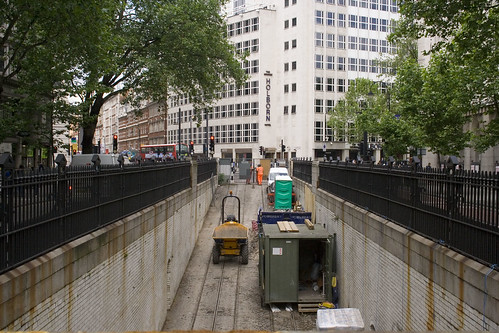 There is possibly a certain historic fitness in the choice, as the tunnel, while today primarily a concrete box also originally included a couple of “tube tunnels” when it was built a hundred years ago.

The Kingsway Subway sits under the main road which was itself constructed by tearing through an area dominated by what was at the time described as unsanitary slums. A series of Parliamentary Bills were passed in 1899 to permit the purchase of the land, clearing it and the construction of both the subway, the main road and the new buildings above.

The tramway, as it was originally designed started with a slope at Southampton Row, which still exists, then entered a couple of tube tunnels to duck under a sewer before entering a concrete box that ran down Kingsway towards Aldwych. Here it curved around under the road towards Embankment, and it ended in another couple of tube tunnels.

The “tube tunnels” were constructed by hand using a conventional tube train tunnel-digging shield, and it was said to have been a very difficult task at the Holborn end due to lots of water leaking through the gaps in the iron rings.

For comparison, modern tube tunnels are about 3.7 metres in diameter, but the tram tube tunnels were just under 5 meters. Crossrail tunnels will be much larger though, with a diameter of 6.2 meters

Probably worth noting that in addition to being excavated largely by hand, the waste soil was taken away by the one-horse cart generally used in London, which carried 14 to 14 cubic yard of loose material each. They carted it to barges in the Thames, whence it was taken to the “lowlands” in the Thames Estuary.

A curiously similar process is being carried out by Crossrail to dispose of its waste soil. Well, except the horses bit of course.

These works ripped out the tube tunnels at the northern end of the subway and replaced them with a continuation of the cut-n-cover concrete box. They also substantially altered the southern entrance by moving it to underneath the Waterloo Bridge instead of beside it, and deepened the cut/cover concrete box floor to cope with the taller trams.

The last trams in London ran in July 5th 1952 – so today is exactly 60 years since the Kingsway Subway tunnel closed to traffic.

After closure, it was used to store trams for a while, then in 1958, the southern end was converted into a road tunnel. The rest of the tramway has sat there untouched save by film crews, artists or for storage by the council.

Now, it has been leased to Crossrail.

Just inside the tunnel, the construction firm, BFK is digging down a shaft lined with concrete rings. Once deep enough, they will drill a number of narrow pipes sideways in a fan-like structure. As the tunnel boring machines arrive next year, they will pump grout into the tubes and into the surrounding soil to “compensate” for the soil missing below. 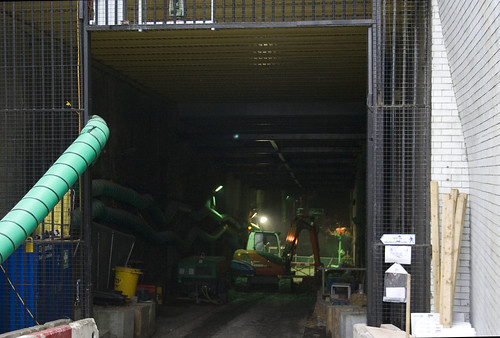 Digging in an underground tunnel has the advantage that they unaffected by the road traffic above – but has the disadvantage of being a very cramped working space. The shaft is almost as wide as the tunnel space it sits in – with barely enough space to squeeze around the edge. 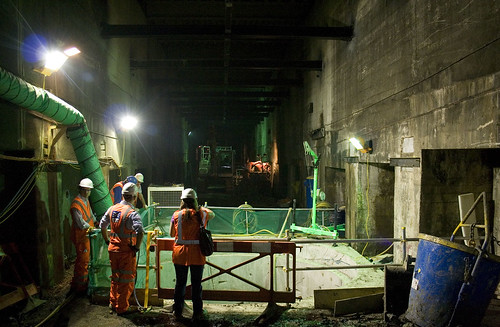 The shaft is being under-dug with a mechanical digger gouging out the London Clay, and then the concrete rings fitted underneath the upper layer in turn. 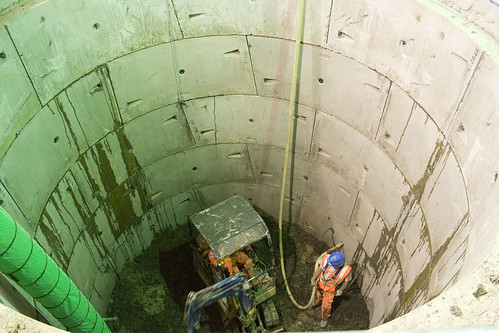 If you are wondering how they get in and out of the shaft – then a cage on the crane just about fits into the tunnel. 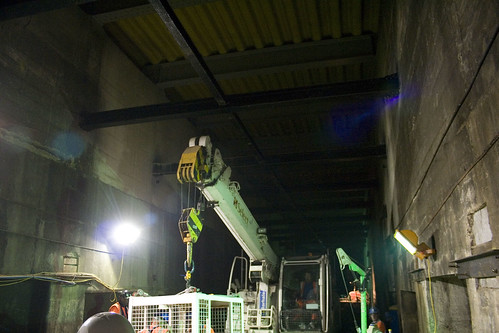 Another curiosity is that when the original land clearance took place and the subway was constructed, they wisely included two sizeable side tunnels next to the subway to handle service facilities such as gas supplies – and today electricity or telecoms.

Each of the semi-circular service tunnels also included a large pipe into each building to avoid later services needing to dig up the pavement again. 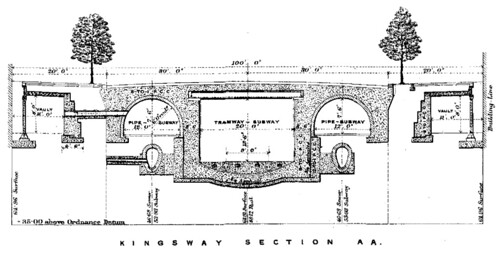 There is a contemporary photo of the construction work here.

Actually, quite a lot of the road improvements in the area, such as the Holborn Viaduct included side tunnels for underground services. There is quite a maze of them under the streets.

Of course, having come down here and squeezed around the compensation shaft being dug, it would be remiss of us to leave without going at least a little deeper into the old tram tunnel. Wouldn’t it?

Fortunately, our hosts from BFK and Crossrail agreed. 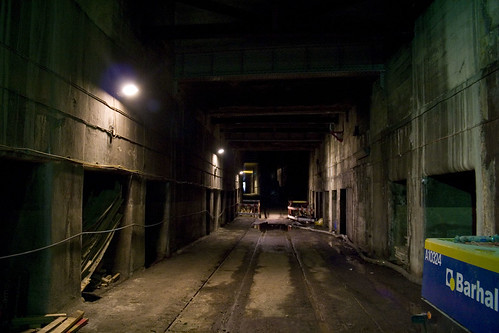 It’s not too far to get to the original Holborn tram station, with a deceptively low platform for people more used to trains than trams. The platform is so shallow as it matches pavement heights on the roads above. 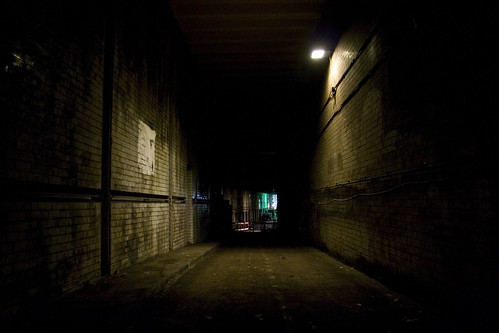 Two staircases lead up to the exits, which rather bizarrely to our modern minds lead to a narrow island in the middle of the road. Even if the trams were still in use, this insanely narrow exit would have closed a very long time ago. 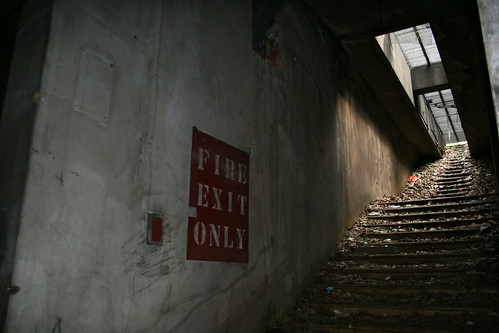 The roof of the subway is made of steel struts, painted a slightly garish greenish yellow. Although the tunnel has been essentially abandoned, it is used for storage by Camden Council who own it, as it does make for a useful place to store heavy materials, such as street paving slabs and the like. 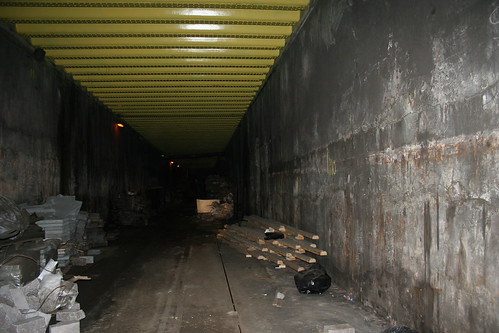 Although trams stopped running in London for many decades, and the rail tracks lifted from the road, down here in the deep dark of the tunnels, the tram tracks were still laid in the cobbled stones. I gather this site marks the longest surviving length of tram track left in the city.

Eventually though – as far as we were able to go down the tunnel as we reached the electricity substation, where we had to stop. Not far beyond that, the ramp leading to the inserted road tunnel comes down to block the tunnel anyway. 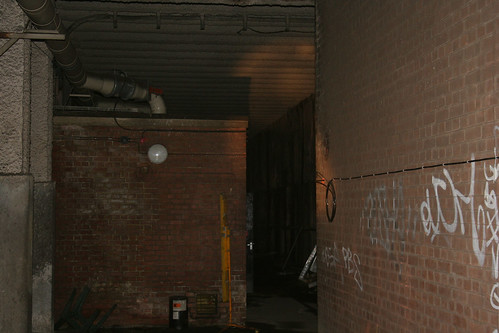 Once Crossrail finished using the grouting shaft, it will be filled in and the surface returned as close as possible to the original state. In a few years time, there will be no hint that fairly substantial building works took place here, or the importance of the site to the Crossrail project.

Nearby though, a rather larger shaft is also being dug down. This will eventually be used as an emergency exit should something unfortunate ever happen in the tunnels. The shaft, on a nearby side street, will be pile-driven down for 10 metres, then under-dug the rest of the way down, with the walls strengthened with sprayed concrete.

Once the TBMs have passed, they will cut two side shafts into the railway tunnels, and later, dig out the crossover tunnel that you can see in the below schematic diagram.

The large circle is the large shaft, and erm, the small one is the smaller compensation shaft in the tunnel underneath the Kingsway road. The purple patch is where the compensation grouting will be injected to protect the listed buildings above. 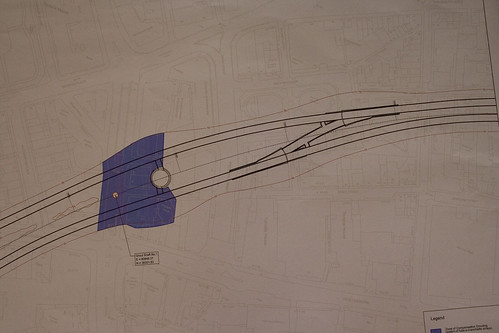 Thanks to Crossrail for arranging the site visit, and BFK for taking time out to show us around. Access to the Kingsway subway has been a supremely rare event ever since the trams stopped running through it.