While much of the Crossrail works are understandably focused on the tunnels under London, there are some significant upgrades being carried out on existing railways as well — such as the Stockley Flyover in west London. 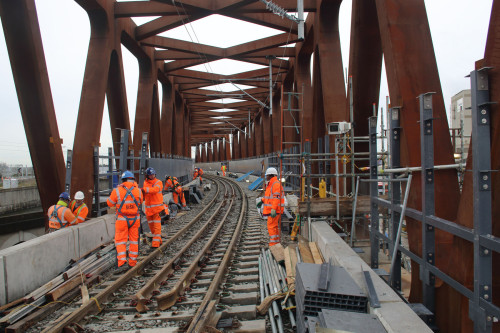 Just to the west of Hayes and Harlington station is an existing junction that sends trains down towards Heathrow, but that junction is now a potential major bottleneck when Crossrail trains arrive. Currently, the slightly complicated junction can just about cope with the level of traffic it carries, but add in future Elizabeth line trains, and it simply cannot cope.

So, what is quite a tight and complicated site already has to be massively rebuilt in a three-phase project lasting around three years, and a key milestone was recently achieved when a new flyover bridge was slid into position across the existing mainline railway tracks.

It also marks the first laying of fresh railway tracks specifically for the Crossrail project.

To give an overview of why the junction needs upgrading, and why it’s taking years rather than months to do it, recourse is taken to some slides provided by Network Rail.

What we have here is a single track bridge that carries traffic from Heathrow towards London and drops them in the middle of the four-lane railway highway. The Heathrow Express can then slip straight onto the high-speed lines, but the Heathrow Connect (and its later Crossrail replacement) have to cross the down track carrying trains away from London, to get over to the stopping “relief” line into London.

Not an ideal situation. Not a problem at the moment, but add in more trains, and the gaps to slip London bound trains onto the correct track shrinks to unmanageable levels.

So, the end result is a new bridge carrying London bound trains right over the tracks to the correct side of the railway. The existing bridge/ramp in the middle also gets modified to improve traffic flows, and a lot of other bits are shuffled around to fit everything in.

Phase 1 — the new bridge flyover has now been completed, and trains will shortly start using it.

But to get where they are called for the installation of the Stockley flyover — a huge new bridge, along with a long raised viaduct and two earth-filled banks. 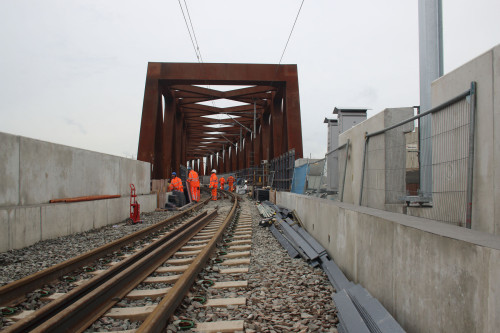 The viaduct, constructed in pieces in Romania, from Italian steel was assembled on site earlier this year and over several weekends in May slid over the mainline railway tracks to its final location. Unlike a lot of bridges that are slid into position, this one was also curved, and angled downwards slightly, which added to the complexity of the task.

In fact, what looks like one bridge is actually two spans, and there are some concrete piers supporting it at the joint — which were installed between live rail tracks.

Since its installation, work has continued to fit out the railway services, and just recently the tracks were completed — which garnered a flurry of publicity being the first tracks laid for Crossrail trains. Although in this location, they will be shared with Heathrow Express trains.

As such, the very first passenger trains to use the new flyover will start using it this very year — as major works to divert traffic over Christmas will enable the new line to come into service.

Track bashers might want to put the 30th December in their diaries, as the handover is at 4:40am, so probably the 5:15am train from Heathrow if you want the very first service.

In addition to running through the new bridge — finished in “weathered steel” so it retains its current rusty, and curiously appealing aesthetic, there is a new viaduct built up on 19 piers, which slowly drops down to an earth bank slope leading to the mainline tracks. 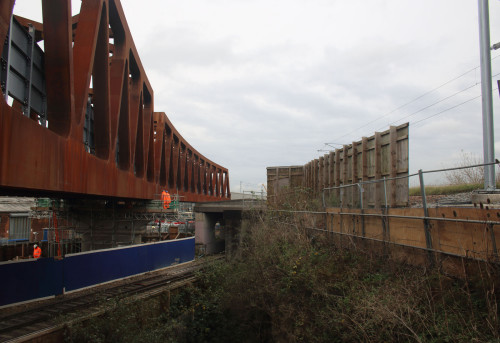 That viaduct is itself complicated by the need for a large concrete box to be built next to it to carry London bound trains over the tracks and back into the middle of the four-lane highway.

That box incidentally is filled with a lightweight expanded clay aggregate to add solidity to the structure. The infill is described as not dissimilar to being made from Maltesers. And that is phase 2, and also a really complicated bit of work, as there is barely enough space to fit the extra track, let alone build it.

Over Christmas, the central section between the four lanes of railway will have sheet piling driven down to create a stable barrier between trains and construction. 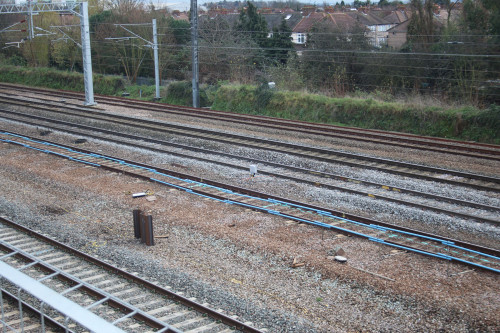 A test sheet pile has been driven in ahead of the xmas closure.

The old track will be pulled up and trains diverted around the site, while the new viaduct and ramp are installed.

Due to the nature of the location with very limited opportunities for extended track closures, and the narrow space they are working in, that next phase of works which could elsewhere be an 8 month project is here likely to take at least 18 months.

That is one of the issues with construction — it’s often less about what is being built, than where and when it is being built that causes the works to take so long.

Eventually, though, when that new flyover is built, some more tidying up of the signalling and junctions is needed for the works to be completed.

The Elizabeth line and Heathrow Express trains can make use of a junction without interfering with other rail traffic passing underneath.

Stage G — Construction of new flyover and ramp to carry London bound trains to the up-relief line. Adjustment of existing flyover to bring junction closer to the flyover and remove old tracks.

Stage I — Add spur to the new flyover to drop London bound trains onto the high-speed up lines.

Stage K — Clean up junctions so that the now down-only flyover can take trains from either stopping, or high speed tracks. 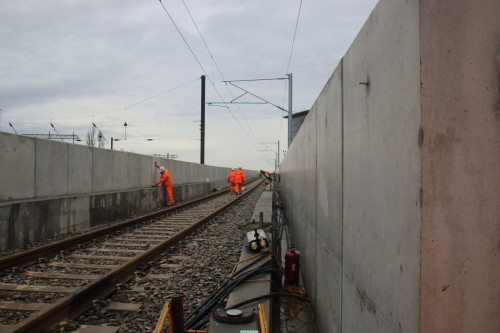 The depression will carry cables, and be covered over with the passenger emergency walkway 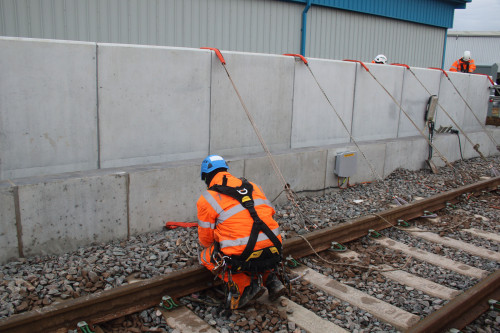 Abseiling over the edge of the walls to carry on works 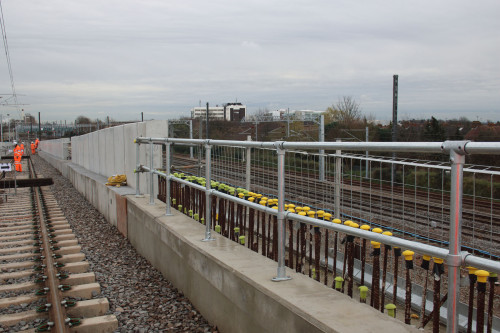 The joint between the concrete viaduct and the earth bank ramp 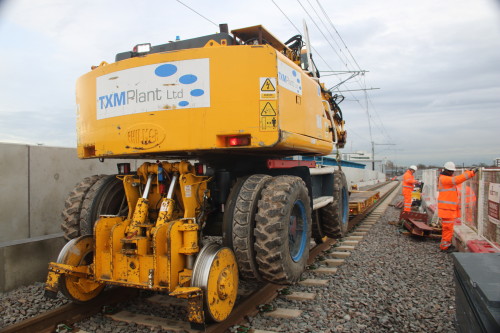 Some of the engineering equipment in use 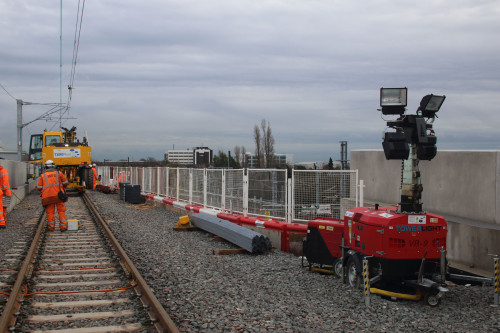 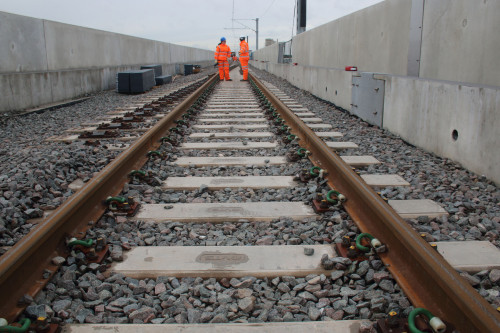 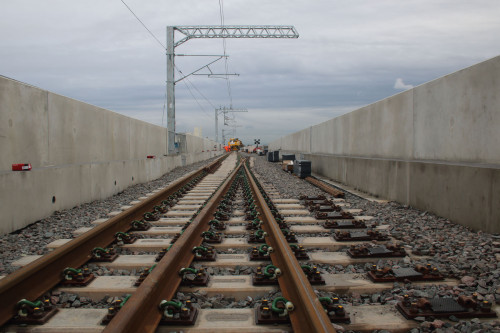 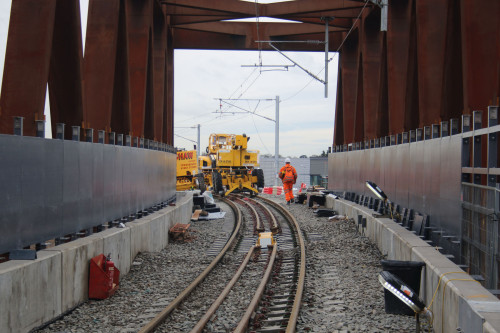 The sharp angle of the curve is evident here 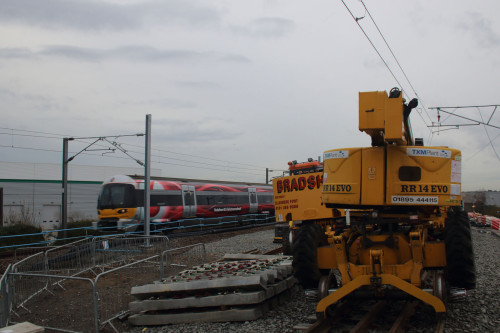 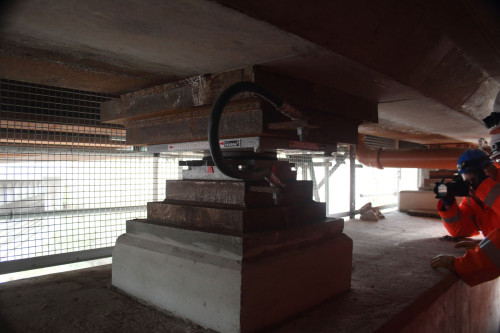 Underneath the flyover to see the support structures 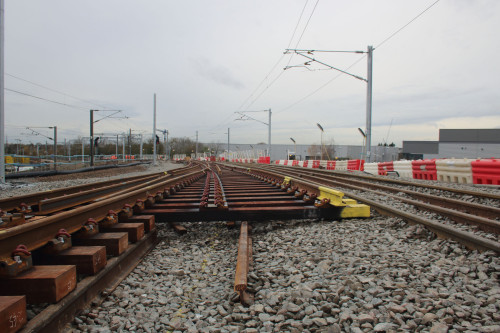 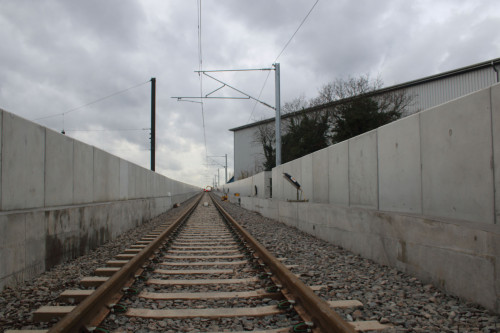