Several months late, or a week early, depending on how you look at it, Blackfriars tube station unexpectedly opened to the public this morning.

Closed in March 2009, it was supposed to open in late 2011, then a press release suggested it would open in February, but just yesterday, the TfL journey planner was suggesting it would stay closed until next Sunday. The usually informative Thameslink email newsletter was silent on the matter, and they usually tell you in advance if things are due to happen at Blackfriars.

It opened this morning, in a flurry of last minute alerts and press releases, so I took a wander along at lunchtime to see what it is like.

Superficially, if you are whizzing though on a train and don’t use the station, then apart from looking cleaner, you might struggle to understand what the delay was for.

This is a refurbishment that is visible to people who use the station – and maybe if you know what to look for, it’s a huge structural change. 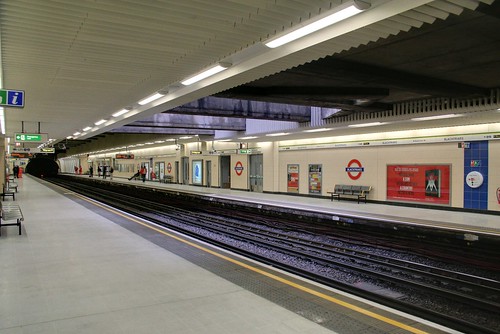 What most people wont notice though is that the roof of the station above the tracks is brand new – the whole thing is a new concrete raft that was erected over the lines while they were still running. That was necessary as the new ticket hall now sits on top of the tracks. 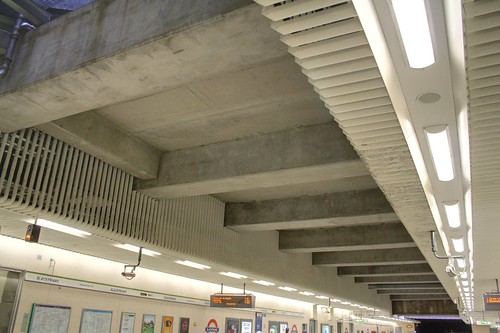 This also allows for what is above ground, probably the most striking aspect of the build, but is almost impossible to see below ground – a giant ventilation shaft.

I say almost impossible – it’s quite noticeable by the platform exits if you peer upwards above the tracks (without actually leaning into the path of trains). But only if you know to look for it. 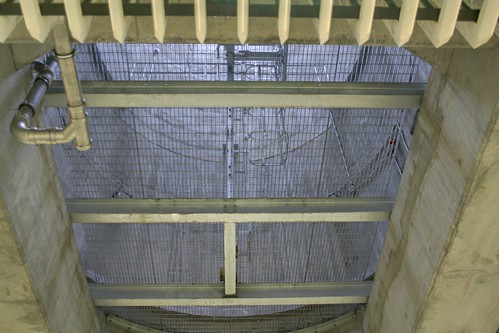 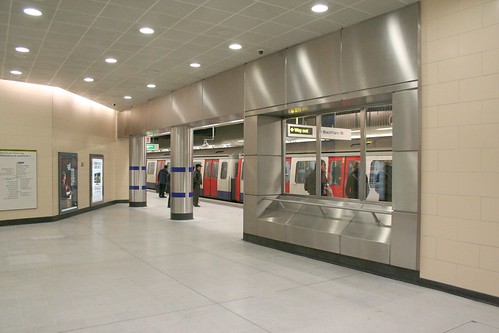 At ticket hall level, lots of ticket barriers, but very few ticket sales points. They seem to be adopting a staff-light design based on most users being commuters with Oyster cards. A new control room will keep an eye on things.

Up here though, and despite the effort put into the grand glass frontage, I am sure it is the giant blue ventilation shaft that will be most noticed by users. 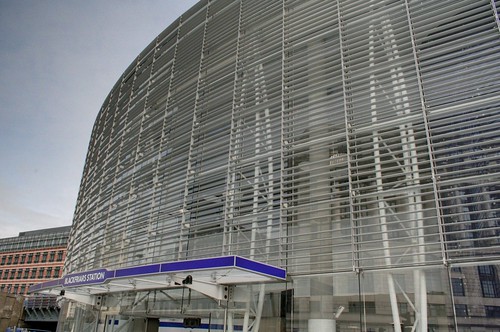 Despite the scattering of tube maps in trains that show the station closed or open, you’d think a regional rail map at the station itself would be up to date. 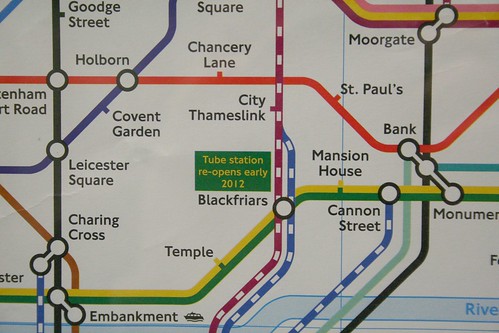 To get an appreciation of the construction work – especially the new concrete raft over the tracks and the boxes cut for the new stairs/escalators, Network Rail have this timelapse video.

I couldn’t resist the opportunity to catch this old tube roundel in front of the lovely Blackfriar’s pub opposite the station. Seemed appropriate.