The Petrie Museum of Egyptian Archaeology, that delightfully dusty museum in Bloomsbury has entered the modern age with a new 3D graphics library.

With funding from Arts Council England, the Museum is making 3D images of artefacts from its collection available though a conventional web browser. The library allows visitors to rotate and zoom in on the 3D images of artifacts, catching fine details often not visible to the naked eye.

The Museum said that it plans to expand the image library to include a section in which visitors will be able to the history of objects from their use in Ancient Egypt to their excavation in the 19th century to their present location in the petrie museum galleries through a series of 3D navigation tools.

As a tool it is good way of seeing the objects in detail, and doubtless a huge boon for academics. I must confess though, I prefer my viewing to be done in the museum, and probably inside a glass case.

There is something, difficult to define, but tangible about being in the presence of the original, even if you can’t study it in such close detail. But then again, I am not an academic.

…incidentally, if you look up the Canopic jar lid and wiggle the mouse around, you can do a good impression of Max Headroom. 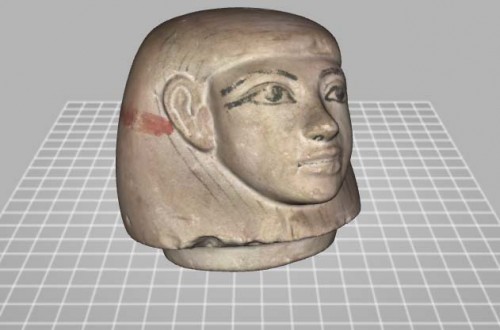 In a related observation, a replica of the tomb of Tutankhamun is being opened in the Valley of the Kings, in order to cut down visits to the original which is now suffering the effects of 90 years of human breath inside its poorly ventilated interior.

A comment was made on the news from one tour guide that this was a bad idea as any city can then build a replica and no one would come to Egypt.

I think that is wrong, mostly because Egypt is more than just one tomb, so a visit to the replica tomb is just one part of an itinerary, and as it is sited in the Valley of the Kings, is a tangible replacement for the sealed off original.

Yet, even if replicas are built elsewhere, I think it would be a good thing for Egypt. The huge galleries of Egyptian artifacts in museums around the world are a free tourist advert for holidays to Egypt.

People don’t wander into the British Museum and then dismiss a trip to Egypt. Quite the opposite. A replica of the Tomb of Tutankhamun in the grounds of the British Museum would be wonderful — and would simply make me hunger even more for a trip to see the country where the original is sited.