Once a familiar sight on the streets of the UK, the telephone box has faded from important utility to quaint heritage as the mobile phone killed off the need to visit a specific location to make a phone call.

The derelict pay phone boxes have sometimes been converted into a library, a grocery shop, first aid points, or left to decorously decay into the undergrowth.

Or be turned into art works. 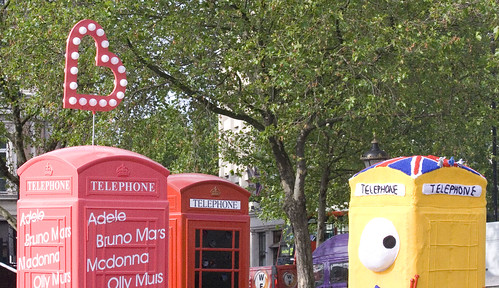 This is the latest in a growing trend of getting people to decorate a “shape”, scatter them around London and then sell them off afterwards. Sometimes it works, and frankly, sometimes I look at them and wonder if they chose the person for artistic skills or their celebrity.

This time, BT and ChildLine have chosen the famous post office phone box as their muse, and encouraged suitably famous names to daub paint and other accoutrements on them. Well, actually, white plastic replicas of the phone box. I suspect painting 80 real phone boxes would have given English Heritage a heart attack, as many of them are now listed buildings.

A cluster of some of the phone boxes are on display together in Trafalgar Square today only, then they will be scattered around London for people to hunt down before being flogged off to raise money for the charity.

Sadly, the one which their official press release showed, and which looked the most interesting was not on display this morning, so I may want to hunt that one down. It’s by Gerry Judah and is a white sculpture of the phone box broken into pieces in a rather abstract manner. 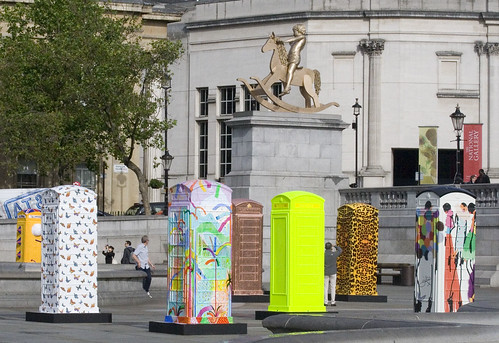 Others on display included one that needs to be wound up, which then releases artificial flowers from orifices in the box, only to fade away when you let go. Not entirely convinced that will be vandal proof, which is possibly why there were a lot of security guards around the place this morning.

Some are undeniably phone boxes that have been painted, but others have been quite substantially altered in their physical shape. I think the oversized pigeon is probably my favourite sculpture, while this 8-bit computer graphics design was my preferred paint-job. 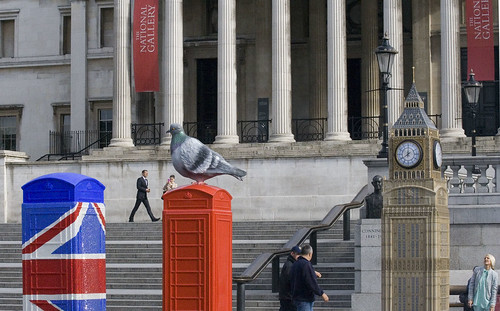 Either deliberately, or just a PR person not thinking properly, but they made the most obvious photo that people will want to take today a bit bloody difficult – Big Ben and BT Ben in the same photo. 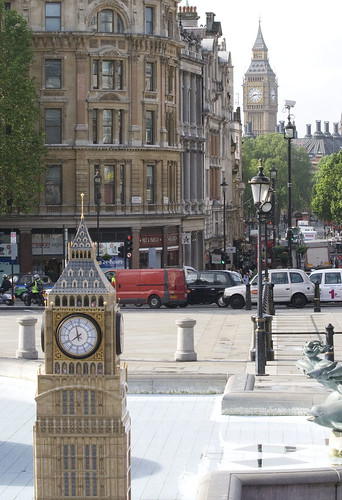 The phone boxes will be in Trafalgar Square until sundown tonight.

A full gallery of them is here, my photos are here, and they will be on display around London until 18th July.

No, the door on the phone box doesn’t open.