There have been calls for something to be done ahead of the launch of the Elizabeth line (nee Crossrail) at the end of 2018, as it is expected to see a big surge in shoppers.

At the moment, the street is mainly open only to taxis and buses, with some limited access to minicabs and delivery vans out of the daytime peak hours. The issue is how to expand pedestrian space, while ensuring that access is afforded to those who need mobility.

With the recent changes to bus routes being implemented, there are already going to be fewer buses clogging up the streets. While it’s hardly a surprise that a third of traffic on Oxford Street is black cabs, it is a surprise to learn that they carry just 2 per cent of visitors.

While a percentage of that is going to be people with difficulty walking, realistically, Oxford Street is being choked by the rich who can afford a black cab for door-to-door shopping.

The consultation being launched is going to be delivered in several phases, with the initial one being likely to be limited to simply decluttering a stretch of Oxford Street. That means fewer street signs, seats, and possibly bins.

By some streets standards, the pavement is already fairly clear of clutter, so the impact is likely to be minimal in the short term. Removing some poles and telephone boxes won’t change much.

It also only covers the section between Oxford Circus and Selfridges department store.

In the long term, they plan to study whether buses and taxis can be shunted onto side streets, or removed altogether from the area.

What’s unlikely to happen though is total pedestrianisation of the street, which goes against a policy statement from the Mayor of London who said just last year that it could be traffic-free by 2020.

That reversal could be due to strong pressure from local groups not to go ahead and ban traffic, although the retailers were generally in favour, there are residential areas right up against the shopping zone.

Attempts to pedestrianise the street have been considered since at least the 1970s, and the difficulties always found insurmountable. Maybe plans for an overpass for busses could be resurrected.

What’s not addressed in the consultation though is whether predictions of a surge in shoppers will be a short-lived boost that slowly dies off as online shopping replaces it. The area is already being denuded of some sorts of retailers — who goes to Tottenham Court Road for electronics these days?

Will online shopping expand, as some expect, leaving high streets a mix of coffee shops and cafes, with click-n-collect retailers acting as mere showrooms for their online customers? Will improving Oxford Street save retailing, or be one stage towards an inevitable future as a long row of cafes?

The consultation runs until 18th June, and is here. 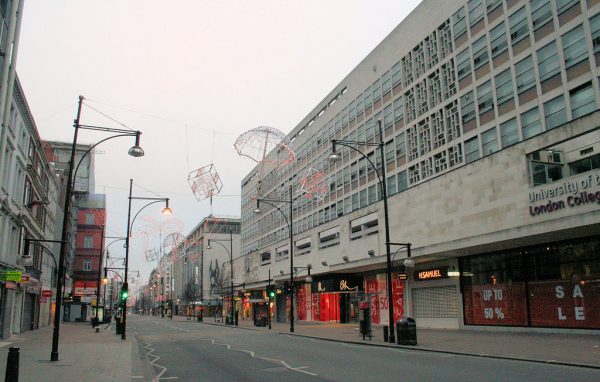