A staple of wet winter Sunday afternoons, this totally insane film about a bunch of nannies foiling a plot by Chinese spies is deliciously British, even if it was made by Walt Disney.

It fits the genre so popular at the time of its making of dreamy eyed English traditions as seen from the USA, such as Mary Poppins or Bedknobs and Broomsticks. 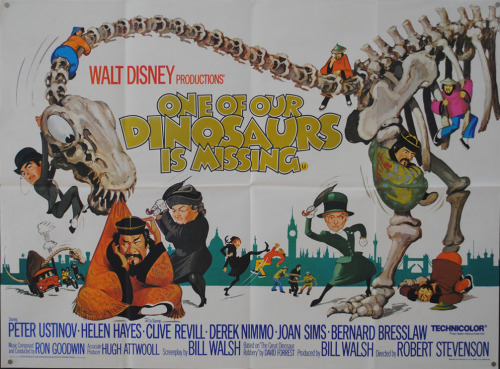 Derek Nimmo plays the classic “Tim, nice but dim” upper class civil servant who is being chased by Chinese spies and manages to hide a secret document on a dinosaur in the Natural History Museum.

The Chinese then decide to steal the dinosaur, but their lorry is hijacked by the doughty nannies, leading to one of film history’s greatest car chases, as a lorry with a dinosaur in it races around foggy London pursued by the Chinese.

Throughout this, Peter Ustinov is a brilliant, if today somewhat racist Chinese spymaster, but done to lovingly that only the most swinish of bores would want to complain.

In the end the secret of the stolen document is revealed, and if you don’t know what it is, then get along to the Grant Museum on the 25th November at 6:30pm.

The film is followed by a free drinks reception in a private view of the Museum. This event is free and there is no need to book.

…oh, and the dinosaur? It ended up on a planet far away, called Tatooine.