A couple of weeks ago – and a mere eight months later than planned – a new train station was opened to much local fanfare marking the regeneration of one of London’s airports, and as a sad train geek (and occasional aircraft geek), I felt compelled to go and have a look.

The airport is the ambitiously named London Southend Airport, which is arguably not that close to London, but more of that later.

The airport has been in the news rather a lot recently though, as it was bought by the Stobart Group, of green delivery trucks fame in 2008 and they have started a fairly large revamp of the site, replacing the old brick terminal building with a shiny new edifice on the other side of the car park.

It was also recently announced that EasyJet will fly from the airport from next year, which may offer a glimpse into the market the airport is aiming to serve, and it won’t be London’s city gents flying off to Geneva.

The new train station though – built after the latest Google photos were taken of the area – is a bit difficult to buy tickets for. Although I checked the times online, when I got to Liverpool Street station, the ticket machines refused to sell me a ticket to Southend Airport (SIA) station, so I have to buy a ticket one stop further along and get off early.

Another indication that the station is a bit too new for some, was the sign at Rochford Station reminding train drivers that there is a new station on the line, and that it would probably be a good idea to stop there.

The station past Southend Airport may be just a few minutes further along, but with trains only every 30 minutes on a Sunday, it would have been a long wait to go back again. 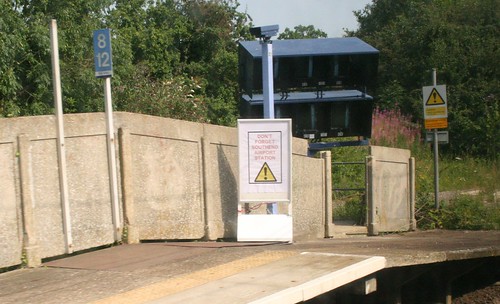 Despite the London prefix, Southend Airport is still very small, and so is the train station, being really not much more than a couple of platforms and an oversized pedestrian bridge linking the two. The local pigeons have already decided where their favourite roost is to be, judging by the white stains on the black tarmac platform.

Arriving at the station, I was not, as I might have suspected the only person to get off, but was joined by maybe half a dozen other passengers, and the opposite platform had maybe a dozen passengers waiting for a London bound train.

An airline operating out of the airport has already made its mark in the train station, advertising its flights to Ireland. Seems odd to me to advertise flights to train passengers who will have already bought their tickets before they arrived. The indication you are at an airport should be adverts for duty-free booze, cigarettes and credit cards. 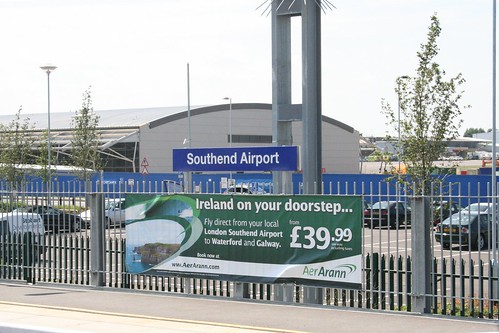 The overbridge is far larger than you would normally get for a train station of this size, and had a distinctly airport aesthetic to it, almost reminding me of the walkways that take you from terminal to aircraft. A large window facing the airport will delight plane spotters, and the large window on the other side will annoy local residents wanting a bit of privacy. 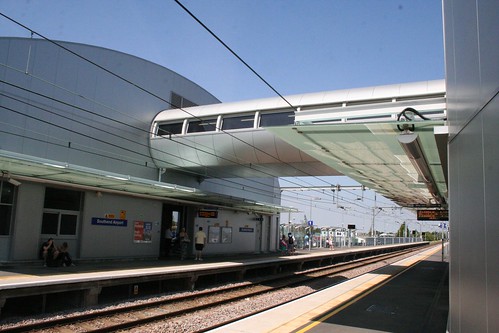 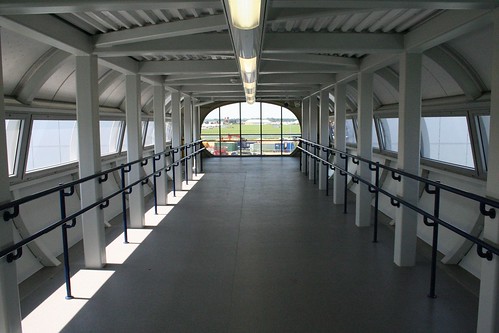 A large canopy outside takes you to the road and a four-minute walk to the terminal building. When the new terminal is ready, it will be sensibly next to the train station. But not yet.

Leaflets by the lift next to the stairs promoted the Eddie Stobart fan club, and the security car that followed me around the place while I was taking photos was from the Stobart security service. I didn’t stop for a coffee in the Stobart Cafe. 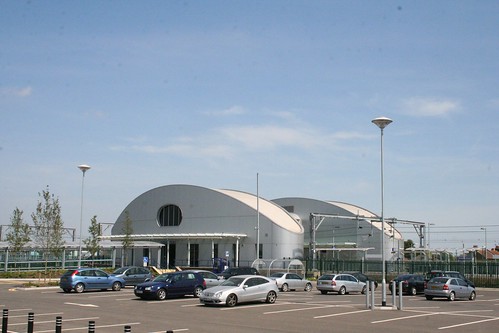 Southend Airport, originally an RAF base during World War 1, has been a “London Airport” ever since Southend Council sold the “Municipal Airport” in 1993 and it was rebranded by the then owners.

The question remains, what makes an airport a London Airport – is it is geography, market served, journey time to London, or some other descriptive.

I certainly recall Heathrow being displayed as London Airport on motorway signs when I lived periodically in the UK as a child, but today we accept that London has many airports, so the road signs have changed.

If we are talking about journey time from the airport to central London, then until the Heathrow Express opened, it would take me about 40 minutes by Picadilly Line train to reach Zone 1. A train journey from Zone 1 to Southend Airport takes around 50 minutes.

Compare that to catching an EasyJet flight at Luton (40-50 mins) or Gatwick (30 mins), or Stanstead (45 mins), and Southend doesn’t look that bad by comparison.

I just can’t shake the feeling though that its customer base is going to be less for Londoners than Essex people who will find Southend a much easier airport to get to than Stanstead or Luton. Should it retain the London descriptive then?