One of only four surviving banners that formed part of the Royal Regalia used at the funeral of Oliver Cromwell in November 1658, is to be put up for sale next week.

The banner – also known as an escutcheon – is painted with his arms as Lord Protector of England, Scotland and Ireland and surmounted by the royal crown. 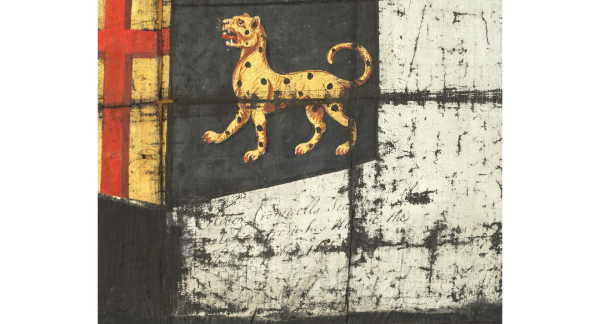 Of the more than two-thousand escutcheons used at the funeral ceremonies, only four are known to have survived. One at Westminster School, one at the Cromwell Museum, Huntingdon, and one at the Museum of London.

This Cromwell banner is the only one in private hands.

It is estimated at £8,000-12,000, which to my mind seems modest for such an important piece of English history. You can buy a print of the one owned by the Museum of London for just £25 if you prefer.

The banner was also the subject of the BBC programme Antiques Roadshow Detectives, in March 2015. Scientifically analysed, it was compared to the other surviving examples and found to be in particularly good condition. An inscription added in the 18th century, suggests the escutcheon was used on Cromwell’s hearse on the day of his funeral, 23 November 1658. 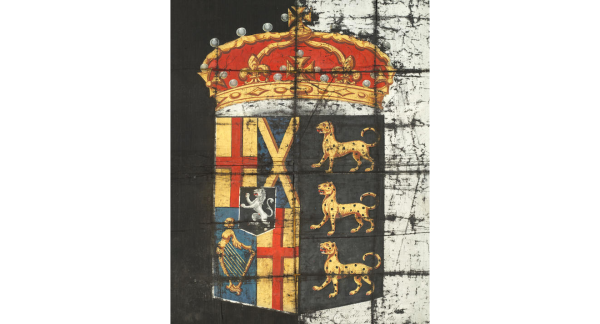 Following the regicide of King Charles I, Parliament was faced the problem of how to handle the legal powers wielded by the King, and rather than revamping politics entirely, they effectively vested all the power of the Monarch into Cromwell’s hands.

Rather than abolishing the monarchy, the civil war had effectively resulted in nothing more than a change in Monarch.

Although Cromwell resisted attempts by Parliament to crown him king, he was routinely referred to as ‘Your Highness’ and his funeral had all the trappings of a Royal ceremony.

The obsequies following his death on 3 September closely followed the precedent set by past royal funerals. Contemporary accounts tell of the body lying in state in Somerset House from 18 October to 10 November. Four rooms were set aside for the purpose and, in one of them, a wax effigy of Cromwell was laid out robed in velvet and ermine as a monarch would be. holding a sceptre and orb with an Imperial Crown at its head.

Although his son took over, just as would have been normal in a Monarchy, Oliver Cromwell’s death effectively marked the end of the brief period of republican power in Britain.

The escutcheon will be on display at Bonhams from Monday to Wednesday next week.