Of College Chapels and Steam Trains

Deep within the heart of King’s College on the Strand can be found a most marvelous chapel and a dinky steam train.

The College Chapel at the Strand is one of George Gilbert Scott great ecclesiastical masterpieces. A replacement for an earlier chapel, it sits oddly to my mind, on the first floor of the college.

There’s no reason why that’s wrong, but it just feels curiously odd as churches tend to be on a ground floor, if only for the historical accident of being made of very heavy stone.

What was designed is in part a style that harks back to the ancient Christian basilica, with iron columns replacing the old stone. The placement of the columns is no accident, as they line up with a convenient line of columns in the rooms below, thus providing the strength needed. 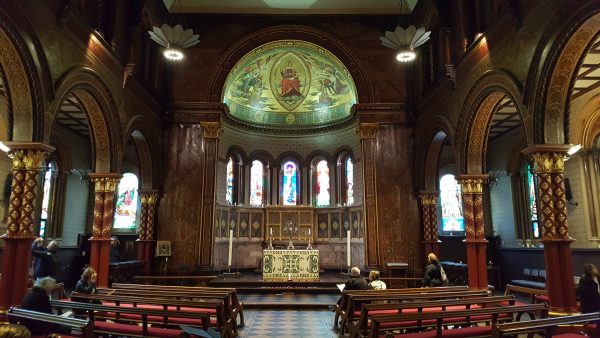 In addition to the construction costs, a number of donors presented stained glass windows depicting scenes from the Gospels and characters from the Old and New Testaments. 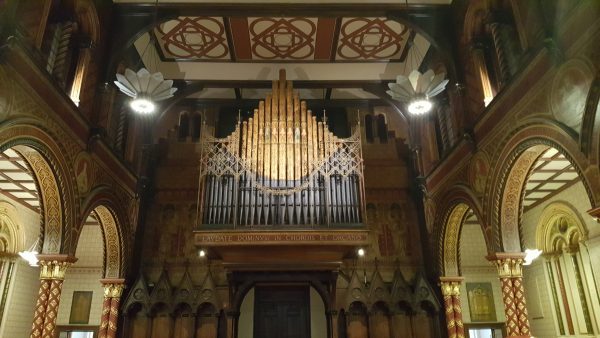 Most of those windows, and much else was destroyed by WW2, and later restored to what we see today, which is a wonderfully richly decorated chapel that’s just about the right size for the decoration to delight without overwhelming the visitor.

The chapel is still in daily use for the students, and on special services it’s also open to the public. 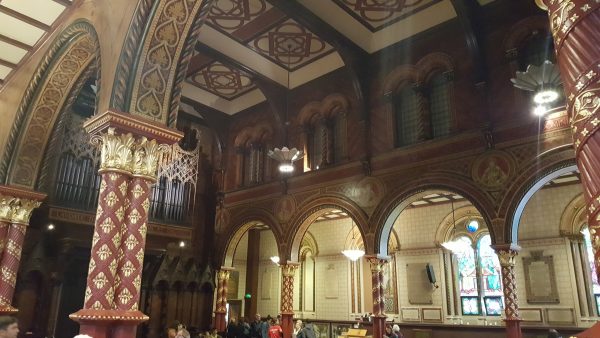 It is sometimes said that the very best Church of England vicars are also enthusiastic fans of steam trains, so it’s apt that a college chapel should have a steam train on its doorstep, although that is just a happy coincidence in this situation. 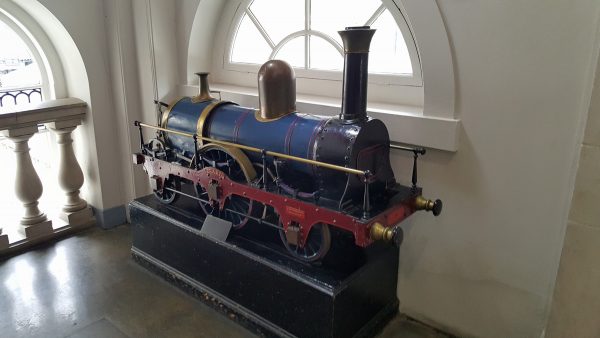 On the landing is a 15 inch gauge 2-2-2 steam locomotive named Peal which is the oldest large-scale model railway engine in existence.

Built by a former student of the college, Peter Brotherhood who later went on to set up a large railway engineering works at Chippenham. No one is sure why he built the one-quarter size scale model, but it may have been an aid to his lectures.

Brotherhood later gave Pearl to the George III Museum at King’s in 1868, having no further use for it.

By 1958 it was in need of restoration, which was carried out by the college’s Railway Club, but sadly hopes to restore her to working order and set up a miniature railway line in the college were thwarted by the state of the boiler.

Apart from a trip to Romney in 1987, she has sat on the staircase, passed by students daily.

Fans of a certain film might find this photo of the locomotive being taken down the staircase in 1987 from the college’s newsletter oddly familiar. 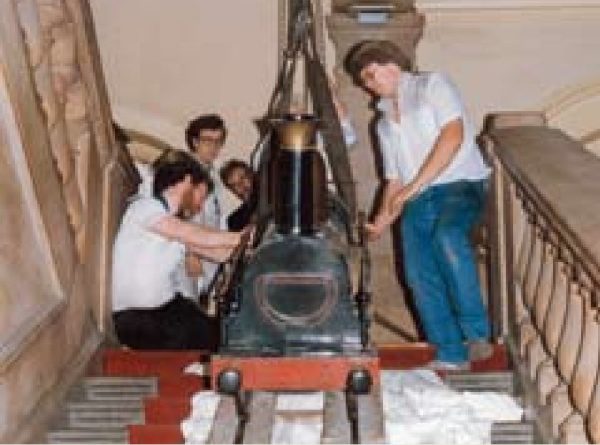