The corner of Oxford Street and Tottenham Court Road is a place of considerable crush and bustle thanks to the very narrow pavement, tube entrance and market stalls trying to sell watches and tourist tatt. For that reason, when needing to traverse that bit of London, I tend to take a slight detour to a road which acts as a convenient bypass around that area.

Hanway Street – for that is its name – is an incredibly useful little road, and lined with small shops and the back entrances to larger shops facing Oxford Street. For such an odd little road – it is utterly steeped in history, and actually pre-dates much of the grander roads in the area.

I have highlighted the road in pale yellow on the Google map below. 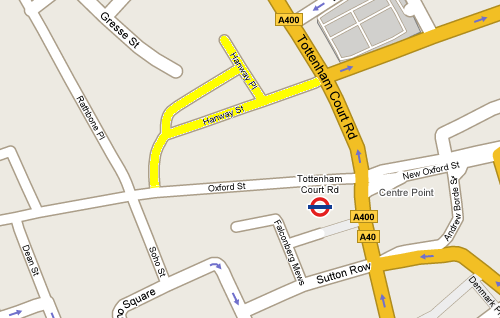 Hanway Street actually follows the line of an ancient footpath, which can be reliably dated all the way back to the time of Henry 8th, although the first significant construction seems to have started around the 1720s. By the 1740s though, much of the land had been developed, as can be seen from the following map – taken from John Roque’s Plan of the Cities of London & Westminster, 1746. Records of the time also indicate that it was for some time known as Hanover Yard, before becoming Hanway Yard – then finally Hanway Street. 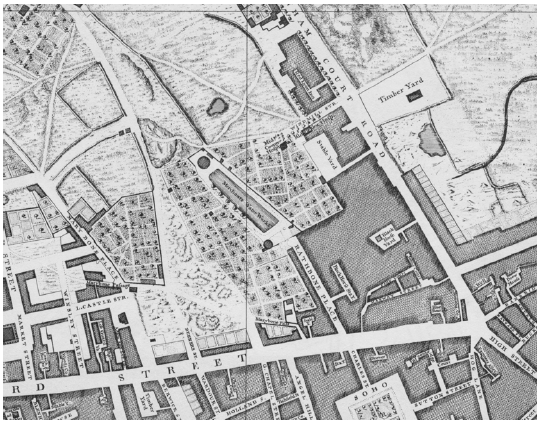 A famous resident is the builder William Baker – who was a resident of Hanway Street at the time he laid the first stone in nearby Baker Street in 1755. In 1808, there was living in the street a certain Mrs. Elizabeth Alexander, aged 106, under a portrait of whom, published in that year, appear the words, “Supposed to be the oldest woman in England.” Whether she actually was 106 years old we may never know.

Quite how the street acquired its name is not certain, but some records suggest that Jonas Hanway, who introduced the umbrella to England may have been involved with the Street. Certainly, if he had a store on the street – which was noted at the time for its fashionable stores – then his commercial success could have lead to the “yard” acquiring the nickname of Hanways’ Street which later stuck. 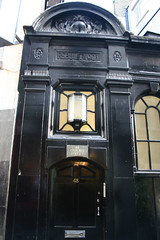 If you enter Hanway Street from the Oxford Street end, there is a small selection of shops here, mainly catering to the music and style market. The road is very narrow and the pavement is ideal for pedants who want to sue for tripping over a badly laid paving slab – but I like it. It has character.

Just a few yards along, on your right is this interesting doorway, backing on the rear of the Cafe Nero’s.

The building next to it may look rather shabby, but look up and notice this little sign which has been saved from the previous building on the site. It reminds people that the road was widened in 1841, with the land donated by one E.H. Baldock. Baldock’s was shop and “a sort of museum for Chinese horses and dragons, queer-looking green vases, and dollsized teacups;”, as recorded by the author of “The Old City,” who wrote under the assumed name of “Aleph,”.

Despite the disparaging report on the store, it should be noted that it was the support of Baldock’s for the porcelain from Davenport pottery in Staffordshire that lead to that company’s success and early expansion. 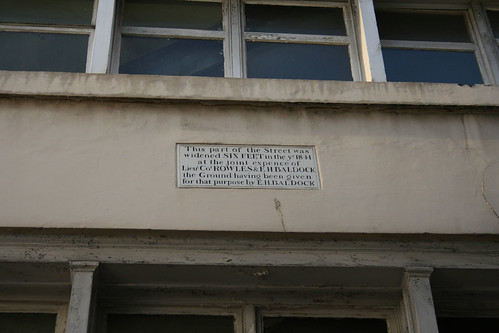 Walking around the corner and you are faced with a wide road which heads straight to Tottenham Court Road. On the right is a rather imposing red building, which has a slight feel of being built as part of the early tube network – but was actually good entrances for the stores facing onto Oxford Street. On the left is also a camera shop and hairstylist, with quite an impressive graffiti/artwork on the second floor. 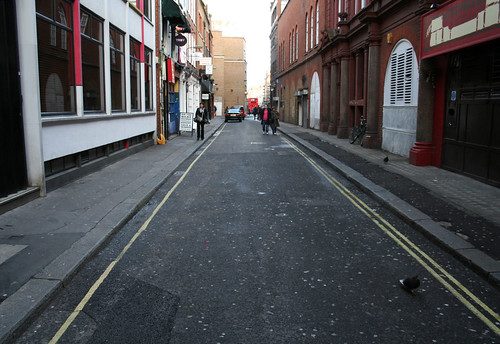 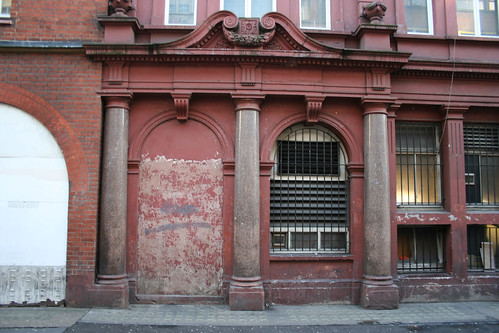 Also worth noting, but almost ignored are the bulbous headed bollards – which are actually listed as historic. They are old boundary markers for the Parish of St Marylebone and under many layers of paint, the old coat of arms can just about be seen.

Heading down the road, you might take a turn to the left onto Hanway Place – which loops back around the Street. At the end of Hanway Place is a modern and quite famous Chinese restaurant, Hakkasan – which apart from getting good reviews all over the place, also appeared in the movie, About A Boy. I haven’t seen that film though – or eaten in the restaurant, yet.

On Hanway Place is also the Westminster Jews’ Free School, which was opened in 1811. It’s now offices and the back end of a branch of Sainsbury’s. A famous pupil of the school was Harry Ehrengott, who was a fireman during World War Two, and after a bomb hit a building he was in – killing lots of people, he managed to drag several people to safety. He was awarded the George Cross for Bravery, the highest honour that can be awarded to a civilian, personally by King George VI – the only fireman in London to be honoured with the George Cross during the war. 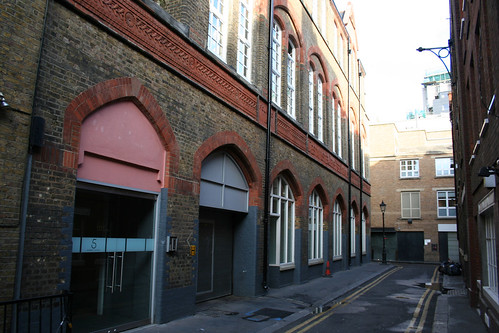 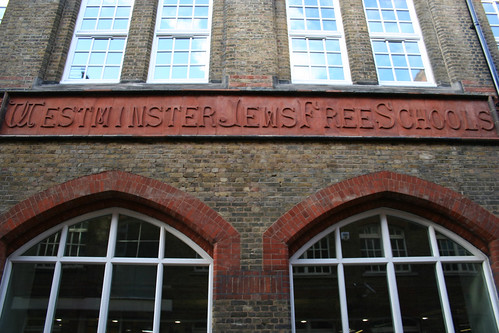 Overall, it is a nice little bit of London that many people use, as I do – as just a quick way of avoiding the worse congestion of the Oxford St/TCR junction – but is actually steeped in history, if only they knew it.

1 Pings/Trackbacks for "Of ancient paths, umbrellas and Chinese restaurants"