Last night, I wandered along to the Southbank to see what was being touted as a fairly major PR stunt for the forthcoming Watchmen movie. The event was billed as:

“Dr Manhattan, the blue skinned, super-powered being beloved of all Watchmen fans, will rise above the murky depths of the Thames to a height of over 70 feet and tower over all those who dare to attend.”

Wow I thought – and while not overly excited about the movie, this just had to be seen.

Double checked with the Port of London website to see where the barge would be moored (a handy tip if ever attending a river event!) and wandered along to have a watch.

Got there a bit before half past seven and various people were already securing prime spots on the Hungerford Bridge – which seemed to be the best viewing point and I quickly ran off to grab a coffee and returned to get a good location. There was a barge blowing a huge screen of water into the air and projecting various images onto the wall of mist – along with some spotlights whizzing around for dramatic effect. 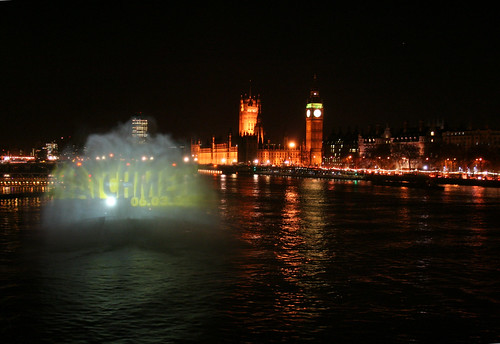 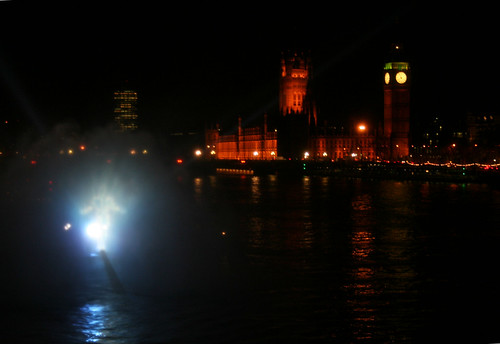 The bridge filled up with various types, but the majority had that stereotypical look of the sort of person who will like the movie – and as Big Ben tolled the 8 O’Clock for the event, the bridge went quiet in anticipation.

Nothing happened. Hmm, wait a bit – 8:05, nothing going on; 8:10 and still nothing; 8:15 and yet nothing is happening – just the same video on a wall of water about 20 ft high. Ohh, spotlights started blinking, so excitement rose – but nothing happened. I knew the warning about the barge on the PoL website said it finished by 8:30, so as the crowd started to wander off disappointed I hung around a while longer.

Suddenly, a huge yellow smile was beamed onto the Shell Building – gasps of delight as the event was about to start – then it was switched off.

8:30 came and went, with no sign that anything was going to happen.

It was a freezing cold night and despite constantly putting alternate hands inside jackets to try and keep them warm, by now I was so numb from the cold that I could barely use the camera – and was desperate to use the loo.

At 8:40, the bridge was manned by just a few die-hard fans and random people who stopped to have a look as they walked over the river – but I decided to give up by then.

What could have been a really impressive spectacle turned into a PR disaster – which could have been mitigated if the PR firm had some staff on the bridge explaining what was happening. But no PR people were around, no information was provided, and after over an hour of freezing on the bridge, I had had enough.

Not impressed – and no chance to get the photo of Dr Manhattan rearing up over Big Ben that  I had hopped for. 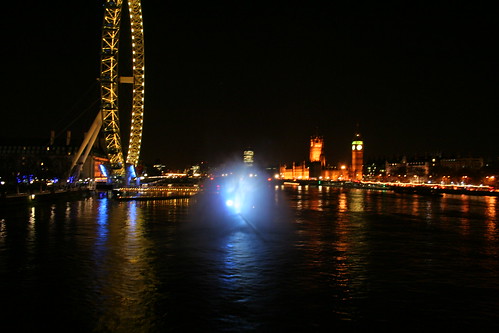