As I was up at Northolt at the weekend, I decided to wander over to have a look at Northala Fields – a local community park that has been recently refurbished with four huge mounds of earth. The park has been undergoing redevelopment since 2004 and opened to the public late last year, although the official opening isn’t until next month.

Apart from the usual “park things” and a new fishing pond – the most dramatic addition is the four new huge cones of earth which offer some quite dramatic views over London.

Entering the park, you can easily see the four mounds – the first of which seems to be the smallest of the four. Passing that we came to the second which was covered in grasses and had a steep dirt track going directly up the mound. After a short scramble up to the top, our breath was taken away not just by the climb but also by the views.

OK, to the north the view is dominated by the McDonalds, and much of the rest is generic London housing – but the view to the South-East is of the whole city of London in the far distance, even right through to docklands.

The Wembley Arch can also be seen peeking over a nearby hill which conveniently covered the rest of the stadium from view. If you look carefully you can also just make out the London Eye on the horizon, although at this distance it is difficult to see against the background sky.

The third mound is the highest of the four – and has a much more relaxing spiral walkway running around the mound. The fourth is plain again and on my visit had several kids with kites on the top. 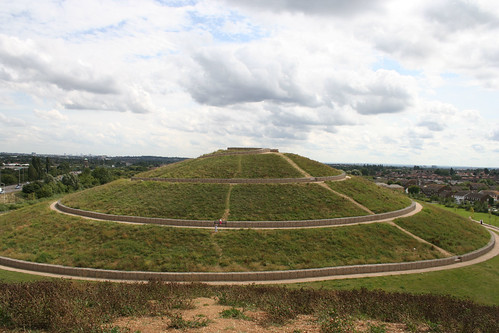 The four mounds themselves were made from building rubble and soil which was piled up into the four mounds – which apart from being visually dramatic also act as a sound barrier from the local road traffic.

To get there, if taking the tube – get off at Northolt tube station and on leaving the station turn right and head into Northolt Village. Once past the village green cross over the road and carry onto the main roundabout and take the underpass to the park.