New recycling bins in the City of London

This crossed my desk this morning and looked interesting – a company which builds recycling bins for use on streets has won a 15 year contract from the City of London to set up 100 bins across the city, for free.

The bins however contain video advertising screens on each side – which is how the whole thing is to be paid for. It may be that they have had problems getting British advertisers though, as the press release stated that they are seeking a “commercial sponsor from the Gulf Region” before they will start putting the units on the streets.

It’ll be interesting to see if they put public transport messages (such as tube line screw-ups) on the video screens.

Amusingly (or maybe not in the current situation), the company, Renew makes much of the fact that its bins are “blast proof”. Based on designs of blast proof boxes used in some places, the sides are very strong and any explosion goes upwards through a thin roof. Being London though, I expect people to stand on the top of the bins during events – and maybe they will break – dumping the hapless people inside the bin?

Painful and unpleasant for them – but please let the incident be caught on video camera!

As an aside – I think it would be good to have recycling bins which allow a split between cardboard and plastic – to take into account that takeaway coffee cups come with a plastic lid. 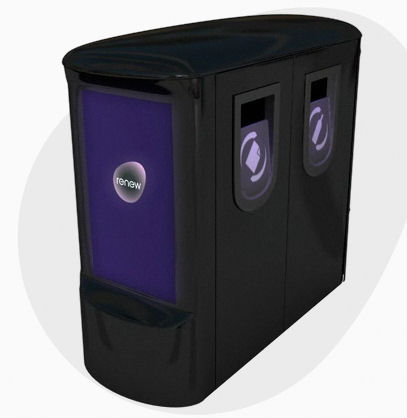