Inspired by people sheltering in the wartime Underground, donated to the people of the East End, nearly sold by a corrupt Mayor and now on display in a heartland of bankers, a new exhibition has opened telling the story of Old Flo. 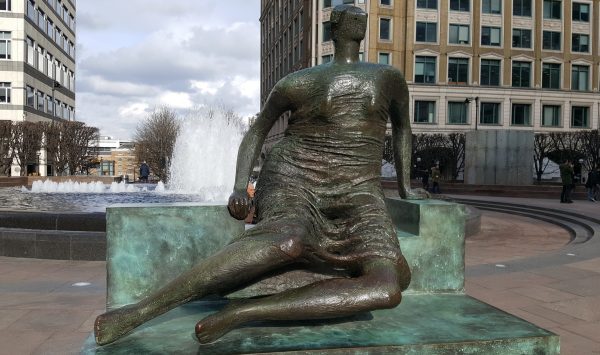 Officially, this is Henry Moore’s Draped Seated Woman, but almost everyone calls her Old Flo, the nickname she gained after she went on display in the 1960s.

Henry Moore as artist and sculptor was fascinated by how clothes folded over bodies, and how ancient sculptors had used drapery to emphasis the human form. This came to fruition during the dark days of WW2 when he was given a permit to draw the people sheltering in the London Underground tunnels, sleeping under blankets draped over their bodies. 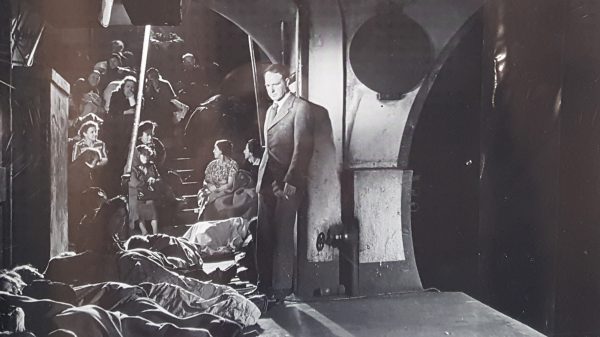 These images were to form a major influence in later years, and on the design for Old Flo.

In 1962, Moore sold Draped Seated Woman to the London Country Council (LCC) for the reduced price of £7,000 so that it could be part of the post-war rebuilding works, at the Stifford Estate.

The LCC Advisory Committee on Art oversaw the acquisition, and works purchased through it were aimed at being held in perpetuity for the public benefit of London residents.

The Stifford Estate was demolished in 1990, and Old Flo flew up to Yorkshire to go on display in the Yorkshire Sculpture Park.

Seemingly almost forgotten for 20 years, what made everyone sit up was an attempt by the now disgraced Mayor of Tower Hamlets to sell the artwork. Hoping to raise £20 million from the sale, Lutfer Raham faced a number of lawsuits to prevent the sale.

It was his own downfall that eventually ended that, and a final legal twist when Bromley Council claimed to have inherited it from the dissolution of the LCC, but eventually, Tower Hamlets Council was officially named as the legal owner, and thoughts turned to where to put the artwork once more.

Moore, a lifelong socialist who took a keen interest in public art and where his works were sited, wanted it to be seen in a poor area – so it’s gone on display in Canary Wharf.

In addition to putting Old Flo back in London, a new exhibition on the ground floor of the main Canary Wharf tower, One Canada Square, tells her story. 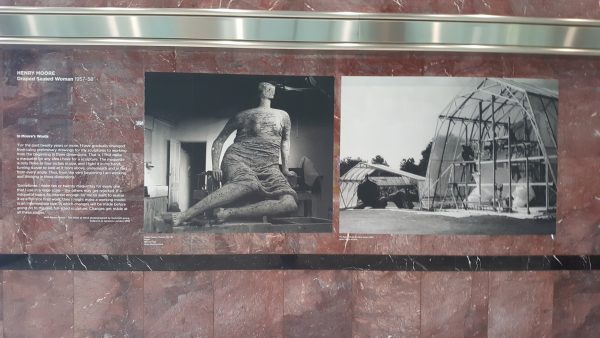 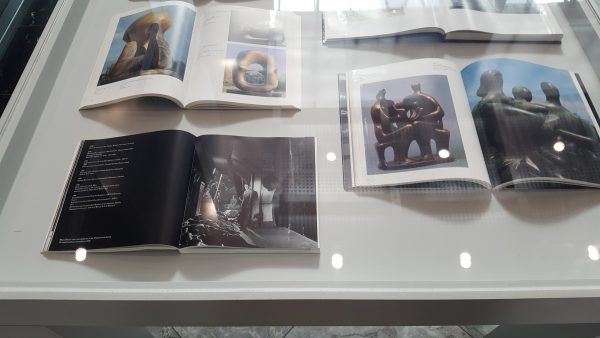 Apart from some photos and a few books, and a somewhat sanitized history that overlooks the recent difficulties, it also includes one of the original scale models made by Henry Moore. 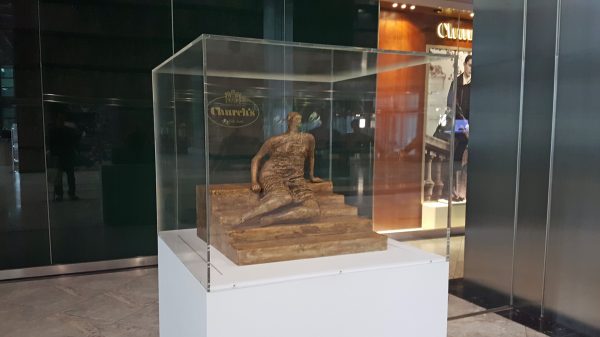 As for Old Flo herself, sitting now near Cabot Place, with a fountain behind to add a decorative feature to photographs, she sits there staring out at a building site across the docks. Young children clamber up, maybe insensitive to the artwork, but in a way that would have been familiar to Old Flo in her Stepney youth.

Old Flo will be amongst the bankers until 2022, when its future needs to be reconsidered, and maybe by then it’ll be able to head to its spiritual home, a council estate in East London.

The exhibition is open until 6th April. 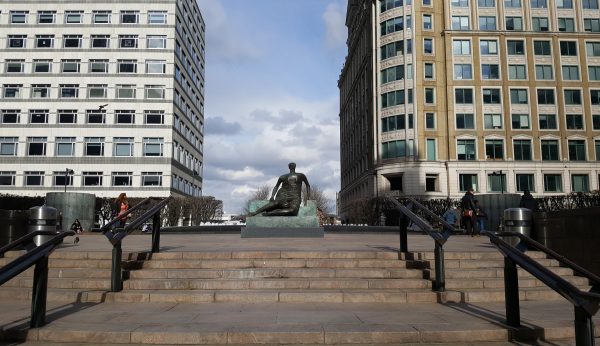