Not hidden anymore since German bombs did such a good job of clearing the ramshackle buildings that clustered around it, the Jewel Tower is still a bit overlooked in an area replete with stone buildings of one sort or another.

Yet, this is one of the few remaining parts of the original medieval palace grounds, and quite an important bit at that. 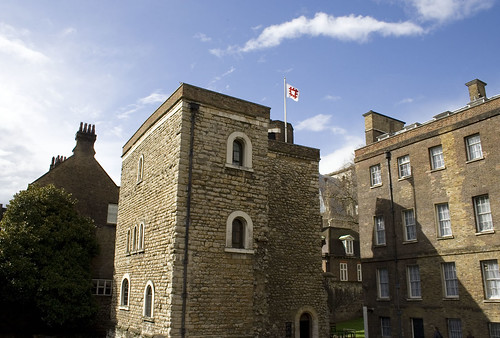 At nearly 650 year old, the tower was built in 1365 to house the Monarch’s private possessions — as distinct from the State’s possessions — so in effect was the King’s personal walk-in wardrobe.

Although it is doubtful that a King visited it regularly – more likely sending someone over to collect the baubles and whatnots that he wanted for the day.

As such it is built very strongly — it is a fortress in design — and is of three floors. A grander entrance floor, where nobles might arrive to collect the King’s goodies, and two upper storage floors – each split into a main and a secondary room.

There was a sizeable display in there last year but that was about Parliament, so they recently stripped that out, and apparently, for the first time, the displays inside are dedicated solely to the history of this building alone.

Visitors can see an ancient Anglo-Saxon sword, a display of weights and measures, as well as a recreation of a 17th century clerk’s office.

Entry to the tower is down a small set of steps to a courtyard area which also happens to be the same level of the ground as it would have been in the 14th century. And also very convenient for the front door today.

The tower is also slightly unusual in that the modifications made to it over the years are themselves very old — the ruinous Victorians unusually left it alone for once. As such, the large glass windows which are totally inappropriate for a fortress were added by Sir Christopher Wren when the building was used as an archive — and the first floor ceiling was originally wood, but replaced with stone to make it less likely to burn down. 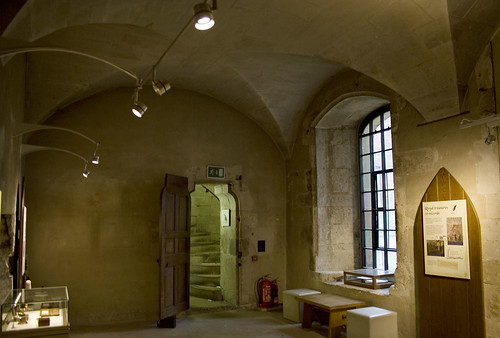 The only other significant change is recent, but invisible — the wooden pile foundations the tower stood on in the marshy ground were replaced by concrete in the 1950s. Sadly, the German bombs that did such a good job in exposing the building also knocked it sideways, and the heritage people of the time thought concrete piles a better idea than wooden piles that had done the job for 550 years. 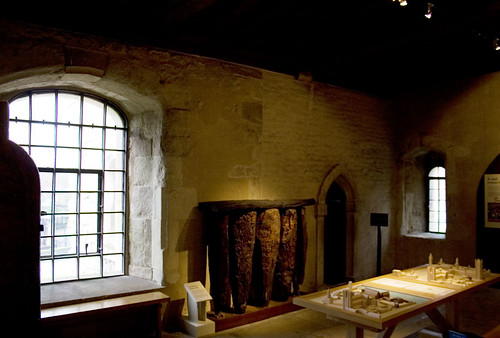 But do look for a few of the original wooden piles that were salvaged and are now on display. And also the more modern bit of wood that have been used to construct a then-and-now model of the Palace of Westminster.

The other thing to keep an eye out for are some stone corbels that date from 1090, and were initially used in the original Westminster Hall as supports for whatever was there before the current vast wooden roof was installed. Taken down, they were just dumped into the walls as filler until later rediscovered and put back on display as an example of medieval workmanship. 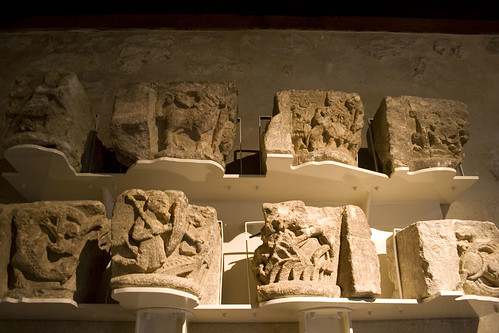 When the main Palace burnt down in 1512, the King moved up the road to Whitehall, and about a hundred years later the tower was put to fresh use — as the repository of the Parliamentary Archives. A stone strong house being rather a useful place to store fragile velum documents.

It lost its role when Parliament burnt down in 1834 and the current incumbent erected in its place — and the archive moved to the Victoria Tower. 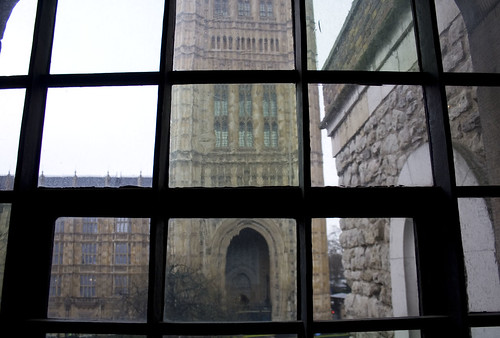 One of the two side rooms has been given over to a small display about the bills that were stored here, and you can pull out scrolls to have a look at replicas. The niche in the corner was a toilet – probably just a hole in the floor to the moat outside.

A toilet in there presumably indicating that a watchman had to be in there permanently? Or that archivists were too busy studying to want to waste time shitting? 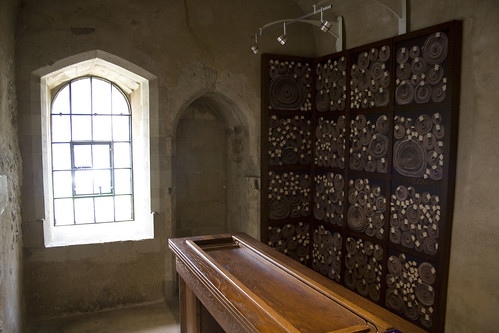 Do notice the doors – unlike the wooden doors used elsewhere in the tower, the siderooms had metal doors, and metal shutters on the windows.

It’s a modest exhibition in a modest but historic building, and one that anyone interested in history will enjoy visiting.

There is a small cafe on the ground floor (just 4 tables), which makes it a useful little spot for a rest in an area of Westminster that is slightly lacking them. But you cant use the medieval toilets, the moat having long since silted up.

The Jewel Tower is open every day of the week, holidays excepted from 10am-5pm.