Crossrail have released a few photos of the construction work being carried out at Tottenham Court Road at what is primarily a London Underground upgrade site, with a box on the corner for passengers to descend to the Crossrail tunnels below.

You may recall more photos taken at the other end of the station though — at the Dean Street entrance to the station last month.

Work on the significantly improved Tube station is now around 60% complete while Crossrail has completed an estimated 35% of works to the station’s new Dean Street ticket hall and station tunnels.

Fitting out has begun at the station and Phase 1, including two new entrances and expanded Northern line access, is due to open in 2015.

Most notable of the new photos from Crossrail is this one of the Central Line interchange tunnel, which you may recall is also having a few little bits added onto it to ensure it is ready for when Crossrail 2 arrives (I prefer when, not if) at some time in the future. 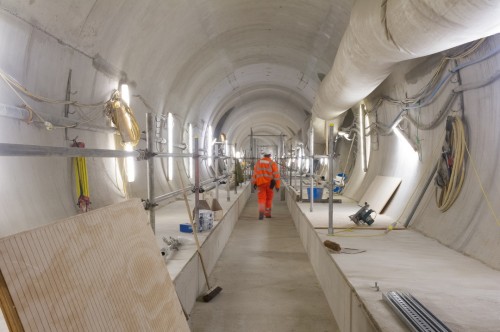 The LU ticket hall being fitted out. 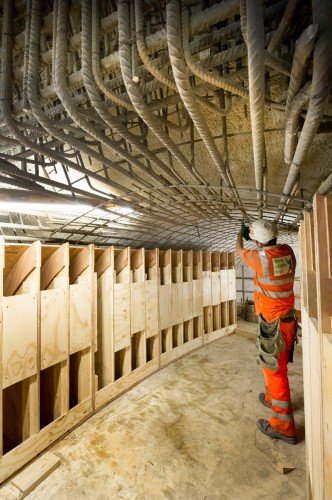 The Crossrail box next to the TCR tube station site being underdug. 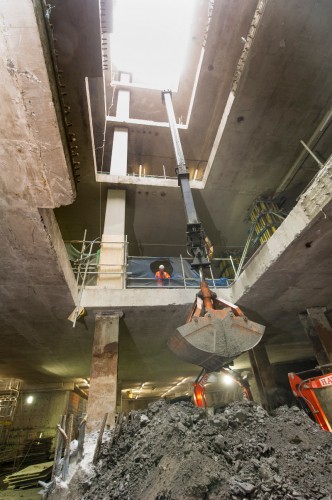 …however, I noticed a mistake about this station the other day. At Whitechapel, the hoardings protecting the Crossrail building site have some display boards, including this photo of the future TCR station platforms. They look very similar to the mock-ups I wrote about back in early 2011. 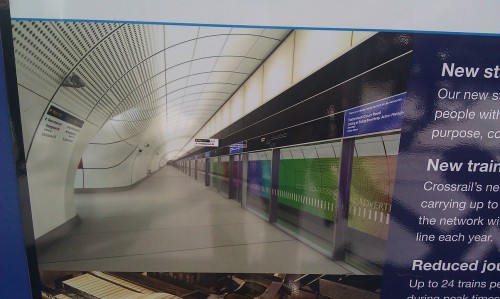 You might notice that the train indicator suggests that the next train is heading Westwards to call at Ealing Broadway etc. So why are the two trains afterwards seemingly heading in the opposite direction towards Shenfield and Abbey Wood?

You’ll never have trains on Crossrail heading towards each other like that.

Yes, it’s just a computer render and not to be taken seriously, and only the saddest of train geeks would have even noticed. And only the really sad ones then taken a photo and blogged about it.