Five new books about the archeology uncovered during the Crossrail project have been published, to add to two previous books that were released earlier this year.

The five new books cover diverse topics including the historic buildings and rail heritage of the Elizabeth line route, the origins and development of west London, a Black Death burial ground at Charterhouse Square and the development of Crosse & Blackwell food manufacturer in Soho

Since construction of the Elizabeth line (nee Crossrail) more than 200 archaeologists have unearthed over 10,000 objects from 40 locations, spanning 55 million years.

The five new books in the series are:

The Changing face of London: Historic Buildings and the Crossrail route 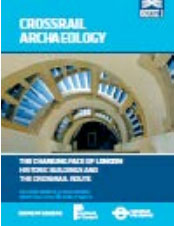 This book considers what the buildings and structures examined in this way have told us about the changing face of London. Each chapter takes as its theme buildings that shared common functions or characteristics, such as the offices that lay along the route of the capital’s new railway or the former industrial buildings that clustered around the tunnel portals. The background to each theme is set out before specific buildings are described and interpreted. Details of the buildings and structures, from pubs to power stations, appear in the gazetteer at the rear of the book.

From Brunel to British Rail: The Railway Heritage of the Crossrail route 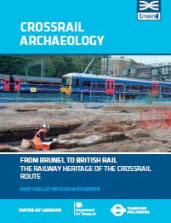 Trace a line across a map of London and one will encounter many historic railways. Railways are more dynamic than people may suppose; over time stations are reconfigured, bridges replaced, tracks re-aligned. Sometimes, whole lines or tracts of land, particularly those associated with London’s freight operations, fall into disuse.

This book presents the results of those surveys in the form of a collection of essays, largely based on the chronology of railway development in the capital. 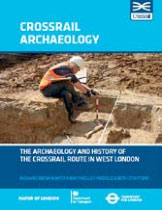 New Frontier. The origins and development of west London

This book shines a spotlight on the history and archaeology of west London. It is informed by the desk-based historical research, site excavations and archaeological monitoring carried out before and during the construction of the western section of Crossrail as it travels below ground from the tunnel portal at Royal Oak to Fisher Street via brand new stations at Paddington, Bond Street and Tottenham Court Road – a journey which includes the discovery of ice age Bison and reindeer, the rediscovery of long lost rivers and reveals the history of the Georgian property developers and the Great Western Railway. 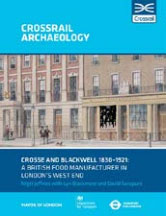 This book explores the excavation and building surveys by MOLA in advance of the redevelopment of the Eastern Ticket Hall at Tottenham Court Road station by Crossrail. It charts the development of one of the great enterprises of Victorian and Edwardian Britain – Crosse & Blackwell. After a move to Soho in 1838, the company built and converted properties for warehousing and factory space, enabling production of its food sauces, pickles, vinegar, jams and marmalades on a vast, industrial, scale. 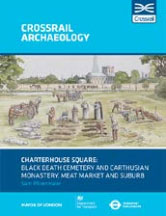 The story of London’s Clerkenwell and Smithfield neighbourhood, from prehistory through to the present day, is explored in this book. MOLA’s archaeological investigations on behalf of Crossrail exposed how this marginal area of London was occupied in the medieval period by religious houses and a cattle market, and then as London’s population began to rapidly expand from the 17th Century, it became a densely packed, crowded suburb.

In total 10 books are planned showing off what was discovered.

The final three books in the series, unveiling the discoveries made during the excavation of Roman and 17th Century burial grounds at Liverpool Street, and the buried prehistoric landscapes of east London, will be published in spring 2017, shortly after a new exhibition showing off the finds opens at the Docklands Museum.

Books looking at a Tudor moated manor house in Stepney Green and the great London shipbuilders, ‘The Thames Ironworks’ were published last year.