At about 1am, on this morning, exactly 200 years ago, a man claiming to be Colonel du Bourg, aide-du-camp to Lord Cathcart walked into the Ship Inn at Dover somewhat wet and and declared that he had just arrived from France by boat and had urgent news.

Napoleon I of France had been killed and the Bourbons had been victorious. The Bourbon monarchy was restored and the British war with France was over!

He ordered a carriage to take him to Deal where an urgent semaphore could be sent to London while he followed on by horse.

However it was a lie, and it was the start of the Great Stock Exchange Fraud that would see the value of government bonds soar, then collapse, leaving a tidy profit for three men.

At the time, Britain, in coalition with a number of other countries was at war with France in what is formally known as the War of the Sixth Coalition — part of the wider Napoleonic Wars.

France was successfully recovering from its disastrous campaign in Russia in 1812-13, and defeated the coalition in a huge battle in Dresden in August 1813. However Napoleon lost the Battle of Leipzig shortly afterwards and was forced to retreat.

He was continually harried by coalition forces as he retreated to Paris. In London, speculation was rife that Napoleon was variously captured or killed, which seemed to trigger the fraud that was to come.

The signal from Deal had arrived in London within minutes of the messenger’s arrival thanks to a network of towers built between London and Deal that could transmit messages by visual flags being used as signals.

As the news of Napoleon’s defeat reached the stock exchange when trading started later that morning, the value of government bonds soared as investors took delight in the prospect of less government spending on war. However, by mid morning prices were falling as the news didn’t seem to be substantiated by anyone.

Then rose again as French men in the city were seen celebrating the Emperor’s downfall.

In the afternoon though, the government formally declared the news to be false. Napoleon was still very much alive, and the identity of the messenger who claimed to have arrived at Dover was unknown.

According to the The Morning Post of the 23rd Feb 1814, the Stock Exchange immediately launched an investigation and found that £650,000 worth of government stocks (debt) had been bought just a week earlier and then sold that morning, at substantial profit of around £16,000 (about £1 million today).

Suspicion soon fell upon the reformist MP, Lord Cochrane. Not just an MP, but a Naval hero during the Napoleonic Wars, and two accomplices.

It is worth noting that all three conspirators had reportedly rented the same meeting house in Grosvenor Square which the imposter arrived on the morning of the fraud.

Following a trial that lasted just a two days, on the 8th June, the three were found guilty and sentenced to twelve months of prison time, a fine of £1,000 each, and an hour in the public pillory. Lord Cochrane was also stripped of his naval rank and expelled from the Order of the Bath.

Lord Cochrane always maintained his innocence, and apparently never profited from the fraud. He was later pardoned, and returned to his naval career. There were allegations that as a reformist MP, he had been set-up by political opponents using the stock exchange fraud as a cover.

The truth of the matter is unlikely to ever be fully known. 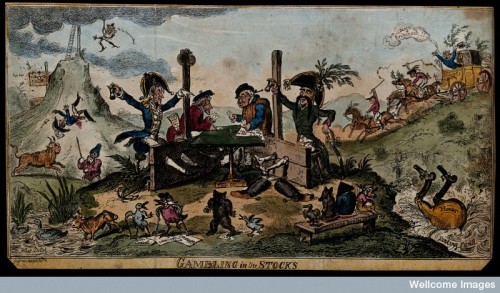 As for Napoleon? Paris was captured by the coalition in March 1814, and Napoleon was forced to abdicated in April, and later exiled to Elba.

As the fraudsters had claimed just a couple of months too early, the Bourbon Monarchy was restored. Government bonds rose on the news.