Published 11 November 2013 by Events and Tours

They’re all dead though — and arrived in London in the form of pencil and chalk drawings.

It was once thought that an artist could only go onto get commissions if they mastered the art of drawing naked men, as that was seen as a key skill in late 17th century France, so France’s equivalent of the Royal Academy has a large collection of nudes in its collection.

Drawing women, clothed or otherwise was not important in those days. 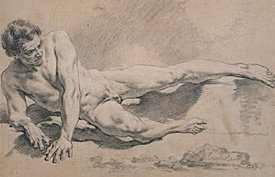 I have often lamented the tendency in modern art to use totally incomprehensible language when describing works of mundanity to justify their exaggerated price tags. Here though, the drawings have description labels that are terse in the description. An austerity of language that is the polar opposite of their modern equivalents.

Here is a “man reclining on a stone”, there is a “man with left arm raised” and over here can be seen “man with left elbow on plinth”. And frankly, what more do you need to know about them. Let the drawings speak for themselves and leave the modern art waffle to the hipsters.

OK, a few have notes that they are representations of famous poses from art history, or characters, but the majority are simple descriptions. What you see is what you get.

Probably the most fascinating two drawings though are in the second room — numbers 35 and 36 of a “man on a rock”. A cursory glance might suggest two artists drawing two different men in similar poses — but no, they were drawn at the same time of the same man. It shows up the artistic brilliance of one who has darkened the image and focused on shadows, vs the other which is clinical, harsh and displeasing to look at.

The other thing you might notice is how the male form in the late 17th century looked very different to how we might see an “idealised” man today. Not for them the thin display of muscle tone and the fat free diets needed to get it. Muscle in the past was bulky, huge and supported by masses of flesh.

Those hoping for eroticism will (probably) leave disappointed — these are architectural drawings with man replacing building, and in general have all the warmth that clinical representations should have. Which is not surprising, as the Academy itself felt that discipline and uniformity were key. As a result, it produced superb draughtsmen, who could later go on to draw buildings as well.

It is however a fascinating exhibition to pop into if in the area (it’s just behind Selfridges), as the technical skills on display are quite something to see.

The exhibition is open at the Wallace Collection until the 19th January. Entry is free. Photography is banned.