For many people, a rite of teen passage is the visit to a pop concert, the formative memories that are looked back fondly in later years.

Last week, in my forties, I went to my first ever pop concert.

Your correspondent has never been a huge music fan, and never really had much interest in paying to see people on a distant stage singing songs I had heard many times before. A hearing difficulty also makes it difficult to hear lyrics as they are recorded today, so I have tended to gravitate towards an odd mix of classical and rave music, with some 80s rock and cheesy pop thrown in for good measure.

I listen to music, on shuffle mode, but would struggle to name the bands or the song titles. But there are a few that I know vaguely and might consider to be a fan of.

One such band was making a rare visit to the UK, and not just their music, but the curiously appealing tie-ins with 1980s computers and travel themes has often made them stand out.

That and their distinctive style – four serious men in suits standing near motionless on a stage manipulating their keyboards with barely a nod to the audience watching them. So unlike other musicians who dance and cavort on stage.

Kraftwerk, in their stiff appearance and adoration of transport and computers is pretty much as close as it is possible to get to being my perfect music group, and what better group to pop my concert cherry.

What I had no idea about — although they’ve been doing it since 2009, is that their concerts use 3D graphics. Had I known, I might have felt motivated to pay for a more central seat.

As it was, £65 for a side seat, with restricted leg-room was probably one of the most expensive tickets to a venue I have ever paid. We all value things differently, but I do wonder how people can afford to go out as often as they seem to.

The Royal Albert Hall, which is not noted for its air conditioning was the venue of choice, in the middle of the recent heatwave.

Squashed into seats, I had the pleasure of listening to the chap behind regale his companion with complaints about the acoustics of the hall and how it was built to have the Albert Memorial on the roof, which would have surprised engineers, as the roof is made of glass.

Eventually, the music started, and the 3D graphics came alive. Old style computer fonts with numbers floating the air and zooming towards you, and some more modern, but still dated appearing computer graphics of floating spaceships were sometimes awesome, and sometimes a bit laughably bad.

What worked that the 3D graphics were rarely in-your-face, but used to create subtle layers on the stage. A Fantasia style musical timeline hanging in the air was exceptional. The 1950s car just about hovering over the stage if you squinted a little.

Now, as a concert virgin I am not familiar with the protocol.

I have been to events where there was music as part of the event, such as charity fundraisers, or end-of-season classical performances, and they are listened to respectfully. I appreciate that nightclubs and the like are different, but this was a concert, so I presumed the same rules applied. You’re here for the music.

Alas, here I was sat next to four people on an Essex Lads Night Out, regularly chatting throughout the evening and liberally topping up depleted pint glasses with fresh lagers.

It felt more like a night in Yates, than in Royal Albert Hall.

To me, having forked out a sizable chunk of cash for a ticket, I wouldn’t mind listening to the music. No one else seemed to tell them to shut up, so seems that behaviour at pop concerts is somewhat different to what I had been expecting, or maybe they were being glared at but no one said anything.

The big famous tracks were performed, but of course the one everyone wanted to hear was The Robots. 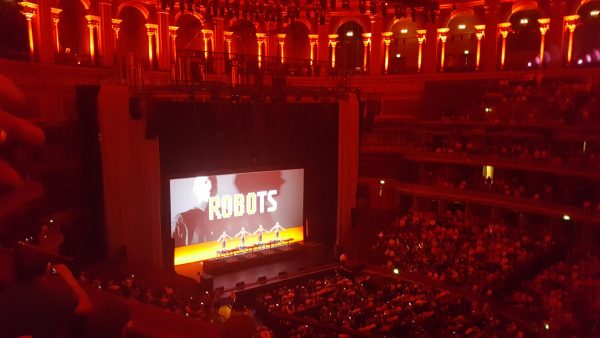 A short break, and the human performers replaced with their famous, and never aging robotic equivalents. The hall erupted with noise and lights, and out came the cameras to ignore admonitions on the tickets that photography was forbidden.

A few more tracks, and the evening was over.

Walking past the detritus of the Yates bar and out into a different world. I am no longer a pop concert virgin.

Did I enjoy it. Generally yes, and it’s sort of nice to say I was in the hall and saw the concert live, but at £65 a ticket, I think it’s fair to say it’s not something that I’ll be able to repeat in a hurry.

And I’ll probably try to find a venue with a no drinks/chatter policy. 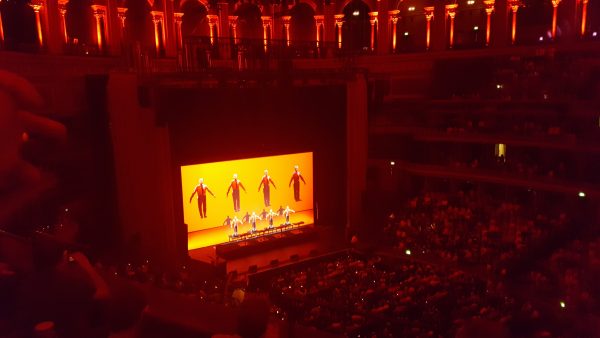