Pedestrian bridges are by dint of a lack of noxious noisy road vehicles a very enjoyable way to cross the river, just look at how the wobbly bridge helped tie the two sides of the river when it was opened.

However, also look at that bridge and notice how popular it is. It is very popular, and crowded, and people tend not to linger overly when walking across it.

Now, here is a concept image for the garden bridge. 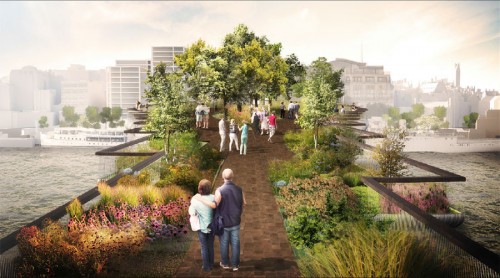 Honestly, that is nothing like wide enough for the passenger flow that it can be expected to carry. I would say that the pedestrian section needs to be three times wider — or more likely, the planting pushed back to the point that they are mere potted plant ornaments instead of being a core aspect of the design.

Not to forget that without walls to protect them, the plants along the edges will be flattened within days.

So, a garden bridge ends up, like so many of London’s gardens, being paved over and a few pot plants used to decorate it.

Sorry, but I simply cannot see this being viable.

But, let me drop an alternative idea into the pot (plant).

There is a place where a huge pedestrian bridge could be built, where funding might be easier to raise, and where it could also radically transform the area.

There is potential for a bridge to be created that is so big that it would have a floor space equivalent to two entire Trafalgar Squares. There could be some light cafes built right on to the bridge itself, and so wide is the bridge, that arts events can be a regular feature of the venue.

I tried making a mock-up image, but my photoshop skills are embarrassing! 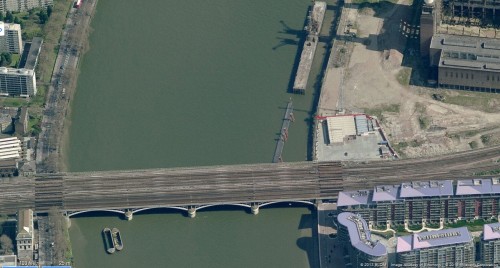 However, imagine the existing railway bridge with a simple flat roof raised above the railways, and a few light cafes erected in the centre. Hungerford Bridge style stairs and lifts at either side elevate people to the plaza-light bridge space.

Except, instead of the Hungerford Bridge hugging the sides of the railway with two slender beams, the Battersea-Victoria Plaza Bridge would span across the entire width of the existing railway lines. Not a narrow pedestrian strip across the river but a pedestrian space that would be wider than the M25 motorway. 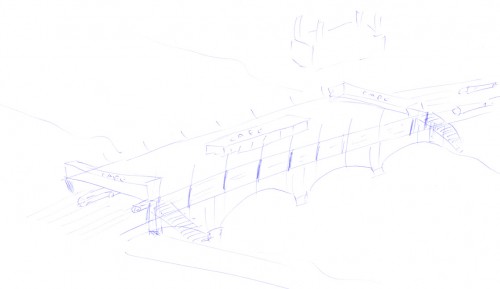 On one side is the regenerating Battersea power station and park and on the other Victoria and Pimlico. There is a decorative road bridge nearby, but the opportunity here is to tie the Battersea development into a huge river crossing with excellent views of the Power Station and along the river itself.

Not the easiest of constructions, with a functioning railway underneath — but equally not impossible. Just needs careful planning.

Thanks to the existing structure, the cost of the works would be reduced to elevating the bridge structure to carry the new roof/plaza, along with likely some structural strengthening in places.

So for probably not a significantly different sum of money compared to the Garden Bridge plans, London could gain a vast new open arena — and in a stunning location.

An arts and cultural space sitting right on top of the river — people would travel for that just as they do today to Trafalgar Square.

It could even have a decent amount of planting on top and be a real Garden Bridge.

Crazy idea, or worth thinking about?