Museum of London remembers the Great Fire of London

A sixth of London’s population made homeless, emergency camps were erected in the fields, proclamations offering assistance to the destitute.

The often unseen side of the Great Fire of London, which marks its 350th anniversary this year is not overlooked in a visually rich exhibition opening at the Museum of London.

Laid out as if it is a 3D version of the woodcut images of the time, the space is dark and licked with graphical flames and the sounds of houses burning, while an experiment in wafting the smell of bread seemed, intermittent.

While there is no doubt where the fire started — in a bakers — the exact cause is still unknown*, with the likely speculation being a tamped down oven sparking and setting light to kindling stacked for the following day’s baking.

It is a curious accident that it was a baker that started the fire, who was based on Pudding Lane, for pudding lane carries a very different meaning from the one you are thinking about. Puddings in those days didn’t mean baked goods, but the offal leftover from butchering animals, and Pudding Lane is where “the Butchers of Eastcheape have their skalding House for Hog there, and their puddings with other filth of Beasts, are voided down that way to their dung boats on the Thames.”

The Great Fire of London started in a street more famous for disgusting smells of gutted animal remains, not the fragrant aromas of baking bread.

The exhibition itself though is experimenting with wafts of the smell of baked bread.

Equally bread-like, if not obviously so is a wonderful animated display showing how the fire spread across the city, as a video projection onto a “pillow” which turned out to be a flat loaf of bread. 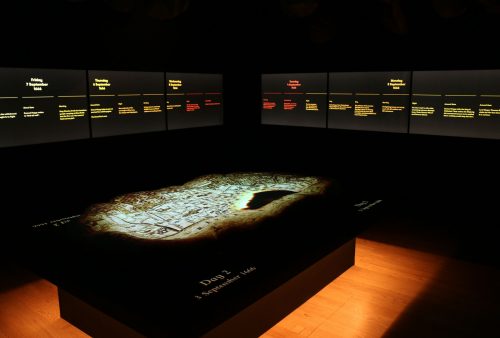 The rest of the exhibition is a bit more conventional, being a collection of objects and signs.

Being a display that is expecting a lot of school visits, the signs can in place be more school than adult, but the little comments dotted around are fun eye-openers. 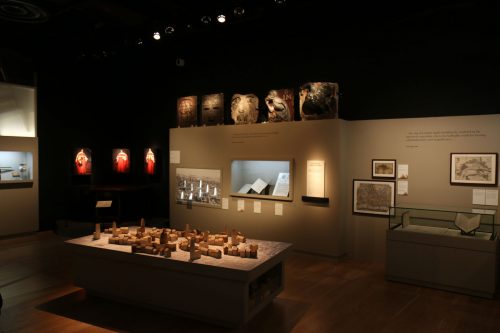 No, thatched roofs didn’t fuel the fire, they were already banned. Despite the scale of destruction, it’s thought that only 10 people died. The homeless refugees in the camps after the fire refused to eat ships biscuits supplied by the Navy because they tasted too salty.

The fire didn’t help stop the plague which was damping down already, but still ravaged parts of London untouched by the flames.

Samuel Pepys references to virginals in boats wasn’t the lustful man eyeing up the crumpet, they are a type of harpsichord, which was exceptionally popular at the time.

In 1979, excavations in Pudding Lane itself uncovered a basement packed full of burnt objects — and a collection of these are on display, from the decorated tiles showing melt marks from the heat to the remains of probably 20 barrels of tar.

Unusually, some of the artifacts are outside the usual glass protections, and you are encouraged to touch the scorched remains of the fire. A tactile moment that creates a real sense of connection to the past. 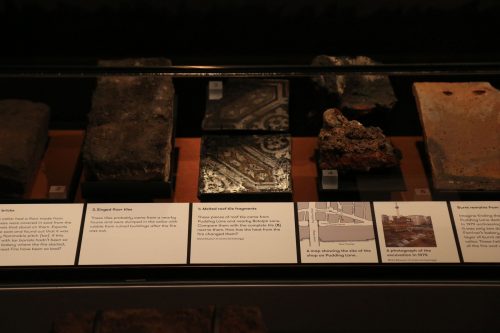 Elsewhere, a collection of charred padlocks, probably abandoned by a locksmith fleeing the fire, and with x-ray’s showing what they look like under the remains of 350 years of rusting in London’s soil.

The padlocks a reminder that valuables had to be protected, from Pepy’s famous burying of his cheese and wine, but also proclamations ordering looters to return their ill-gotten wares, on penalty of death.

Many royal proclamations followed the fire, some of which are on display, covering everything from the setting up of replacement markets in the new shanty town that now surrounded London to demanding a day of fasting, with the money donated to help the poor. 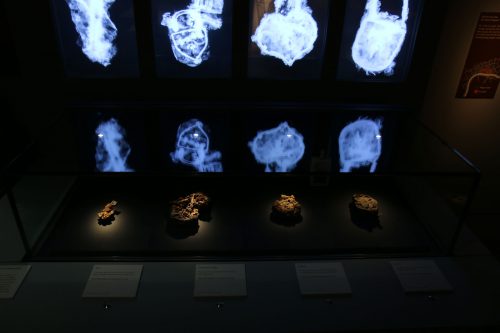 The exhibition finishes, with the rebuilding, of which the great proposed great plans, while the ordinary just got on with rebuilding the ordinary.

Thanks to that, London remained the delightfully ramshackle layout it has today, although it’s worth noting that the streets were often slightly wider than before, as the cash strapped city was able to buy up strips of land and widen roads. Slightly.

A decade after the fire, London was largely rebuilt, and the slum city that had sprung up on its borders to house the homeless faded away into an oft-forgotten part of history.

As an exhibition, it’s a good collection of objects, some paintings and a lot of very nice panoramas of London, including one huge reproduction.

Sadly, there are fewer objects to see than in previous exhibitions, but it is certainly an atmospheric display. 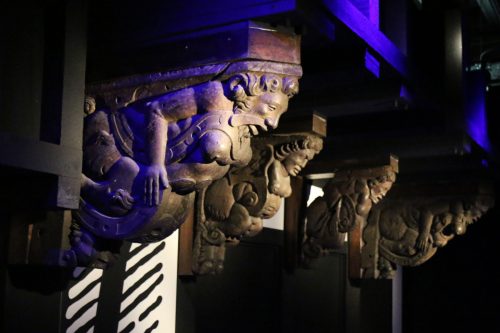 *of course, some of you know how the Great Fire of London started — it was an alien invasion, thwarted by the doughty Dr Who, even if he did burn down the city in the process.