At the moment, the Southbank Centre has a semi-permanent display about the history of the 1951 Festival of Britain, which sort of makes at least one small corner of the estate, a museum for my purposes.

I was actually there to see a model steam railway that is running along the riverside, but more of that later. As I arrived, I was less interested in steam engines than in sating a raging hangover, partially induced by a desire to drink away an attempted burglary into the flat the day before.

The Southbank centre is also one of those places that seems to have more restaurants and cafes than it has entertainment venues, but just two qualify for my own self-imposed rules about where to eat.

The famous Skylon restaurant would have to wait for less-hungover times, so off to the cafeteria style space occupying much of the first floor.

Looking very much like a sarnie and coffee venue, they do in fact serve hot food, and a beef stew was what the hangover needed. Served, rather incongruously in cardboard style tubs with a plastic lid on, and with plastic spoons, its evidently basic fare.

I do wonder about the eco-credentials of using so much disposable waste though.

Anyway, it seemed that a glass of house wine was only slightly more than a coffee, and delivered a suitable hair-of-dog cure all. An eighth of a round loaf of bread to accompany the stew looked more generous than the usual slices of bread offered by some venues.

The tables are municipal, and could have done with more wiping down between customers. During my lunch, all the spare chairs were slowly denuded away by people asking if they were occupied.

There is however nothing quite as lonely as repeatedly saying the shrinking supply of chairs around your own table is free and seeing them carted away by large happy families, one by one, leaving a person stranded on a large table, all alone. 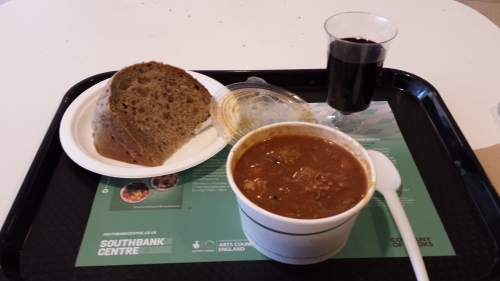 Cost: £8.50 for beef&stout stew, hunk of bread and plastic glass of wine.

Summary: Overall, a basic hot stew at a price not much more than the high-street chains would charge for a sandwich and a coffee, offers a modest escape from the chains that line the riverside.