Popping into the British Museum to have a look at a new exhibition and feeling peckish, I considered which of two options could be tried out. The main restaurant, or the canteen style offerings that fill the back end of the Great Court.

I’ve long liked the main restaurant, but its had a bit of a makeover recently, and the prices are not quite what they used to be, but I was sorely tempted as I fancied something nice, then I remembered, that there is a third option here.

Tucked away in a dark corner is the Gallery Cafe. A cafe that hidden away and not at all noticeable has to be doing something right to still be there. Doesn’t it? Maybe it caters to the regular visitors who stumbled upon it and realised it was a nicer venue than the noisy Great Court.

Well, it’s certainly a lot quieter down in the dark corner of the museum.

Worryingly a sign said that kids eat for free — which actually means the adult portions are priced to include a second serving, or if you are just adults, overpriced to subsidise other people’s kids.

The layout is conventional canteen style, but the food on offer was a bit odd — any four servings from a selection of salads and things, or pizza.

Pizza was explained as being £7.95 which sounded acceptable for half a slice with maybe some of the salad? Nope, it’s for the entire pizza, on its own.

Pizza sliced and slipped onto a plate, and the plate handed over. Surely it would be scalding hot, for no one puts a thin pizza on a cold plate. Do they? Yes, it seems they do.

Alas, while I was in the museum on my day off, Issac Newton wasn’t having a day off, and was vigorously enforcing the second law of thermodynamics. By the time I sat down, the presumably hot pizza had already transferred some of its heat to the plate, and half way through, the pizza was cold.

The only time a cold pizza should be eaten is with a hangover, and having failed to prepare the night before in the required manner for a hangover the next day, the cold pizza was essentially inedible.

Which is a pity for as far as pizza go, what I ate wasn’t that bad. Fairly average, but not inoffensively so. But a whole plate with just pizza is just a bit bland. I’d have preferred half a pizza and a choice from the salads.

As a quiet venue in a hidden corner of the museum, it should be a haven for regular visitors. As it is, it’s a place to avoid, unless you have kids and want a slightly cheaper lunch.

The chairs are familiar though — they came from the Great Court Restaurant, and I’ve always liked them. Sadly, it seems they ended up here following the other place’s refurbishment, and slightly worryingly, the restaurant is now run by the same people as manage the Gallery Cafe. 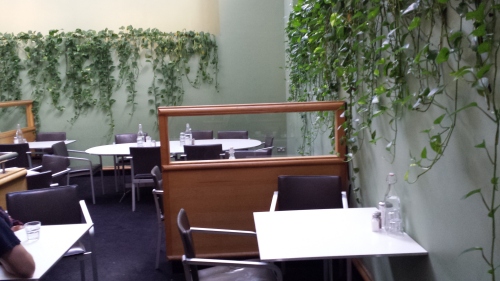 Summary: Very disappointing venue considering the prices charged in what should be a little haven of peace from the crowded museum.