Should a library be included in the museum meals I wondered as I pondered where to stop for a short snack while in the area.

It’s an existentialist query. A library certainly collects relics, often as soon as they are created, and then puts some of them on display. In that sense, it is a museum, a museum of the printed word.

Once, early museums might have been opened to the public, but only after vetting for suitability, and the British Library still vets visitors to its great reading room to ensure they are indeed there to study.

Yet, unlike most museums, here visitors are not required to walk around galleries looking at artifacts, but sit at desks as staff collect the heritage from storage and deliver it to the requester. Then the public are able to not just look at the artifact, but open the covers and manhandle the pages themselves.

So, in a way, the British Library is a museum, but also a very odd one.

As much as visitors absorb knowledge from the books for their brain, their stomachs also need nourishing, so there is a small cafe in the public area that is open to anyone who wants to visit.

Despite the photo attached, the space is quite dark, almost gloomy if it wasn’t also in a space with a massively high ceiling. Yet it is lit, by dozens of tiny lights, for the visitors bring their own lamps with them.

The lamp of Apple, the bulb of Windows, all illuminating the faces of silent eaters in a space that could almost pass for a library itself, if not for the cake and coffee’s being consumed at tables.

The selection of cakes looked as cakes should look, perfectly decorated little jewels hinting of delightful pleasures. When cake is mundane and consumed regularly, it is mere clothing for the stomach, but when a small jewel is presented, it adds luster to the day.

A reasonable coffee, if served in a paper cup that seemed to have almost mythical powers of transferring heat from the coffee to the hand holding it. The surface of the sun is cooler than the gas surrounding it. I think I’ve found its caffeine equivalent.

The cake was delightful, if being served on a paper plate did somewhat dent the presentation, and the coffee was acceptable.

It’s a good spot to stop for a snack if in a area, and unlike many libraries, open on a Sunday. 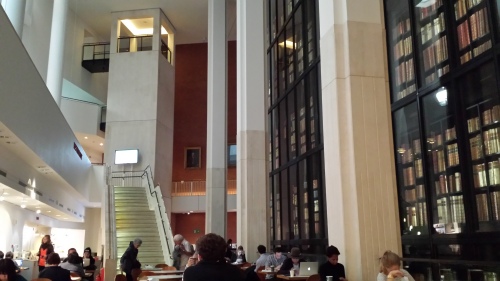 Summary: A slightly unusual place to eat if waiting for a train from the nearby stations and after something less high-street and served in hushed surroundings.