The canteen type space, or the Brasserie was the question, and after wandering past the toilets, a small staircase indicated the Brasserie was above my head. The prices seemed reasonable, so why not treat myself I thought. I did have a hangover to dispose of after all.

Considering the slightly dark approach, the restaurant itself is all glass and light, and a fantastic view over Greenwich Park. The waiter ummed a bit when I arrived as to where to put me… in the nearly empty room, but we both agreed that a window seat would be suitable.

I later realised I had sat facing the sun. But that was for later.

Unbidden, water was brought, and the menu. The daily special being baked cod wrapped in bacon, with cockles and an aniseed butter dressing. A starter of pulled pork with chutney.

The starter took a while to arrive, but when it did, was presented well, and tasted just as good. The pork pulled away in my fork delicately, and the chutneys added just the right amount of flavour.

Another slightly too long delay for the main course, which was a bit, well, somewhat bland.

The aniseed butter had no aniseed flavour in it at all, which wasn’t too much of an issue as it’s not my favourite flavour, but a hint would have been nice. The cockles were delightful, but the cod was, well, a bit like cod often is — all soft textures and no real flavours to it. I had hoped that the bacon would add something, but nope, not this time.

It was a nice meal, but not quite outstanding. The starter blowing the main course completely out of the water.

Service was good, if slow, and the setting with its views over the park, probably best enjoyed in winter when the trees don’t block the view.

But overall, not a bad lunch for a decent price, and a lot better than I’ve had in other venues for similar prices.

Oh, their website is shockingly out of date though. 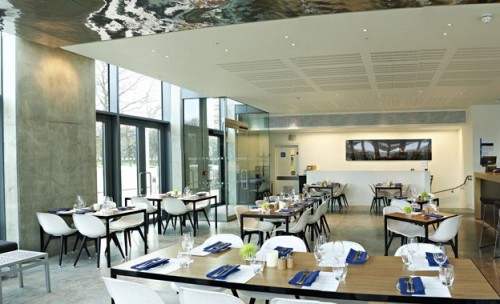 Summary: A not easy venue to find in the museum, but worth finding, for a nice treat when in town, as the food is decent, and the views excellent.

The Brasserie @ The National Maritime Museum