One of the curiosities about writing is that the bland is incredibly difficult to write about. The dire is easy, I just rant for a while. The fairly good is also easy, it was good. The bland sends me hunting for the shoe.

Oddly, the exceptionally good, also has me looking for a shoe, as nothing can be perfect. Only God is allowed to be perfect, as Persian rug weavers will attest to, so I look for the small stone that has fallen into the shoe.

Anyway, pondering where to eat at the weekend, I wandered over to Canary Wharf. A row of old warehouses lines one of the docks in docklands, and at the very end can be found the Museum of London’s local outpost.

Next to the museum, and seemingly nothing to do with it is a place called Rum & Sugar. I had long noticed the almost unnoticeable doorway between the museum and the restaurant but presumed it to be a convenience between two separate venues, but no, the restaurant is actually part of the museum.

Not that you would have known as there is no museum branding within the restaurant whatsoever, and it was only a conversation at the museum’s Barbican outpost a few weeks back that alerted me to the link.

OK, the museum’s Wi-Fi signal is strong inside the restaurant, but as Wi-Fi never respects boundaries, that is hardly an indicator of ownership.

But ownership issues aside, what is the place actually like.

An old brick warehouse with monumental beams seemingly made from Cadbury’s Flake holding up the ceiling, and a decent enough furniture. But at 1pm on a Saturday, less than a handful of customers. Normally, a warning sign.

A special offer of any main course, plus a drink for a tenner is also sometimes a warning, but I plumped for the Shin of beef, on mashed potato, with mushrooms and onions. Plus a glass of house red.

Unbidden, and unexpected, bread and oil were provided, and water with ice and lemon. So far, not bad. And decent, but not overly fussy service.

It takes a while to prepare the food, so the bread was useful, and a chance to catch up on some reading. Some potential customers came in, but wanted feeding within 15 minutes, which proved beyond the venue’s capability.

A couple over on another table had huge plates of fish and chips delivered, which had an aroma that was causing me to seriously want to rethink my order. An order which arrived fairly soon afterwards.

It looked professional. A cylinder of beef on a thin platter of mash, with the rest piled up beside. And the meat just peeled away as the fork touched it. Delightedly tender, the sauce added just the necessary flavours.

The mushrooms had been cooked to that very difficult point where they are still flavoursome, but not too soft, which also applied to the baby onions.

The house red was decent enough.

It was really quite remarkably good. Such to the point of sitting there in some bemusement as to why the place was empty on a Saturday lunchtime.

The fish eating couple having finished were effusive in their praise, and I was no less delighted. I sat there thinking that this was all just too good. Where was the flaw that would bring it back down to earth, to give me something that let me write a piece not sounding like a teenage girl heading home from a boyband pop concert?

The shoe? It took a while, but I found it. The “meal for a tenner” didn’t include the discretionary service charge of £1.85. And even that seems churlish to complain about, as that was a stunningly good lunch for a fraction of what another venue would have got away with charging. 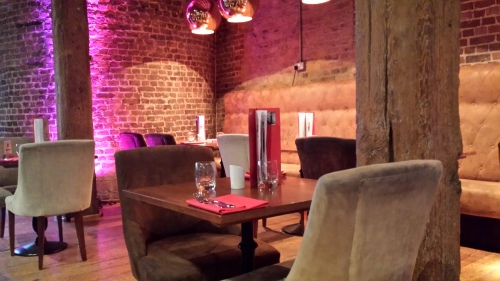 Summary: Even at full price, they would have got a good review, but the £10 offer is frankly, amazing.