This museum cafe is probably one of the most instagram’d cafe’s in London, for its cappuccino coffees are famous for the tube roundel they use as a stencil for the chocolate dressing.

Also, unlike a lot of museum cafes or restaurants, here the brand of the museum carries on into the cafe itself, with tube train seating on the wall benches, so you can eat on a tube train, sort of.

If you are a museum visitor, you might not even know the cafe exists, as it is above the shop you pass through to leave the museum, so I suspect that a lot of passing trade, passes by and out into the cafes and eateries of the Covent Garden instead.

I managed to arrive on one of the hotest days of the year so far, and ordered the Haddock Goujons with Tartar Sauce. I was warned that the sauce was quite piquant, but today that sounded exactly what I was after.

Coffee — and while I rarely order cappuccino, on this one occasion it simply had to be done.

While waiting, an email arrived on the phone, and it turned out that where I had said I would meet someone next week, they misunderstood and thought I mean this week and were sitting in a hotel across town waiting for me. A quick phone call and a decision to delay the meeting meant that I could at least eat lunch, rather than rushing off.

This is a venue that serves lunch on slates rather than plates, which still irritates me a little bit. However, the haddock was excellent. Crispy, but not too deep a crisp, and the flesh was sufficiently moist as to not leave a person thirsty half way through a meal, as some fish can do when badly cooked.

A little cluster of salad on the side with a thin dressing was evidently wilting in the heat, and while the dressing livened it up, the salad had collapsed to a heap by the time I finished what was left.

Another patron was in the cafe at the time, the sort who watches trains, and was regaling tolerant staff with train trivia. Elsewhere, some younger train spotters were being entertained by the children’s meal.

My own lunch was however that good mix of being the right size to satisfy with a good selection of flavours that leave you feeling that you had something nice, not just average. 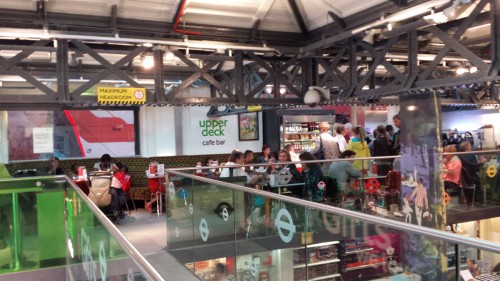 Summary: More famous for its coffees, the food is surprisingly good for a cafe and retention of the transport branding a rare sight in museum cafes.