On the weekend that the new Museum of the Mind opened at Bethlem Hospital in south London, I wandered over to its former home in Lambeth for a bite of lunch.

The former home of the hospital now being the home to the Imperial War Museum, and also as it happened a short walk from a flatshare I was being interviewed for as a potential tenant.

I’ve tried having lunch a few times at the museum, but the canteen area has always been packed, so sending me packing to go elsewhere. This time arriving just before noon, a chance to peruse the offerings and among the decent sounded lunches settled upon a baked salmon.

At least, that was my intent, as after finally attracting service, I was told that only pizza was available. Now in the lengthening queue, I said I would take a sandwich from the other counter instead, as those sounded fairly nice as well.

Asking for the pork sandwich, was told that they also weren’t available –oh, no, there they are, pointing to some plastic covered rolls. Was that it?

Oh, and now with a sizeable queue behind me and being far too English to strop off in a huff I took one from the pile and ordered a coffee. The coffee being not much larger than an espresso did not improve my mood, and by the time I got out of the counter area, the seating was as full as ever, leaving me sitting on the side in what looked like the overflow space.

The roll/sandwich itself was acceptable. A bit tough to chew through, but sometimes a good workout for the jaw is what I am in the mood for. The pork was sadly buried under the texture of the chutney, and even the mild flavours of the chutney were enough to wipe out the taste of the pork within.

The coffee was, well as average as the size was small.

All told, a rather disappointing lunch. I went home, and had a bacon buttie. 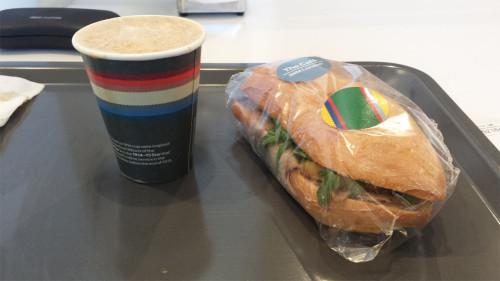 Summary: Indifferent service offering an indifferent lunch. At least it was consistently indifferent.