One of South London’s major cultural hubs is the legacy of the English obsession with a cup of tea although today it is probably more famous for a very badly stuffed walrus.

The Horniman museum is a bit of an oddity, reflecting the eclectic collecting passion of its founder, and as such appeals to a much wider range of visitors than a specialist museum might have.

The museum exists thanks to the legacy of the English obsession with a cup of tea. Frederick Horniman inherited his father’s tea trading business, and spent the money on collecting, and in 1901, donated that collection as the base of what is the Horniman Museum.

As the museum owes its existence to drinking tea, it’s not surprising that they have a cafe, and one that is placed front and square next to the main entrance to the museum.

I was in the area, having dropped off most of my life in a pile of boxes at a flat in Crystal Palace, and decided to walk up to Forest Hill for lunch. On a warm day, the chance to sit outside for lunch was too alluring, and that is one of the advantages here, as they have a covered terrace area.

The outside terrace also does a lot to dissipate the sound of shouting children which echo around the indoor space — it’s a very child-friendly venue.

Although described as a cafe, it is almost a restaurant, with trays for basic purchases, and table service for hot meals.

I opted for some lightly spiced fishcakes, which came with watercress salad and chili sauce. A scone and coffee to finish off.

Sitting outside, on a warm, but not overbearingly so day is a delight. The trees seen through the canopies, and flower bed still resplendent at this time of year. It’s an idyllic setting.

The fishcakes turned out to be the thin wide variety, which I prefer personally compared to the doorstop wedges you can sometimes get. The mild spices added just the right amount of extra flavour that fish can sometimes need.

The salad could have been just a heap of watercress, but a scattering of olives and red onion turned it into something just a little bit better than average. The chili sauce was almost an unnecessary addition though.

Two huge wedges of lemon was overkill for me, but for those who love covering fish in lemon, there is nothing worse than feeling the venue cheapskated on the lemon. Even so, a lemon glutton would have been sated here.

The coffee was just about strong enough to leave its mark, although served in wide bowls that are impossible to carry to a table without leaving the saucer swimming in coffee.

Curiously, they charge 25p extra for milk in the coffee. 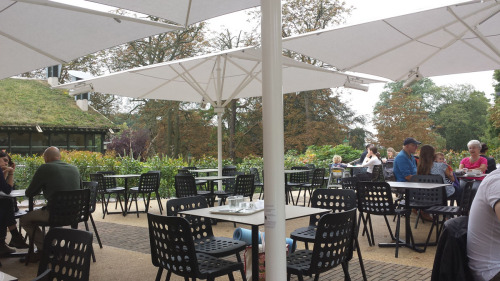 Summary: On a warm day, lunch outside can be delightful, but beware of the noise level if required to sit indoors. The food is family friendly offering quality for parents, and child-friendly options for kids.