The famous picture gallery in picturesque Dulwich village has long been drawing Londoners from afar to this almost rural outpost within Zone 2 of the travel card.

The restaurant though is fairly new and sits outside the gallery, which is wise as the gallery costs money to go into, so the restaurant can cater to passers-by as well as gallery visitors. Being opposite a large park and near a row of eateries means that it has to deliver to a discerning customer base.

I have a habit more by accident than design of turning up just a bit too late for breakfast, but too early for lunch, and this morning, an early rise triggered by a bit of a hangover, and a lack of breakfast triggered by forgetfulness when shopping the previous day had me heading out to seek food a bit earlier than I should.

It wasn’t until I was seated that the waiter explained that lunch wouldn’t be available for half an hour, nor could I order in advance. So I had a coffee and waited while catching up on the weekly Economist.

It’s a nice enough restaurant, and on a reasonably warm day, the side doors were fully open, letting the venue spill out onto the courtyard. Pleasant to sit in, and probably very good for passing trade.

It’s a facet of museum restaurants that some are mere afterthoughts, put in the available space, while others have given some thought to the location. Here, a modern clean building is made enjoyable by the view across the gardens.

Lunch at last, and I ordered the spiced chicken salad, and a glass of wine.

The wine when it arrived wasn’t the one I ordered, but perfectly pleasant so I wasn’t sending it back.

The salad swiftly followed, and arrived as a large soup bowl of leaves and redish chicken slices. My heart sank.

Frankly, the salad was the sort I can pick up in a supermarket, and tend not to as its the sort of leaf medley that I find a bit boring. Interspersed were the chicken, which had a mildly spicy tang, but not that exciting. The roasted sweetcorn seemed to have lacked the roasting.

It was all just piled up in a wide bowl, with nothing to show any sort of presentation.

The volume of the serving was generous, overly so for a lunch. If you like your portions large, and your flavours supermarket, then you would have enjoyed it.

I would have preferred half the volume, and twice the quality.

The coffee was decent enough, and the wine delivered the necessary hair of dog so that I was ready for a bracing walk across the parks.

However, having just spent £23 on lunch, I would have liked to have left feeling that I had something just a bit more special than I could have knocked up at home. 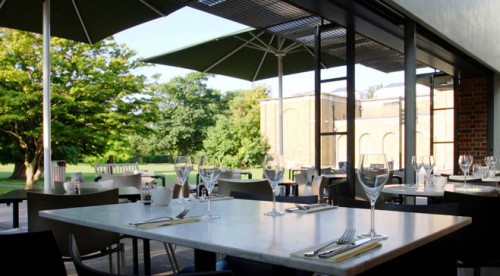 Summary: Uninspiring salad that was acceptable if not overly outstanding at a price that doesn’t justify it. The venue itself is lovely though.