I wasn’t going to list venues you have to pay to go in to in order to eat, but I’ve been in the Palace for other reasons on several occasions, and usually stop off at the garden cafe before I leave.

It’s not that special as a place to eat goes — being really not much more than a generic cafe with sandwiches, cakes and drinks.

What makes it just a bit more special though is the decor, for where else can you sit on a Palace veranda and overlook the largest private garden in London, while sipping a coffee out of a paper cup?

It really is such an odd combination of a fairly cheap style cafe in one of the most exclusive locations possible.

However, as most people would have forked out quite a bit for the Palace tour, and are yet to pass the tourist shop, an expensive posh cafe could have been overkill here. There is some merit in not every museum venue going to the top end in terms of food, and so long as the price is tolerable, why not serve simple food?

Here, the prices are tolerable, just, and yes, do order the cappuccino which comes with a regal crown on top. The cakes are delicious as you might expect if having cream tea and scones in a Palace garden.

Curiously, the knives are made of plastic, which was a surprise, as they looked metal from a distance. It’s a small thing, but at least they looked silver, even if not in fact.

As a cafe, it is reasonably average. As a venue, outstanding. 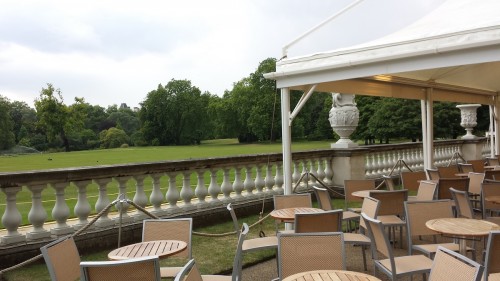 Summary: Reasonably decent cafe as a pleasant way to rest often weary legs from walking around the palace without hurting the wallet too much.