Rarely opened to the public since it closed in 1952, there will be tours of the Kingsway tram subway in Holborn for a couple of months this summer. 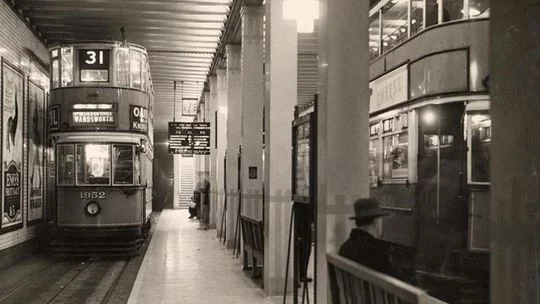 The subway is one of those hidden in plain sight parts of London’s disused transport network, as the slope that runs down to the tunnel is easily seen from Southampton Row to the north of Holborn. From there, it dips down to the tunnel, which once included a dedicated underground stop for the trams next to Holborn tube station, then down to the Embankment where it popped out under the Waterloo Bridge.

Completed in 1908, the tramway was large enough to handle single height trams, but later demand for double-decker trams meant the tunnels had to be substantially altered in 1929. Initially very popular, trams were being replaced with buses and cars, and the last trams in London ran on 5th July 1952 – nearly 70 years ago.

After closure, the Kingsway subway was used to store trams for a while, then in 1958, the southern end was converted into a road tunnel, and part for flood defence controls. The rest of the tramway has sat there untouched save by film crews, artists or for storage by the council.

In recent years it’s been a very convenient site for Crossrail to use for access as the future Elizabeth line tunnels run very close by. It was returned back to its pre-Crossrail state in 2018, and last year, the London Transport Museum was able to run tours for a few weeks.

Now, the London Transport Museum will be starting tours of the tunnels again, in June and July 2022.

The tunnel is tall, long and straight, with the original stone setts and tracks intact. Although most of the “station heritage” is from modern film sets, as a place to visit, it’s pretty high up the bucket list for most people who have ever read about it – if only because it’s so rarely open. It’s also unlike any of the other Hidden London tours as unlike tube stations, the tram tunnels are huge to allow for the double-decker trams, so it’s a totally different experience.

Tours last around an hour and cost £46.50 per person. Tickets will go on sale on Friday 11th March from here.

As well as the tour, the ticket price includes: